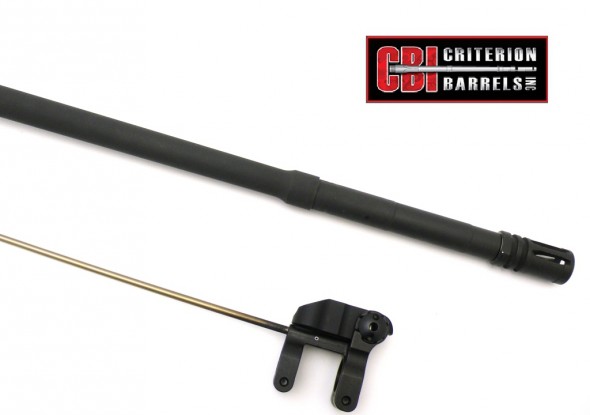 ***If you already read the first article, jump down to Session 2: Ongoing Accuracy Testing. I have changed this article from a first look, to a full review.***

When I was researching stainless steel barrels for my “SPR” style rifle project, I was poking around many forums looking for a solid product for my build. I ran across a name I hadn’t heard before, that company being Criterion Barrels Inc. I shot off an email to the company for a product suggestion and was pointed to the Hybrid line. I told Criterion the barrel would be getting a workout in both competition and in rifle practice. My intended use is for 2 gun / 3 gun and High Power Open Optics classification.

Retail was $269 at Brownells. I won’t lie, I am not a fan of $400-500 dollar boutique barrels, and the price point of the Criterion was more my speed. I am not at a point at my shooting career where I need to sweat competitors over 1/4 an inch groupings. I cannot wring out the accuracy of those products, and… frankly I do not believe most readers need to spend close to $500 on a barrel.

The CBI barrel’s taper from breech to the step is .850 to .690. The gas block diameter is .750. The Hybrid is dimpled from the factory for a gas block.

Properly choosing the right ammunition is a key factor in barrel performance and many chrome lined barrels will out-shoot their owners capability with the right ammo… yet many perfectly serviceable barrels are tossed to the parts bin because the owner believes his rifle needs an expensive accuracy upgrade. I am a fan of chrome lined barrels and I know very well that a good chrome lined barrel will offer great service life and be accurate as 99% of most shooters will *ever need*. Criterion claims their barrel is both match grade *and* chrome lined. Bingo.

Heading out to the range was welcome respite from cabin fever. The range had been frozen shut for two weeks and several matches were canceled due to shooters getting stuck in the range ice. I decided to chance it and park on the side of the road if I had to so I could run this barrel. Luckily, the drive was thawed. Initial sight in was at 25 yards with a waterproof Right In The Rain M16A2 zeroing target and the TA31F.

Working with the rifle at 25 gave me a feel for its recoil characteristics.

I noted that the setup of .093 gas port, 18 inch barrel, and the Griffin compensator resulted in mild recoil. The recoil characteristics put it at the control-ability of my full size heavy A2 rifles while having the advantage of lower weight and shorter length. Recoil impulse was very flat on the vertical plane with little horizontal movement. The taper profile was a bonus to handling; balance was right at the barrel nut assembly. The M4E1 played well with the barrel as well. Zero malfunctions for my initial range session.

One of my initial promising loadings from range session 1

I felt that I was limiting the barrel with the ACOG and my shivering butt, so I wrapped up the ice cold range session and decided to work on a few of the promising loadings at home.

No malfunctions. A good first sign of a proper chamber and adequate port pressure to cycle the weapon in cold weather.

After I ran the gun at 100 yards, I took the gun out to the long course to play with the steel targets. My Ta31F BDC was close with the 69 grain SMK. A lower third hold with the 500 meter marking yielded frequent hits on the steel silhouette. Once the service road thaws, I will be checking my groupings on a B27 with the rifle at 500 yards. Round Count is 75 Rounds of mixed loadings and some XM193.

I originally tested the barrel with a 4x ACOG, but I found it limited my shooting due to a few factors, so I stepped up and purchased a Vortex Razor HD II for this seasons shooting. The change from the 4x ACOG to the 6x HDII was a good change for a number of reasons, including the change from a chevron to a traditional cross-hair style reticle. So I had to start over with new glass and a new range session.

The first time I tested the barrel, range conditions were miserable. I had some promising loadings that I explored further. The second test day was a much better day and the fact that I wasn’t shivering with numb hands *probably* helped my shooting.

Typically FMJ bullets aren’t known for accuracy, but the Hornady 55 grain FMJs have a good reputation. I shot the above group squeaking in at under 1 inch at 100 yards. I am going to try some Hornady Varminters with my next order from Midway. I would like to explore the 55 grain stuff further with this barrel.

Another promising loading from last range session was with the sierra 60 grain varminter. I ran 23.8 grains of 2230 to get this group which was actually supposed to be a five shot group, but I miss counted and shot a sixth. Group size was 1.1 inches skipping the 6th flyer. Stepping this one back to 23.5 grains might we a wise experiment based on my first range session. Round count this session was 150 rounds with some reloads, but allot of Federal 233J as I was shooting the steel targets for a blog video. No malfunctions.

Still cold, but not as bad as last time!

In order to prepare for the re-opening of my rifle ranges 0-700 yard line, I took the barrel with me for some more testing. After reading the article MOLON on AR15.com wrote about smaller group sizes, I decided to shoot a 10 round group with a 69 SMK and 25 grains of Varget. I switched to VARGET for accuracy testing as I wanted to take advantage of the powders temperature stability and sure enough, it tightened up groups further.

I believe two rounds went through the same hole in the main body of the group. I discounted the left most shot as a true flyer. I accounted for all 10 brass cases so this was ten shots. Impressive. Very tight group and the amount of rounds fired eliminates the statistical problems of 3 shot groups. In summary, this chrome lined barrel can do amazing things. This is from bipod prone with the Vortex Razor HD II. With the Criterion Barrel, you will have a barrel well suited for a SPR and yet have the longevity of a chrome lined barrel.

I believe this barrel does justice to my idea of a modern rifle. I wanted to build a rifle that breaks from traditional builds of the HBAR SPR style builds vs the M16A4 clones or the like. Both of those are fine to build, but I was set on building something lighter, better handling, and just as accurate from a practical perspective. The Criterion Hybrid really fits well with the spirit of the build by offering me a balance between the weight of a HBAR and a Government Profile yet giving my do all rifle plenty of accuracy for any event.

Overall, this barrel should be suitable for any task you could throw at it. For 3 gun builds, you have an chrome lined, accurate platform that should give you a long service life. For shooters looking for an SPR barrel, the barrel is lighter than full HBAR profiles and has plenty of accuracy for precision shooting.

I will continue to update this review with range sessions and accuracy tests linking it to the blogs main feed.

← The Designated Marksman and the Prepared Civilian Part II: On LooseRounds.com
Is the Sierra Tipped Match King the Best Choice for the AR… ever? →
Scroll Up