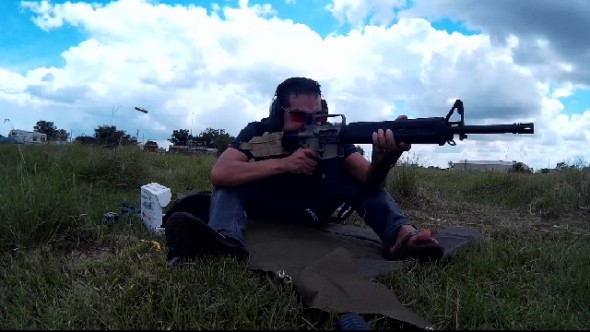 I made some major changes to my rifles a few weeks ago, requiring me to quickly re-zero at 25 yards. My local gun club is shutting down, so I had a family friend mow his private range so we could get in a few quick shots.

My A2 Rifle was recently visited by a really crappy receiver lapping tool called the Wheeler Engineering Delta Upper Receiver Lapping Tool, which you should never buy. It isn’t square, but I tried to use it for an honest review anyway. In short, it did the job but its a really crappy product that wobbled horribly in use. I went slow with it. Agonizingly slow… and finally my receiver was trued.

The reason I purchased this steaming pile was when I noticed my barrel was canted in the Larue 12.0 that I installed about a year ago. It was canted left and my sights weren’t quite set in the center of my rear. Well, now they sit pretty nicely dead center on the rifle, but I would caution people to avoid the Wheeler lapping tool since it is clearly out of square and wobbles like crazy when put into the drill.

So now that the “why I had to re-zero a perfectly fine rifle” is off my chest, I took my rifle to a neighbor’s house and threw down at 25 yards on a Rite in the Rain Zeroing Target. While the target is set for meters, I wanted to zero in yards, and thus I am supposed to zero at 25 yards with 11 clicks of rear elevation from a bottomed out drum to equal around a 400 yard zero at 25 yards… at least according to my ballistic calculator. My rear sight is 1/2 x 1/2 minutes and I am using M193 from a 20 inch barrel. Once I have access to another 100 yard range (my local range is closing) I will confirm the zero at 100 and make any necessary fine adjustments.

Things went swimmingly. This is slow fire prone at 25 yards off a magazine monopod position. I couldn’t ask for better as the rifle was zero’ed after 20 rounds. 5 for initial, 5 for first adjustment, and then on the new target  you see below, 10 rounds for a final count.

I think I got Ivan. Slow fire, magazine monopod, no sling, A2 iron sights, m193.

I then moved on to a sitting unsupported rapid fire sitting position to brush up on my position shooting.

You can still learn good things at 25 yards. Sitting with my feet too wide allowed my elbow and upper arm to slip off my leg. Bringing my feet closer together will form a more stable platform to shoot from the sitting position.

I was generally happy with the results, but for whatever reason my cadence was forcing my more consistent shots to the right. This is something I will have to examine, but I do know that my arm fell off the side of my knee when taking the second shot, so I need to work on a sitting stance that keeps my arms from rolling off the rounded part of my knee. I have seen High-Power shooters cross the legs at the ankles, but I find whenever I wear boots (this case not withstanding) I have a harder time getting back on my feet quickly when my feet are crossed. I used the cross leg position in my High-Power match a few years ago, but since I hadn’t practiced the sitting position in a while, I lost some skill in its application. Since I don’t like crossing my feet, I will instead bring my feet close together to accomplish the same effect and prevent my arms from rolling off my shins.

25 yards, rapid fire, sitting. Notice half my shots are consistently to the right. This could be that my natural point of aim was not quite correct during this rapid fire string, or it could be that recoil was moving my muzzle to the right, and as I brought it back on target I fired too quickly before settling back on the center of the silhouette.

Yes, you can learn things at 25 yards with reduced range targets. No it isn’t a replacement for real KD shooting, but using targets like these can still be revealing for things such as controlling your rapid fire shot cadence, examining your stances and shooting positions, and for helping you diagnose problems with your technique. At this range session, which was a short range Session (get it? both ways haha… right. back on track), I still took away something valuable. My sitting position needed work, and now I have corrected it with a sitting stance that brings my feet closer together. I still don’t like crossing my feet, but keeping them close together accomplishes the same effect while making it much easier to leap to ones feet.

← Kalashnikov Acquired: How Does One Modernize an AK-47?
Atibal XP8 1-8 5.56 with SwyftView Lever Coming in Oct →
Scroll Up