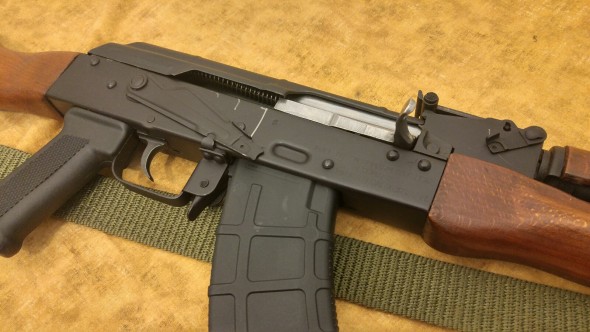 “Modernize” a rifle. Utter these words and purists recoil in fear. Many Mosin Nagants, jungle carbines, lever guns, and countless other guns fall victim to being “modernized” every year. Mossberg, you are guilty.  It’s ok to modernize a rifle if you do it right, but as of right now the phrase is actually more akin to “how do I turn rifle X into a AR15 analog?” Running a AK these days seems to involve bolting on lots of expensive accessories that were designed for the AR15… and skipping over the low cost Russian gear that made the AK attractive.  We have tons of AR15 stock adapters, quad rails, keymod and M-Lok rails, ACOG mounts, fancy grips, all made for the AR but bolted on to the AK. With the assault weapon ban over 12 years in the past, the boom of rifle development has given us some great gear for both the AR and AK… but my question is, why do I want to accessories the AK when I could have gotten a lighter, more accurate, more thoroughly developed AR15 instead?

By simply buying an AR in the first place, I would benefit from:

I am sure you can think of more reasons to choose a AR15 in the first place, but this blog is not about downplaying a perfectly capable weapon system, instead I seek to realize the potential of a rifle and help shooters make the most out of it. No doubt, I prefer the AR15 to the AK. My first experience with a black rifle was an AK and I thought it was the bomb until I obtained an AR15. AK-47 type rifles are simply outclassed by the modularity and 12 year boom of AR15 research and development… but some people just don’t like AR15’s, or they want something different. I gotcha. So here we are.

Hold up! Let’s keep this AK looking good and upgrade it with smart upgrades that don’t make it look like a plastic disaster!

I have an old AK. I want to shoot it to the utmost of its capability despite its reputation as an “inaccurate” rifle.

So how do we best configure an AK-47 type rifle for a rifleman? Do we spend $1000 + dollars on upgrades, ACOGS, RAILS, and FANCY STUFF? No. I will not be doing that. I believe if you have an AK, one of the benefits over the AR15 would be overall cost of the system, optics, and bullets. While prices for the AK have climbed, 7.62×39 has remained fairly cheap, and Russian accessories are also quite low cost compared to our equivalent American gear. I am not going to turn this handsome rifle into a wanna-be AR15 when I have several AR15’s already. Having shot this rifle extensively in the past, i am going to move fairly quickly on the upgrade path by choosing gear that actually makes a difference in weapon accuracy and effectiveness.

Here is a plan breakdown:

I will keep the internals stock except for a ALG trigger. I will use Russian glass such as the PSO series or a Russian prismatic to attach directly to the side rail. A quality trigger and good optics enhance a shooters accuracy, and are without a doubt one of the best upgrades a rifleman can make… hence, they will be added to the AK as well. Low magnification glass is a boon to intermediate range shooting and the low cost to quality ratio of Russian glass will keep costs from climbing too high.

The AK optics rail will be utilized with a Russian PSO type optic since these optics are priced well and have valuable features… and are authentic to the AK platform.

Furniture will be left mostly stock for now. Perhaps I will add a fixed MOE Magpul stock since it appears it will cut down a bit of weight over the fixed wood stock. AK magazines from MAGPUL will be my primary mag since they will cut down the weight a bit over steel magazines. Of course, ammunition plays a key role into accuracy potential of the AK, so aside from the standard issue blaster stuff from wolf, I will be using some quality factory ammo for testing purposes to wring out the best the AK has to offer.

Modern Magpuls vs Old School steel. The rusted AK magazine is a Vietnam bring back from my late father in law. He mentioned it years ago before he passed, and upon clearing his stuff we did indeed find his magazine.

The AK is an exciting platform and this is going to be a fun project. I hope to take the AK to a High Power match for fun so long as the moons align. In examinig the AK we will look at ballistics, look over the weapon with an attention to detail, and properly evaluate the AK as a rifleman’s weapon. I won’t stop writing about the AR15 so don’t worry… but keep your eyes peeled for some AK action.