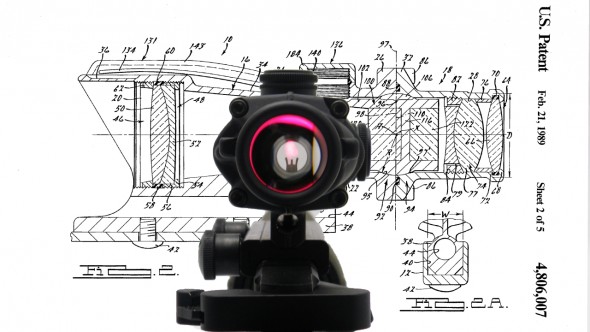 2008… that’s the year the ACOG’s patent protections have lapsed. So why hasn’t someone given us true competitor to the throne? Why has the market failed to respond with an answer to the ACOG?

Trijicon has given the shooting community, and our country, an impressive catalog of optical tools. No doubt, Trijicon makes some very unique products that you cannot find anywhere else. The ACOG was patented in 1989 and it slowly became the prized AR15 optic among the shooting community, law enforcement, and military. Having owned one myself, it is indeed a tough, lightweight, optical powerhouse. I spent years saving for one… and eventually I capitulated by putting it on the credit card as life kept getting in the way.

Why are these things so damn expensive?

In 2005 the Marine Corps acquired “104,000 scopes at $610 each” in 2005 as part of their rifle combat optic program. That’s a huge deal and shows the power of bulk pricing, and the value of the contract is obviously worth it to Trijicon who can still make a profit while producing the optics for $610 dollars a piece. That same optic costs us $1358 with the latest price coming off Amazon.com. Keep in mind that the contract for the Marines ACOG includes a Ta51 mount, RCO killflash, carry pouch, and bikini covers.

That’s all included with the military’s order too.

Searching around on the many gun forums can lead some insight into what dealers pay as well. Some dealers mention markup varies and that one pays around $700 for his ACOGs. Obviously pricing tiers play into the factor of the ACOG’s cost to the dealer. Huge orders mean better pricing. One thing we all pay is Trijicon’s MAP price. Dealers cannot sell below a price point that Trijicon deems acceptable.

With the price of bulk military orders in the $600 dollar range, it makes me wonder what the profit margins are on the ACOG. After all, the design has been around over 20 years. The forged housings and the R&D related to that process must be long paid for. The optical assembly has rolled off the product line for 20 years as well. Trijicon is making good money. So why hasn’t someone made a product to challenge the market supremacy of the 4x ACOG?

One company to take immediate advantage of the patent lapse of the ACOG was Browe. Debuting sometime in 2009, which equates roughly to the year after the patent lapse on Glyn Bindon’s Optical Gun Sight… Browe set to work developing a version with newer technology and more whiz-bang features: a titanium housing, electronic, automatically adjusting brightness, an auto wakeup, a two-way I/O and power port, and a auto wake up feature.

The Browe Combat Optic: Notice the two piece housing, the turret placement, and overall form factor. This is among the first example of a post patent ACOG introduced to the market. Yes, it is a “ACOG”.

It’s important to note that the Browe shares the same form factor as the ACOG because it’s based on Glyn Bindon’s design and is run by a former Trijicon employee. This is a direct competitor to the ACOG as it *IS* an ACOG, just not in name. It also shares the short eye relief of the Trijicon 4x product. One problem with the BROW system was how strong it came out in the price department. With the costs of starting a new company, and the cost of establishing its own product line, plus the research and development, the cost was above Trijicon’s lineup of comparable models… many people saw the BROWE as a more expensive ACOG.

Civilian sales are important… and Browe quickly moved to introduce a Sport Optic model, but I would have preferred a BROWE push back directly against Trijicon’s TA02 series with a simple brightness dial instead of all the electronic wizardry. Another route would have been to attack the TA01 and TA01 NSN series with the ACOG form factor and the glowing reticle instead of the 34mm monocle thing that Browe instead developed:

The Browe Sport Optic with glow in the dark reticle: This should have looked like the BCO above and should be priced to compete with the TA01. But it doesn’t and it doesn’t

So Browe has given us the ACOG re-imagined as a whiz-bang, feature filled, high-tech ACOG. They just don’t have the decades of recognition that Trijicon has and they need to find a balance between the high-end titanium optics, the middle “BTO” line which directly competes with Trijicon in price, and the low-end sport optic that just doesn’t seem to be taking any ground from Trijicon’s cheapest line of ACOGs.

There are two other similar 4x optics on the horizon which may incorporate some design elements of the ACOG into their production, but little is known about them as of yet. Lucid’s new P7 and Meprolight’s vaporware 4x combat optic from Shot Show 2013… neither of which have hit the market as of yet.

The Lucid P7 4x has some similar design elements to the ACOG but I cannot say for sure if its design lineage is a result of Glyn Bindon’s patent.

So Browe is the most obvious example I can think of as an example of utilizing the patents of Glyn Bindon. The company may as well be the direct offspring of Trijicon. The others listed bear a passing resemblance to the ACOG, but I bet it’s not just a passing on the inside.

There are many examples of *other* fixed combat style optics such as the Leupold Hamr, the ELCAN M145 and Specter series, and several others such as IOR Valdada… but these don’t necessarily share in the design of the ACOG and companies like ELCAN have been competing with Trijicon for military contracts for decades. Many of the brands mentioned above have neither the price nor familiarity to really steal much of the market from Trijicon. The SpecterDR has a great military pedigree, but let’s face it… this is a optic out of reach for most of us.

So what other ACOG’s alternatives are available to the average man?

The Prismatic Invasion from Overseas:

Remember that NCSTAR lawsuit? NC Star claimed they were introducing a 1:1 clone of the Trijicon ACOG line and they were quickly sued into saying “sorry!”. This was in 2005. I have no idea why NCSTAR would think its a good idea to do something like this without researching patent law. Patent number US 4806007 A hadn’t expired yet.

What it reveals to us is that China has copied the ACOG for a long time:

A trip over to ALIBABA.com can reveal a girth of ACOG clones and multiple other OEM prismatic designs used by Burris, Primary Arms, and Vortex. Many of the ACOG style clones are blatant rip-offs… oops I mean legitimate copies of the ACOG. They are legally legit now because the patent ran out and we should accept the forces of the semi-free market. Because Capitalism.

Many of these clones are both cheaply made and likely to be horrendous quality, especially at 79 dollars. The scary part for Trijicon is if an individual takes a trip to China to import these after strict QC measures are put into place… That would spell trouble for Trijicon. One company (redacted per company request) has really pushed into the red dot arena by introducing red dots from overseas with strict quality control measures and his products have proven to be wildly popular, and they are no doubt stealing sales from established companies like Aimpoint. These red dots have gotten a reputation for durability at a low price, and that’s because of the additional QC the company puts into the product.

I could easily see this scenario playing out for 4x optics. Every cheap clone sold is potential money taken away from Trijicon. As a civilian market, we should be over the clone issue, especially for a manufacturer willing to up the quality. Civilians need quality optics at all levels, especially for those among us who have a desire to be prepared yet have to work around a low budget.

Atibal is yet another company working away at their take on the ACOG. Their 4x prismatic is a direct ACOG clone without fiber optics, and Glyn Bindon would recognize it immediately. I have handled this one side by side with a ACOG and yup… it shares many design elements including the prism assembly. It’s now being assembled in the USA for a better handle on QC.

Here is the thing: the ACOG is a near BOMBPROOF design, so if it is among the best, and most robust optics ever designed, then clone away! The market will separate the wheat from the chaff.

It’s only a matter of time before Trijicon will be releasing a SPORT model. Too many competitors are coming to the market. In the last few years at shot Trijicon has introduced new toy after new toy to build up their product line and I believe that was in response to the patent lapsing on the ACOG. Everything they produce is tough, and military grade… but it seems that every product they have introduced has been judged against their flagship product.

Trijicon will eventually need to follow a similar path to AIMPOINT and add a better priced model such as the PRO. I see a nicely priced TA01 in the future… and perhaps it will have a glow in the dark reticle and be somewhat affordable. I would be more than happy to slap another GENUINE Trijicon “sport optic” on my rifle…

Because one thing the other companies can’t replicate is that pedigree.