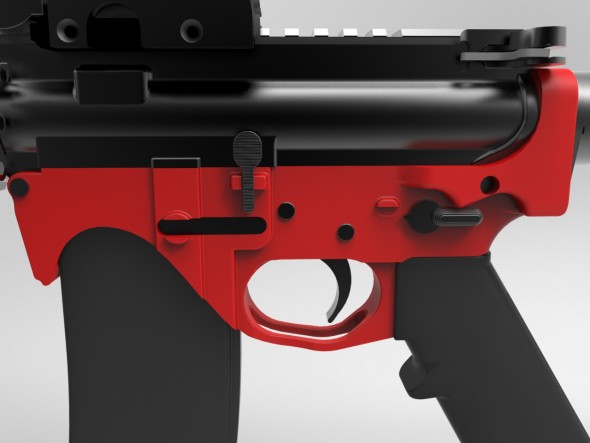 Printed AR lower designs continue to evolve. The process is largely an iterative one, driven by trial and error, with the errors exposed by testing. This photo shows you a handful of the iterations that have been tried, rejected, and improved, and tried again.

This is hardly the first time iterative engineering has been applied to this 60-year-old design. Armalite modified the prototype AR forging for greater strength where prototypes were weak, and Colt modified production receivers for greater strength where service found them vulnerable to failure (i.e. from Model 601 to Model 602 to 603, and from 603 to 703; for the last, compare the profiles of the buffer tower and front pin areas of an M16A1 and A2 lower receiver).  In just the same way that Colt reinforced the lower receiver of the M16 for greater service durability, the experimenters working with FDM plastic lowers have reinforced those same vulnerable areas (and others) to adjust for the different  properties of their material, relative to the forged 7075 aluminum alloy of the original.

Note the reinforced buffer tower and greater material thickness near the top of the control cavity.

Right now, they’re getting the strength back by simply beefing these areas up and changing shapes and angles to eliminate designed-in stress risers. In time, it’s possible that an arrangement of ribs or stiffeners may provide the required strength while allowing material usage and print time to be reduced again, but for right now, it looks like a lower with massive lugs in the front, a cut-off mag well, and reinforced areas along the top of the control cavity will get the job done.

We don’t have info, yet, on the performance of the FOSSCAD Vanguard in the field, but it does build in to a firearm:

Another goal of the tinkerers has been to improve the build-ability of the lower on ordinary, consumer-grade 3D Printers. The first working lower receiver was printed by Have Blue on a commercial Stratasys machine that cost a king’s ransom when new. This example was printed on a DaVinci 1.0 printer, a unit  that uses 0.6 kg filament cartridges and prints only in polylactic acid (PLA) plastic. It’s made by XYZPrinting in Taiwan and is available for $500 from Amazon and other resellers. As the Amazon reviews should show you, this is a low-end printer indeed. Yet, it produces a functional Lower Receiver.

The JT Vanguard on the DaVinci print bed, with support material that is readily removed.

This is one genie that cannot be re-bottled. The technology is marching inexorably toward greater capability: more speed, better resolution, better materials, lower cost. Luddites like California’s Governor Brown and State Senator Kevin De-Leon who would ban this technology are the equivalent of the Stasi, trying to keep East Germans in line by registering typewriters lest someone express an unauthorized idea.

Even the mighty shoguns of Japan, who had power that today’s power-lusting politicians can only fantasize about, could not arrest the march of technology — they could only delay it, locally, and at the cost of national weakness.

Meanwhile, while California politicians are winding up to throw their wooden shoes into the machinery, technology stays ahead of them on fleet feet — probably shot in Made-in-USA New Balances. Manufacturing’s not dead, but some states can kill it locally if they like.

I thank www.printedfirearm.com for this guest post. Printed rifles are yet another step that furthers our cause. The cooler the technology is, the more fascinating the AR15 becomes, the deeper it will root itself into our shooting culture. As we see more and more printed iterations of the lower receiver, we see more and more developments which will, hopefully… one day, allow us to print the rifle from beginning to end. At that point, what does it (gun control) matter? – Lothaen