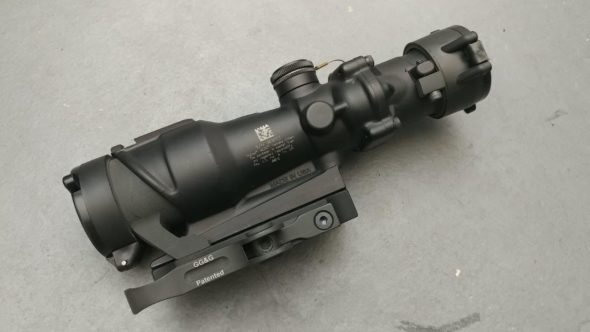 The ACOG is tough. It’s also expensive. When I was shopping for a mount solution I wanted nothing more than a quality quick detach RTZ mount… I mulled over a few options but none seemed that impressive. A mount does a job which, in theory, is simple… it holds an optic to the rifle and allows it to return to zero if removed and replaced. What if the mount can do more? The GG&G Accucam brings us a mount which protects your ACOG and offers near best in class RTZ. Let’s check it out:

The GG&G Accucam is a well made, well machined mount with an an excellent fit and finish. The body of the mount is anodized smooth black, and the steel hardware is phosphated grey. The lens mounting system is a grey delrin component with a flat black sheen.

The lens cover mounting system really sets the Accucam apart from its competitors. Acog owners have relied on the ARD killflash to protect the front of the assembly. To get the factory kit together, you need to spend around $70-$80 to install a Trijicon ARD, with the factory front, and rear lens cover. It’s also held in place by a large o-ring. No thanks.

GG&G fills in the gap with a robust assembly that bolts the front lens cover directly to the mount and then uses the included hardware to bolt the rear assembly on to the RMR mounting bosses. Buttler creek lens caps are included front and rear.

Butler Creek front and rear lens covers are included with the kit.

Installing the ACOG required a touch of blue loctite on the included mounting screws and torquing to 20-25 inch lbs. The front lens cover structure slides into the ACOG’s objective with a satisfying and smooth ssshhnnnk. No light penetrated the assembly when the front cover is closed. It’s a perfect fit.

The mount itself is comprised of a aluminum base, a steel cam lever, steel “flex plate” and a steel clamping foot plus the various steel screws. The method of attachment involves the cam pulling the steel clamping foot into the rail which then forces the opposite side of the aluminum base into firm contact with the upper. The steel flex plate flexes as the cam lever moves towards its closed position… resistance increases until suddenly resistance drops to zero when the cam lever is near the closed position.

The Accucam has a large QD lever, but it is secure and not even thick brush could catch and open the mount. See my video review supplement for more details.

Another feature to note is that the cam lever features a curved hook to assist in opening of the lever. I attempted to force it open due to interference from foliage, but was unsuccessful. It hugs the rifle tight enough to prevent inadvertent detachment. It’s also tough to open. When the lever is in the closed position, it’s secure.

In use, the Accucam system featured no bad behavior. It attached securely to to the rifle and returned to zero when detached and re-attached. M193 and a 4x optic isn’t going to allow a scientific test of RTZ, but I was back on target without issue every time I placed the optic back on the rifle. To get another viewpoint, let’s head over to Recoil Magazine. In their thorough test, the Accucam system beat PRI, ADM, GDI, and even Larue in RTZ testing. Awesome.

My only concern in use is that the extra length added to the rear of the optic can occasionally touch your glasses. In slow fire, or a relaxed range session this isn’t an issue. Without glasses, it is a non issue. Only when your shooting fast and bringing the gun up quickly did the Buttler creek cap tap the lens of my RX. I found that I could simply twist off the rear lens cover and place it aside. This gives me and my glasses enough breathing room to mount the rifle and fire in quick succession without contact.

What I like about having a lens cover on the ACOG is that it not only protects the glass, but there are some additional benefits: The front lens cover acts as a deep sun-shade and cuts glare. What else? Saavy shooters know that a hole drilled in the front lens cover works as a killflash and reduces parralax error on longer shots. Alternatively, if you leave the cap intact it can allow a fiber optic ACOG to be used as a Occluded Eye Gunsight. There are numerous little tricks that can be accomplished with a front lens cover, and the GG&G gives you access to those tricks should you wish to take advantage of them.

The GG&G Accucam is a great mount for the 4x TA01 and TA31 series ACOGs. The integrated lens cover system is an enhancement which is sorely needed on the ACOG. No other mount that I am aware of actually helps protect your ACOG from damage and for that I am going to give this product a thumbs up. It makes the ACOG feel like a complete system. My only concern is that some users might find the rear can occasionally touch their glasses, but that is easily rectified.

I realize there are plenty of great mounts on the market… I want to share the GG&G with readers due to its innovative lens cover system and its exceptional RTZ capabilities. It does the primary job a mount must do, and it also protects your glass. This is a awesome product and I am glad I can show it to readers instead of the two or three mounts we see recommended over and over. They do the same thing. The GG&G Accucam does more. Check it out here. Be sure to shop around as it can be had at a cheaper price at several online retailers. Expect prices from $148-$160 ish.

Disclaimer: The GG&G Accucam was sent to me for T&E. I have no financial relationship with GG&G. The above experience is true and accurate. I experienced no malfunctions or failures with any component of the GG&G system. The New Rifleman LLC takes great care to ensure accurate and truthful reviews.