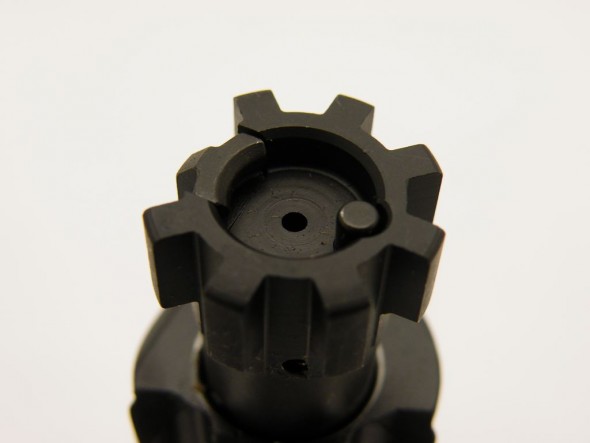 The Ar15 bolt has been the subject of numerous studies, and numerous enhancements that deviate away from “Mil-Spec” with the intent on improving the life of the bolt. Long held to be the weakest link in the AR15 design (right next to the magazine) the bolt has to be held to tight tolerances. The intricate surfaces must be both strong on the exterior for long wear, yet ductile and flexible at the core to mitigate shock and reduce cracking of the steel. Numerous attempts have been made in an effort to cover this Achilles heel. Let’s have a look at some of the products that claim to enhance the standard AR15 bolt:

The two lugs adjacent to the extractor, and the cam pin drilled through the center of the bolt… these are the trouble spots. If a bolt is going to break, its likely to be one of those two areas. The Knights Armament E3 bolt is largely considered to be the be all, end all of bolt development. It handles both trouble areas with smart re-design which specifically targets the trouble areas. Claimed bolt life exceeds 20k rounds.

While such a design is desirable, it is not a drop in part, as the use of the KAC barrel extension is noted as a requirement. To run such a system effectively, buying the KAC upper receiver group seems to be the best solution if you want the E3 system. That Proprietary Life Tho, AMIRITE? Drop in is more my flavor. After all, I like to build my own rigs, and I like to share systems that are in reach for most shooters, not just the Doctors and Lawyers. – See it at KAC here.

The LMT Enhanced BCG is a long running bolt carrier, and has been around for years. It is a radical re-design though it does not design itself out of a standard AR15. Note the radiused edges, the shiny coating, the ooh-aah lobster tail extractor, and numerous other changes. Bill Alexander made the most succint and elegant quote on the design:

The bolt itself is of particular interest. The function of the dual spring extractor is frequently misinterpreted as an attempt to add spring force to the extractor claw. Rather it reduces the fatigue that the extractor spring(s) undergo by allowing the use of longer springs with lower K values; the % relative compression during the movement of the extractor is reduced. Remember that additional extractor force is not required now that the carrier is slowing the extraction cycle. The mitigation of stress in the bolt is accomplished in several ways. Material is the least visible change but is important to the design. The traditional Carpenter 158 is abandoned, being replaced by a significantly tougher grade from a different manufacturer. The lugs themselves are generously radiused between lugs and at the rear the diameter is actually reduced to allow a larger transition radius to be machined. The incorrectly identified sand cuts on the lugs are stress relief cuts. These allow any individual lug to elastically deform and give a smoother load over the contact patch. While this type of feature is very difficult to calculate and even more difficult to implement it helps to place the lug in a true shear load rather than amplify the bending moment. As noted the lug opposite the extractor is relieved. This feature prevents the unequal transfer of load to the two opposite lugs but I would argue that the stress relief groove already in place largely accomplishes this purpose. This is a academic quibble so I will bow to LMT in this respect. There is one additional feature that can be found in the bolt, but I am not at liberty to disclose the detail. – Bill Alexander

Wow, thanks Bill! The LMT bolt is no slouch, and is still an industry standby… though as a product ages it loses some of its initial WOW factor. Having owned this bolt, I can say it is NICE. Retail is roughly $179 so it makes it a much more reasonable upgrade over a E3 upper. LMT claims to have never had one break, though I have found user references noting that the dual extractor springs have deteriorated and broke… so does that count? I think so. Regardless, as long as you buy a few of the extractor springs for such a rainy day, the LMT will be quite reliable. – See it at LMT Here

Another quality design with some chops, JP has been producing their version of the enhanced bolt group for a number of years as well. Appearing less radical than the LMT, it boasts superior SAE 9310 steel, thickened cam pin web, and super duper extractor springs and gas rings. Form the photos online, it looks like it was tumbled for so long it became smooth as a babies bottom. It kind of reminds me of chocolate coated marshmellows. Silky Smooth. Soft. But this one is a forbidden marsh-mellow. It will kill. Or at least it will lock and unlock with boring regularity. What else can we ask of a bolt?

-See it at JP here

Issued as patent # 6,044,748 in May of 2000, is the improved Armalite bolt. You say “Armalite doesn’t have a improved bolt!” Or do they? Fool, you think you have wasted more of your brain power on obscure Ar15 nonsense then me? Sit back down and listen. Back in the day when Mark Westrom owned Armalite, he made a series of improvement and was granted patents on several of his designs. One that snuck in (which is just a footnote in black rifle history) is the recessed bolt lug. According to Armalite, recessing the rear bolt lug opposite of the extractor reduced load to the two bolt lugs ADJACENT to the extractor by quite a degree. In the Armalite technical note 13, we can read about the improvement on point 4:

This is such a simple design change, that if true, results in a superior product. Smart engineering has given Armalite a product improvement with very little deviation or radical changes to the bolt. Indeed, it looks identical to standard bolts… but reducing the load of the two lugs that most often shear is no small feat. – See it at Armalite here.

This one has been on the market for several years and claims to have superior strength compared to a standard bolt thanks to S7 tool steel. The redesigned locking lugs are also an obvious change from a standard bolt. I am a bit hesitant to list this one as the Sharps Rifle Co. is undergoing bankruptcy and re-structuring, so I would ask anyone who wants to buy one at the blowout pricing on their website to understand that the company may or may not be there to pick up any CS issues. They also had a product recall on a few brittle bolts a few years ago… but that seems to be taken care of. If you want to give them a shot, grab a bolt at blowout clearance prices while they last.

The Relia-Bolt™ compensates by providing a patented camming action which guides the bolt past obstructions and into battery. (U.S. Patent No. 9,863,729) The rounded/tapered lugs push past carbon and debris when the square edges of traditional bolts would typically jam. Once into battery, the rear edges of the lugs fully engage the barrel extension for absolute strength and security.

The Relia-Bolt™ is machined from S7 tool steel and tempered with SRC’s proprietary heat-treating process, significantly increasing strength when compared to MilSpec Carpenter 158. S7 provides a 75% increase in tensile strength, and nearly 60% improvement in yield strength.

-See it at Sharps here.

What the what? That’s right, Lambda technology has worked with army RDECOM in the past, and found that bolt life can be increased by up to 2x normal life by simply roller ball burnishing the lug fillets. This is not currently available from any manufacturer that I can recall, but the process deserves a place in the article as it is both interesting and a true improvement of the standard issue M16 bolt.

So there is a brief overview of the state of the improved Ar15 / M16 bolt. There are numerous other designs that have come and gone… and of which there is little information remaining. (denny’s guns thunderbolt is a prime example) As the AR15 platform has reached a plateu of development, it’s important to consider that for less than $1000 we can build a state of the art rifle with numerous upgrades, bolt included, for the price of a “premium” factory rifle. As I like to say, no one manufacturer has the best of everything. To get the best products in each component category requires you to jump between brands, and requires you to do your research.

if you would like to do some more reading on improved bolt and carrier groups, click here to read Chris Bartocci’s 2015 article in Small Arms Defense Journal. It has some more great information about some of the items we discussed so check it out.

Thanks for reading! None of the MFG links above will earn us any commission they are just links.

If you want to support the blog, click on one of the banners and do some shopping at Brownells, MyMedic, or Palmetto State Armory. We will receive a small percentage of the sale, and we will turn that $ into content, *magical* CONTENT. Literally Unicorns shooting content out their… Well. Nevermind.