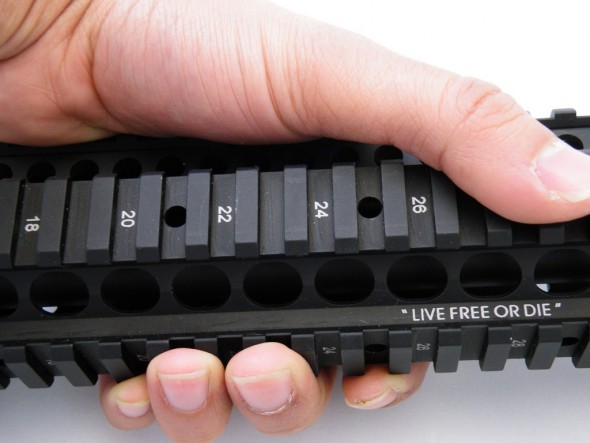 This is not a review of the new LAT or SAT rails. I have no idea how someone thought this was the case.

87 fails to them. 🙂 The review below covers the Larue Quad Rail which has been out for centuries. That is all. – Your Friendly Host.

The Larue 12.0 rail is considered a “classic” rail. It isn’t the most modern, or the lightest, but quality…  absolutely 100% yes. The Larue 12.0 is set to be a part of my AR15A2 project. I decided to add a few upgrades to bring my A2 up to speed so I can use it at both CMP matches and Tactical Rifle matches this year and onward. As of right now, CMP legal rails need to be of a certain diameter and feature four picatinny rails at 12, 3, 6, and 9 o’clock. No key-mod allowed yet folks.

While the quad rail style might be going out of style, the Larue 12.0 accomplishes two goals: it is CMP legal based on the measurements given to me by Larue Tactical, and it free floats my barrel.

The thing that strikes me about the Larue is how precise it is. You can observe the quality of the machining. Take a look at this article hosted on www.thetruthaboutguns.com and look where the author compares the Larue rail vs the competitor. Pretty striking. While that precision won’t affect the shooting I am going to be doing, it is nice to know you are getting something that was built by someone obsessed with getting things right.

Installation was like many other rails. Pound out the taper pins at the front sight base, slide end cap assembly and barrel nut down barrel. Torque until the next gas hole lines up. Install rail. Lock in place with end cap and anti-rotation assembly. Re-install front sight base. If you have a workbench, some punches, a vice, and a hammer… you can install a rail. Make sure the barrel is immobile before you pound the taper pins out.

I was advised by a member of a certain government-funded shooting team that a *very popular* rail system on the market tends to break under sling tension. I was informed that the mounting system has been a failure point on this particular rail. I decided that the way to play it safe would be to go with an older, well established “tube” based rail and thus I purchased the Larue.

Snatching up quality used gear should be second nature. While the 12.0 is an older rail… CIRCA 2004… the quality is there. Don’t be afraid to get good “old” gear cheap on equipment exchanges. Let other people do the beta testing of the new stuff.

Whats next for the AR15A2 project?

Then it’s time to play ball.

← Building the Parts Bin AR Part 1: Reliability
Need to Pre-Order a VIS-KM from Vltor? →
Scroll Up