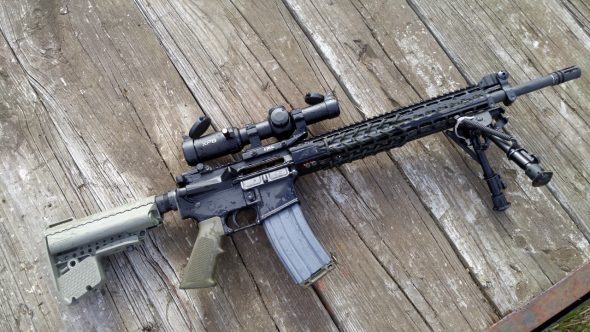 My original excitement over the M4E1 was clear in my first review. I had obtained my first non-standard upper receiver and rail system and I had high expectations for the product. So how has it held up?

Exceedingly well. This rifle accompanies me withe every range trip and has been a flawlessly operating machine. The interior of the upper receiver remains smoother than any other rifle I have handled and it just got smoother with use. When I say smooth, I mean to say with a standard bolt group and an A5 receiver extension kit, pulling the charging handle feels slick with the spring, buffer, and bolt unlocking consisting of most of the felt resistance.

The Torx screws have remained firmly in place with ceramic Rock Set and the hardware has not rotated out-of-place since the first install. No hardware has loosened or fallen out.

Teludyne Tech uses the M4E1 as the upper of choice for their Straight Jacket barrel system… which we will test in the coming months. Excited? Yes.

Furthermore, after discussing the system with Teludyne Tech, they noted they appreciate the product as it is a forging with excellent engineering characteristics. I had *no idea* the receiver was forged and going back to Aero’s webpage, sure enough, it reads as such in the description. Where have my reading skills gone?

The M4E1 is also a good value from a cost perspective. The M4 upper comes in at about $150 with the free float rail selling separately for $140 for a 20-inch version in M-Lok or KeyMod. Comparing to high-end rail systems, it’s far cheaper than many of Daniel Defense’s products, cheaper than Larue, and far cheaper than the awful cost of some of the popular Geiselle products as well. I own a G Mk4 and its a nice setup, but its performance has not impressed me more than the M4E1 system from a cost to performance ratio.

The 12-inch rail and upper weigh a joint weight of 19.8 ounces which is directly competitive with the weight of any modern aluminum competitor.

I stay impressed enough to float the idea of obtaining another M4E1 set for a full-length M16A4 improved build I want to do in the future. Why? Because its clean, well-balanced, and it is a great free float platform.

I still recommend the m4E1 and believe it has a part to play in a modern AR15 build which follows evolutionary manufacturing principles that reduce overall part count, simplify the assembly process, reduces system cost, and possibly increase system strength.

In short, it still rocks. Get the upper for $111 for a blem over at Aero Precision.

For another take, look at what Texas Plinking has built with their M4E1 review. Really solid-looking build and it covers the M4E1 in detail.

Note: I don’t make a commission off any sales from Aero’s site, but that’s a good deal to try out this equipment.