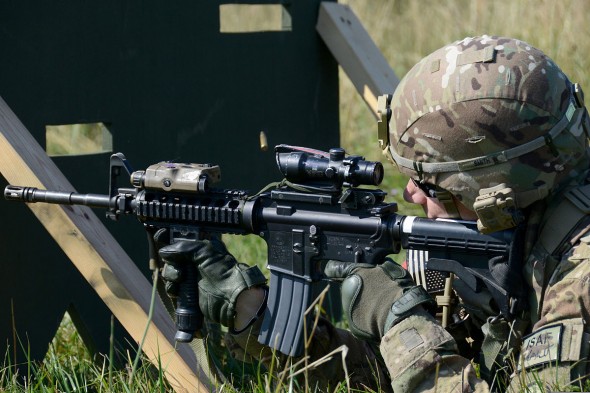 These posts are a little old, but they are worth mentioning. Jeff Gurwitch at www.defensereview.com discusses how closely modern military weapons and competition 3 gun setups can closely mirror each other. One of the more interesting notes is that while there is much crossover, 3 gun competitors utilize muzzle breaks much more whilst the military men utilize surefire flash suppressors. Makes sense.

I also like what the author says about KISS rifles:

Before I cover accessories, I think I should bring up one popular concept in regards to rifle setup, and that is the KISS principle: Keep It Simple Stupid. In its strictest interpretation, this means avoiding optics and electronics that could fail during use. I think I should address the “KISS” rifle concept because, despite its popularity with some civilian tactical/defensive shooters (see the numerous threads on AR15.com and m4carbine.net discussing “KISS” rifles), most soldiers are choosing rifles set up with anything that can help them consistently engage targets better and faster. In fact, today there is little difference between a soldier’s tactical rifle and an Open-class 3-Gun competition setup. – Jeff Gurwitch

Please check out these two links, they are rife with information that can be utilized in examining your weapon setup.

← Variable Optics Guide is Done
Working on Another Guide! →
Scroll Up