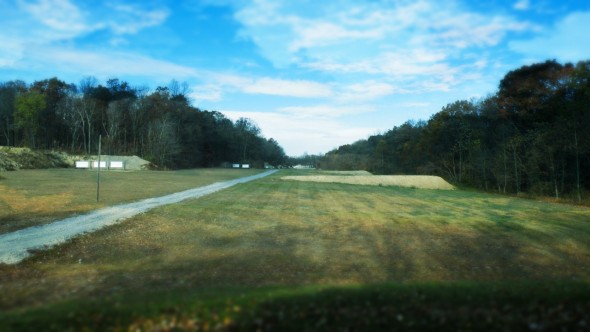 I read about plenty of shooters who pat themselves on the back for hitting a target at 400-500-600-700 yards with their SBR in 5.56 or .300 blackout. These shooters have come to the conclusion that their beloved SBR can do anything a rifle can do. I would venture to say *most* shooters understand the limitations of their chosen system. Some shooters are quick to point out that their SBR, Pistol, or blackout can shoot just as far as a full size rifle and will do so while being shorter, lighter, and 20% cooler. I will admit that for self defense, these compact systems make lots of sense.  However at extended ranges… short barrels just don’t stack up against a musket. No matter how you slice it, they will be inferior in performance on real world unkown distance targets. Let’s set the stage:

Compact weapons are handy. With the .300 blackout SBR craze, and the Sig brace,  short-barreled rifles and pistols have exploded in popularity. Until recent years, short-barreled 5.56 ARs were hampered by limited ammo choice, but that has been partly corrected by heavier loadings such as 77 grain Mk 262. These heavier loadings make the SBR a far more capable machine and no one will argue that these heavier projectiles don’t improve performance at all distances.

With the intro of .300 Blackout, we have witnessed yet another surge in the popularity of this versatile caliber in the AR platform. These guys too, are very proud of that the .300 blackout can reach 600-700-800 yards. “Why, we can all be like Travis?! Sign me up!”

There are plenty of similar videos on YouTube just like Mr. Haley’s demo here. More minds become convinced that SBRs can hit targets at any distance, and that long guns, you know the thing we used to call rifles, are not necessary and antiquated. Well, let’s cut to the chase: Your short gun is not as good as a rifle at those same distances. Both hit the target right? So what gives?

At known distances, modern optical sighting systems allow you to dial in dope with an extreme degree of precision and repeatability. Punch in your data, and your I-phone can tell you exactly how many clicks to go up in order to hit that silhouette at 900 yards… Likewise, bdc systems give you instant satisfaction from hitting steel in perfect conditions.

The difficulty comes when the shooter is in a field scenario where he (or she) is under a time constraint to hit a target of varying size presentation at an unknown distance. At this point, if our target is going to present for only a few seconds, there is little to no time to dial in dope or to accurately estimate the exact target distance. The target may be oblique, down low, or may not fit our BDC at all (such as a person at the extremes of height, or a deer, hog, etc). Our chance of hitting that target at unkown distance will be highest with a projectile that shoots as flat as possible, and that is a balance of ballistic coefficient and velocity. So… what does a flat shooting load get us?

The Benefit of Velocity:

The perfect projectile would be a laser. It shoots in a perfect line neither affected by wind or gravity. A laser would have the same point of aim and point of impact at 100-200-300-1000-2000 yards. It would intersect a target at every distance with one zero. The closer we get a physical projectile to the flat shooting ideal hypothetical projectile the further the bullet will travel while still intersecting our target.

Since we don’t have laser rifles, we want to shoot bullets with the highest aerodynamic value launched at the highest velocity we can. This means we should shoot cartridges with a high ballistic coefficient from the longest barrel we can effectively use for our purpose. Let’s look at Mk 262 the 77 grain SMK for our first example. It has great terminal performance and fragmentation capability out of even shorter weapons. The picture below illustrates the advantage of velocity and trajectory from a rifle vs a SBR.

The longer our bullet remains inside the vertical axis of the target, the more forgiving our gun will be to shooter error. In the above example, I have to estimate that the 9 inch target is within 33 yards of its actual distance to get a hit with higher velocity, while with a carbine my estimate must be within 23 yards of accuracy for the 10.5 inch gun.

“My error has to be within 25 yards? I can do that” Yes, I guess you could depending on how much time and experience you have. Time vs shot performance is the key here. If our target presents itself only for a short moment of time, there will be precious little time to adjust dope or to calculate distance, and precious little time to set up the shot. Reticles with built-in bullet drop stadia are a quick solution, but the highest likelihood of intersecting the target is to choose a flat shooting projectile / barrel length combo that will keep the bullet flying for the longest period aloft in the space occupied by the target at X distance.

The shorter you go on barrel length, the lower the velocity, and this directly translates to more bullet drop. The lower velocity also directly relates to longer flight time to target. The longer the bullet is in the air, the longer the wind has to push it off target. There is precious little room for error as we extend the range with shorter and shorter weapons, *especially .300 blackout*. Again, I recognize that this is not what these weapons are designed for, and many shooters understand that, but there is always that *ONE GUY* who thinks his SBR can be a sniper rifle. “See! Haley shot something at 750 yards with his blackout!!11!! What can’t this round do?”. Well… let’s see how the guns and bullets fare compared to each other with another test. What test? MPBR.

MPBR is a method of setting up your gun to take maximum advantage of bullet trajectory vs the size of the target. In the above example, I used a 9 inch tall “headshot” model. Lets tighten that up to 8 inches which equates well with a hit in the vital zone of this silhouette. This means we will sight in so that our bullet rises no higher than 4 inches above our point of aim, and stops being the maximum as soon as it drops 4 inches below our point of aim. The goal here is to aim at consistent spot on the target (in this case, center of mass), and give our bullet the best chance of staying in that defined zone for the longest distance. Sound familiar?

MPBR: the 8 inch sweet spot on this IDPA silhouette is a great setup for sighting in a defensive rifle. Barrel length and bullet choice directly equate with how “long” your MPBR is. The longer distance our bullet travels while staying in the vital zone, the better since we don’t have to correct our aim.

So take that 8 inch vital zone and apply it to 10.5, 14.5, 16, and 20 inch barrels using several popular civilian / military loadings. What do you get? A chart. A chart that shows you how much distance a bullet will travel while staying inside our defined MPBR for defensive shooting.

Regardless of which projectile you choose, barrel length and velocity play a key role in how flat the trajectory is. The longer the MPBR, the further your target can be before you have to make corrections to elevation. The 16.5″ should read 16″ but the data was not affected.

With any setup, you want the flattest shooting projectile for your uses, and in making a choice before settling on a rifle, you *should* ask yourself how long can I go without sacrificing portability for my needs? Trajectory is directly related to your velocity and bullet construction. Whats interesting to see is just how flat M193 shoots: while it has a poor ballistic coefficient, it is by far the flattest shooting projectile for shooting at less than 400 yards with m855 a close second.

The chart also shows how barrel length imparts a longer MPBR regardless of ammo choice or which bullet you choose. More velocity means less deviation from your target via wind *and* drop regardless if you shoot 5.56 77 grain, 55 grain, or even .300 aac.

The less time the atmosphere has to influence the bullets path, the better. Let’s say you are dialed in on a 600 yard man-sized silhouette. There is a *mild* 5 mph wind. Take a look at the chart below. With each shortening of the barrel, more wind drift is introduced and you will be near 26 inches with the 10.5 inch barrel. Then there is .300 blackout…  39 ish inches of drift? It takes a longer time for .300BLK to reach the target and thus it’s more affected by wind.

Wind drift is kept in check with Mk 262, but with every step down in velocity, we combat more drift. The better the round fights the wind, the longer it will stay in the targets horizontal box. The .300 AAC blackout is supersonic and in no area did I substitute subsonic .300 AAC in any of these slides.

So while Travis Haley was able to throw rounds downrange at 750 yards on a windless day, we can see that it would take substantial hold overs or optic adjustment to get a consistent drop on a target with the blackout on a *mildly* windy day. It’s important to choose the right system for your shooting. If you really wanted to push your AR15 to intermediate ranges, 6.5 would be the best choice while still fitting into the AR15 magazine well. It is capable of shooting flatter than .308 and also has less wind drift than any of the discussed loadings.

It isn’t about the accuracy, we know mechanical accuracy in the SBR platform is just as good (if not better than) their rifle based counterparts… it’s about the amount of user error each kit allows, and how that plays into the sum of everything that goes into the shot. It’s about giving yourself the greatest chance to hit the target with the natural error that comes from being human. Don’t trust that little SBR to do everything you see on the internet. Keep it in its place, and keep it inside its performance envelope. Right tool for the right job.

However, even he admitted that the rig was at the edge of its performance envelope. His skill ousted the statistical gains on drop and drift other rigs may have had over him. For you and me, who can’t dedicate 20 years of our life to shooting every day, build a rig that gives you the advantages you need for your shooting environment in mind, and train with it as often as possible.

Build a dedicated rig for longer shots and you will find it much more forgiving of distance error and wind error. We aint perfect, and if things go south, our shot won’t be a white silhouette at 100 yard intervals.