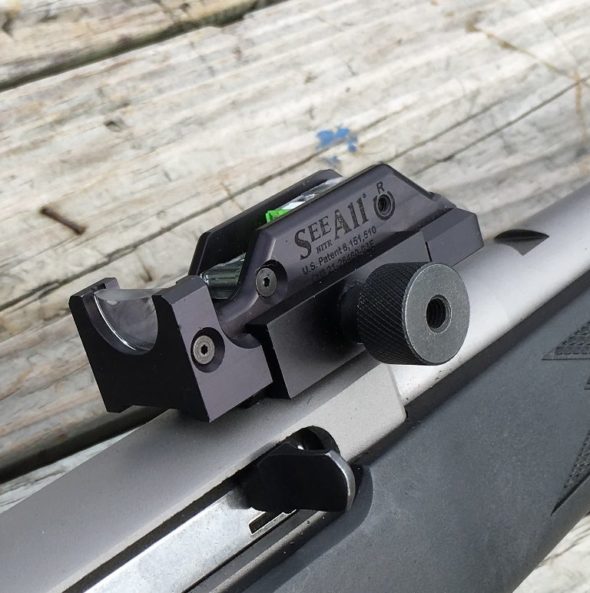 The See-All is a very small, robust, reflex-type optical sight that can be mounted to a weaver or picatinny rail.  It does not require batteries and is available with or without tritium for night viewing, with either a traditional cross-hair or a triangle-type reticle. As of this writing it is available from seeallopensight.com for $100-$200.  The model tested here is the tritium-triangle version. How does the See-All stack up v.s. a traditional Red Dot Sight? Let’s find out:

How the sight works is very curious.  I say it is a reflex-type optic because although it is used like a reflex sight, it does not have a glass “screen” upon which the reticle image is projected.  Instead it uses a very small magnifying lens to focus the user’s eye on a tiny neon green edge glow polycarbonate element with the reticle printed on it. This magnifying lens is cut in half so that the reticle is seen through the bottom half of the lens, and the target is seen over the top. The eye sees both the target and the reticle in the same plane and the sight is free from noticeable parallax.  It is classified as an “iron” sight because it does not use electronics nor magnify the target image. It is fully adjustable for elevation and windage and comes with small allen head wrench.

The Tritium at night was bright and clear

To say the sight is small is an understatement.  When compared to a mini red dot, the See-All is half the size.  Because of the open-top design, it can be much shorter in height than either an enclosed tube sight or a reflex sight with a heads-up screen. It measures approximately 2.7 “ long,  1 inch wide,  1 inch tall, and weighs 1.8 oz. The housing is made of durable 6160 aluminum, is free from any corners or edges that would snag, and the footprint is as small as it could possibly be.  It is so small that the knurled clamp knob for the mounting system seems out of place. It is 100% made in the USA

The See-All compared to a mini red dot

The first firearm I mounted the See-All to was a Ruger 10-22 with Tech-sights, using a generic mounting rail turned around to extend forward a bit over the barrel.  It mounted securely with the built in clamp and I sighted it in at a local indoor range.  The reticle was clear and visible with the indoor lighting and it functioned fine. Sight adjustments are done by turning a screw on top or on the side with the included wrench.  Turning the screw 1/16 of a turn corresponds to 1 inch at 100 yards, and there are no tactile adjustment clicks.  I did have a bit of trouble adjusting the windage until I realized that I was adjusting the assembly screw, not the windage screw.  Whoops.  I suggest a different sized screw head be used on the assembly screw so as not to confuse the two, but that mistake is mine. The triangle tip can be very precise and I could easily keep my groups within one inch at 25 yards.  I asked a few people around me to try it and all of them liked the sight and were amazed at how it worked.

Next I took the See-All 10-22 combo to an outdoor range and did some action shooting work using IPSC silhouette targets.  In the full daylight, the neon green reticle was superbly bright and showed up very well against the targets and surrounding brush.  It was very easy to hit center of mass by simply putting the triangle on the target and to make headshots by putting the tip of the triangle on the target zone.

looking over the top of the iron sights

However I sometimes had a challenging time finding the reticle when bringing the rifle up from a low ready hold.  If I placed my head a bit low on the stock, I could see the reticle clearly, but if I lifted my head too high, the reticle image would lift up past the top edge of the magnifying lens and disappear.  With a traditional red dot or even a reflex sight with a front screen, if the head is a bit too high… the dot or reticle is also high in the field of view but still visible. Since the See-All uses a “split screen” view, the reticle seen through the lens on bottom and the target seen over the lens on top, when the head is high enough to move the reticle past the midline of the lens, the reticle is simply gone.  Therefore head placement on the stock is very important.  A bit too low is okay, but too high doesn’t work.  I found the best way to adapt was to start low on the stock when mounting the rifle to my shoulder and then to raise my head gently until I acquired the triangle.

Next I tried the See-All as a close range backup sight on an AR-15 using a 45 degree offset mount.  This arrangement is utilized by rolling the rifle over counterclockwise from a standard hold to bring the backup sight into view.  This maintains a good cheekweld on the rifle as opposed to the backup sight mounted on top of the primary optic.  I bought some cheap generic 45 degree mounts off of Amazon to try. The See-All was very unobtrusive, tucked under the ACOG, and I could keep my head pressed down on the stock and roll the rifle over to see through the See-All.  In fact, it was a bit too low and I had to smash my face into the stock to use it. I sighted it in at the indoor range for 25 yards and then ran through the same outdoor target drills as I did with the 10-22.  This arrangement seemed to be a good match.

The eye relief of the ACOG required that I mount the See-All in a forward position, and I wanted to see how it would do with it mounted behind a traditional styled scope.  I played around with several different mounts and occasionally a riser to get the sight high enough to see without smashing my face yet not too high. An additional change I made was replacing the factory mounting bolt and obnoxiously large knob with a much smaller bolt and nut from the hardware store. This arrangement worked pretty well.

Small nuts are a benefit- really!

See-All tucked under the ocular bell of a traditional scope

I still had a bit of trouble needing to mash my face down on the stock and then come up a bit in order to find the reticle, so I mounted the See-All on top of a rifle scope to try it piggy-back style.  It was a natural move to come off the primary optic and raise my head to find the See-All sight with this arrangement.

Sight picture when mounted up top

I then took the rifle to a carbine match and paired it against another rifle with a mini red dot on a 45 degree mount to see which one I liked better.  Shooting fast on the move with targets less than 25 yards, I still had a hard time getting my head in the right position to see the See-All reticle.  Once I found it, I was fine, but finding it was sometimes frustrating.  And then I discovered a fatal flaw.  One of the stages required entering a structure and shooting through windows at targets outside.  Inside the structure was dim and outside was bright, and I could not find the See-All reticle at all.  There was not enough ambient light inside to see the sight against the bright background and not dark enough to use the tritium.  I shot the stage again using the other rifle with the 45 degree mini red dot and did not have any trouble at all. Shooting from a dim interior to a bright exterior is not in the See-All’s bag of tricks.  So although it was much smaller than the mini red dot, the red dot did the job the See-All could not do.

In summary, the See-All has a lot of things in its favor:  It’s very small and lightweight, it’s durable, it does not require batteries, and is a great match for people with poor eyesight.  It works very well in the daylight or in complete darkness with the tritium. The drawbacks are that it requires precise head placement to see the reticle and does not work well in dim but not dark environments, such as shooting from low light into a bright area.  I think it would work best on a 22 rifle, or in a hunting application on a muzzleloader or a shotgun, but I question its use on a defensive rifle due to the low light liability.  I plan to put it back on my 10-22.