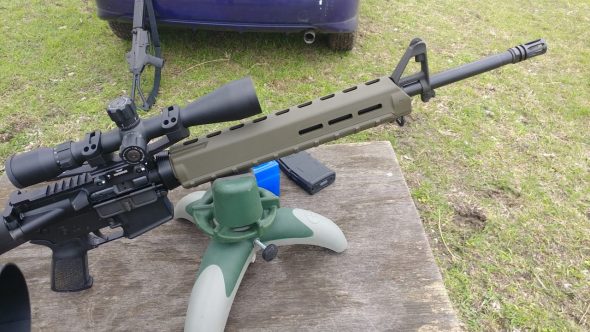 Today I have a mini post to share with you some light accuracy testing of the PSA 20 inch nitrided barrel assembly. Accuracy testing can be a chore, but this is more of a mini-assessment. The factory PSA upper is a flat top, nitrided, 20-inch rifle length system in 1/7 twist. The only change to the upper out of the box is a Magpul handguard. It is not free-floated. It is Gov’t profile. How accurate was it?

The two loads I brought with me are one factory, and one hand load. Each barrel is unique, so multiple loads will paint a better story, but my time at the range today was devoted to my DAEWOO with the PSA accuracy test a secondary consideration. Further testing will occur, as I want to do a full review of the PSA in the future. Let’s take a look at the loadings.

The 52-grain ELD match load I used today shot this group out of an 18 Inch Straight Jacket Barrel System.

My first load is the ELD 52 grain match bullet over 24 grains of trickled Varget and a CCI #4 primer. This load is exceptional and has shown itself capable of producing .78 moa ten-round groups out of the right gun (cough Straight Jacket cough). I use ten-round groups as they are statistically significant, and tell a much more truthful story of shooter, rifle, and load than 5 or 3 round groups. Let’s see how the 52 ELD match did.

In the PSA, the load was lackluster. Each gun likes different loadings, so what can I say, can’t win them all. I will need to experiment with hand-loads to see what the nitrided girl likes:

The super-accurate load didn’t jive well with the PSA. At 2.07 MOA for a hand load, that’s not too hot. However, each barrel is different, therefore this one was a wash. The barrel didn’t like it.

Next up was the Federal Gold Medal Match. This bullet is a 77 grain over the counter bullet which has a reputation for accuracy. It is always in-stock local to me at Academy and makes a convenient testing round. Let’s see what it did out of the PSA:

Really big improvement with this load. A non-free-floated budget barrel pulling a 1.5 MOA group is fantastic. If this rifle was free-floated, we could expect to shave 1/4 to 1/2  a minute depending on load, etc. In today’s AR15 market, smaller companies are getting steamrolled by Palmetto… you have to wonder why. It’s because they put out a excellent budget product. It may be possible that with a free float rail and more handloading, the humble PSA could in-fact, get sub-MOA. For a standard barrel, it is shooting very well.

In this corner, we have a COLT 1/7 twist HBAR. Free floated. Ready to RUMBLE. The PSA matched the accuracy of my Colt HBAR which has every advantage in its corner. It’s stiffer. It’s free-floated. It’s a big name brand… and the PSA just matched it punch for punch with FGMM. A basic. Cheap. Nitrided. Non-Free floated, budget barrel for the “poors.” The COLT did stomp over the PSA with the 52 ELD hand load coming in at 1.07 MOA. That’s the nature of such things though, I will have to work on hand loads for the PSA to see what she likes, but having a reliable budget rifle that shoots equivalent to higher-end gear… well, that no laughing matter.

Check out PSA’s 20 inch upper below: