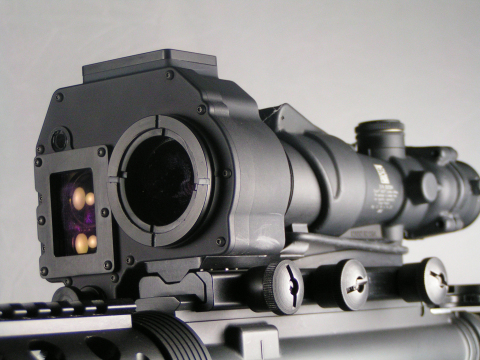 Back in 2014 I broke this technology after stumbling across slides on google images. I think I may have angered Trijicon though since I don’t think they wanted to share. Well, let that be a lesson to anyone running a server to prevent crawling of the site! Since then, I decided to do a little checking to see where this project ended up. Welp, here is a live unit!  Whats unique about the PATS system is that it is a pass through overlay, meaning if the system goes dead, your ACOG still functions just as it did and it looks past the overlay and downrange just like it did before. Sweet tech!

The PATS unit is a fully integrated fire control system that converts most fielded optical sights into smart, lethal targeting systems,” stated Michael Presz, Kopin’s Vice President of Government Programs and Special Projects. “Incorporating a state-of-the art Laser Range Finder, Ballistic Calculator and Overlay Display, our PATS unit increases the accuracy of shooters using most fixed or variable magnification weapon sights. The unit simply clips on in front of the existing weapon sight and provides a precision ballistic solution which is day/night readable. PATS allows the government to greatly improve the performance of its existing inventory of fielded weapon sights by reducing engagement times and improving the probability of hits at ranges out to 600 meters

While I wish we could get our hands on this device, sadly… it may just be relegated to the dustbin of cool toys we want but they wont sell us… Kopin needs a big army contract to pull this out of the coulda been pile. It looks like it was helped along with Bryan Litz ballistic expertise… Time will tell if this goes anywhere.