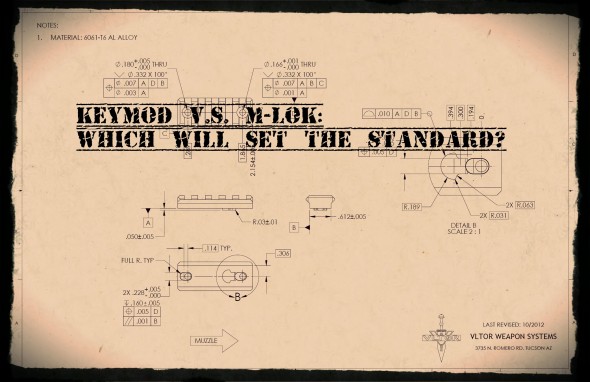 Feeling like Magpul’s M-Lok muddied the waters of the universal attachment market? Or perhaps you are cheering Magpul for challenging KeyMod? Regardless of where you stand, it will only benefit the consumer to have more options. But is their room for both?

In case you don’t know what I am talking about, here is some history: In 2012 Vltor Weapon Systems introduced an “open source” universal attachment system for accessories. The idea being to directly mount accessories to the hand-guard and the design is free for anyone to use.

Enter Magpul: At the 2014 NRA annual meeting, Magpul introduced a new “open source” accessory attachment system. Known as M-Lok, it is Magpuls attempt at industry wide standardization. Both systems have the same goal, but offer different solutions to the modular rail equation. KeyMod uses an attachment system with “keyholes” that allow accessories to slot in and then are tightened down with captured screws.

The KeyMod system utilizes a “keyhole” to index accessories and attach them directly to the rail.

Where as M-Lok uses a method to index accessories against rectangular cut-outs in the rail.

Both designs are attempts to consolidate the rail market to a new “modern” standard, and to cut the complexity of manufacturing rail systems with the picatinny rail. Which one will last and which will become a legacy system?

I don’t believe that this battle will be one where the technically better system prevails. This is going to be a pure cost and popularity battle. Magpul claims the M-Lok standard is cheaper and easier to manufacture. M-Lok is also capable of being used in plastic hand-guards; this will result in a massive production of products from high-end to dirt cheap Chinese import junk. M-Lok adoption will be quick and widespread especially with Magpul’s commitment to produce accessories for their rail.

This was an important aspect that Vltor missed when they introduced KeyMod; there were too little in the way of accessories to wow consumers.

Only recently have we seen any steam in KeyMod’s engine. Finally, new accessory designs are making their way to pre-production. Companies took a “wait and see” approach to KeyMod before committing to the standard, but now their attention and product development will be split between KeyMod and M-Lok. With Magpul leading the charge of M-Lok accessories, consumers and manufacturers will be swayed towards the M-Lok standard at a faster pace then KeyMod. Further cementing the deal is backwards compatibility with old MOE accessories. Any accessories purchased prior to M-Lok will function with an adapter plate. Touche Magpul.

So is KeyMod doomed?

No, we can expect continued KeyMod support for many years.   Multiple manufacturers have began to run with the KeyMod system and have invested substantial time and energy into supporting KM. We have a few big names that have released KeyMod systems: Noveske, Bravo Co, Vltor, and Knights Armament to name a few. These companies set the standard for building rifles which “set the standard” for a hard use weapon. I doubt these companies will slow support for KeyMod at the moment… and that is just what’s going to keep KeyMod alive. Eventually, I think the development of new KeyMod accessories will slow to a trickle…

Unless KeyMod moves into military procurement. That would be just the game changer KeyMod needs to sway civilian consumers back to KM. With a big military contract, new accessories will start to flow into the mix rapidly.

Technically, Which One is Superior?

First off, I doubt any consumer will push hard enough to test the limits of either the KM or M-Lok systems. Until we see them in use on a widespread basis, it will be hard to discuss durability or product failure. Consumers are unlikely to push either design to their failure point. Until we see widespread breakage of certain components on a regular basis, I will call a draw on durability.

I could be 100 percent wrong with my theory… But I see a strong possibility that Magpul has stacked the deck in their favor. They make affordable products and are a trend setting company in this industry. I think they will gain momentum quickly over KeyMod.

Disclaimer: I am not sponsored by Magpul in any way, shape, or form and the only product I currently own from Magpul are Pmags. I do have a KeyMod product on order.