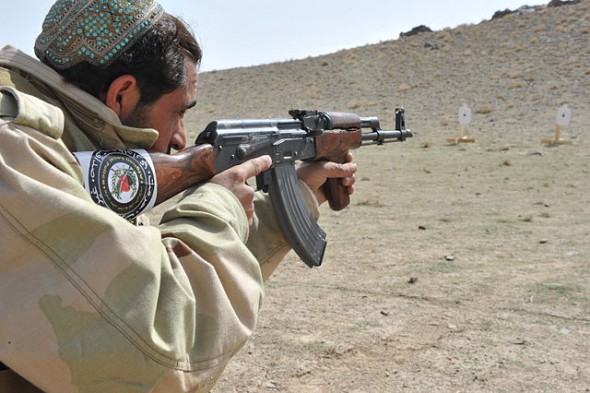 Seriously. I know it is cheap training ammo, but there are some serious issues with stockpiling it and making it your go to ammo. I have compiled a few links and evidence to support my claim that it is a terrible choice for your AR15.

Stockpiling it for the apocalypse is a super bad idea.

The quality is so poor that even under ideal conditions you are going to reducing your 1.5 MOA rifle to a 3-5 MOA weapon. If all you run through your AR15 is cheap Russian ammo, then you have eliminated some of the accuracy benefits of the AR15 platform.

Furthermore the typical bi-metal jacket these rounds often have is just a cheap way to save money at the cost of your barrel life. The steel jacket is harder than a copper jacket. It resists molding to the rifling like a copper jacket does and this extra friction (and heat) decimates your bore.

The steel case doesn’t fully seal the chamber and allows powder residue to flow out of the bore and into the chamber. This residue builds up (what is commonly mistaken as burnt lacquer) and will eventually precipitate a malfunction. This is even more true if you suddenly start shooting brass cased ammo again! The soft brass will seal itself against the chamber and get stuck on the carbon build up in the chamber.

Yes Russian ammo is cheap, but your AR15 is not. Even though the market is hitting bottom, I’m willing to bet your black rifle is one of the more expensive consumer products you own.

It was made to function well with a copper jacketed projectile in a brass case.

If all you shoot is Russian steel ammo… Then sell the AR and get an AK. Because that is what you have turned your AR into. Poor accuracy, poor terminal performance, and shortened barrel life.

Shooting “Bi-Metal” jacketed ammo is not the best choice. Not all Russian import ammo is junk as they have a wide variety of products, many without a bi-metal projectile, but do your research. It may save enough money to re-barrel your AR15, but do you really want to re-barrel your gun every 5000 rounds? Sounds like a pain in the butt to me.

So, if price drives your defensive ammo purchases, then you will likely enjoy the Kalashnikov platform more.