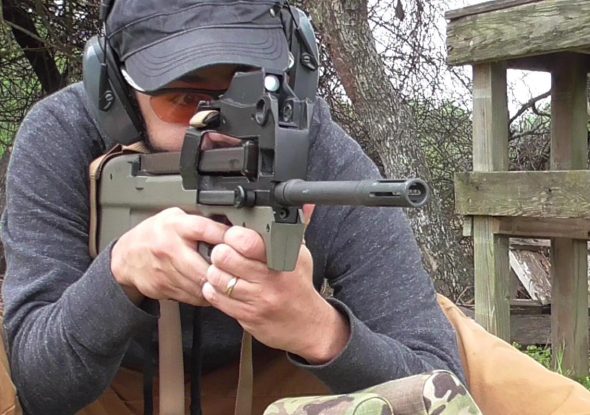 The P90 has a long storied history, and it’s famous for the innovative bullpup design. It’s still the reference for a high capacity, high-reliability small arm. The civvy PS90, however, is a polarizing firearm and it’s easy to get into deep arguments over the cartridge and platform. Some hate it, some love it. Is it worth your time and money in 2020? Let’s find out.

The PS90 is a compact little green spud. My FN came from the factory back when XBOX and Halo 2 were a big deal. The gun has aged well. It looks in place here in 2020 next to your flying car and the particle accelerator you use to light candles. The fit and finish is fair. The cast receiver has pit marks from the casting and the clamshell stock is nothing but soulless plastic and bolts. The paint flakes off on high points to reveal a battle-worn… dark cast aluminum.

The interior of the rifle features a bolt that rides on two steel rails with dual recoil springs. The bolt looks cleanly machined and the steel rails are nicely polished.

The trigger pack is another piece of soulless plastic. It’s comprised of a variety of movey bits and pinchy parts that somehow manage to fire the gun. Its complexity makes me feel as though the AR15s trigger group is 1+1=2 whereas the P90s trigger pack makes feel like Einstein is slapping me screaming about calculus in German. I wouldn’t dare question him and his secret knowledge.

The magazine is a hollow rectangle of plastic which sounds cheap when pinged, but apparently they are quite durable. The trigger is plastic. The safety is plastic. The optic (an old school ring site) is plastic. Sure there are some metal pins and such here and there, but this gun makes DuPont blush red. Plastic errywhere.

The PS90 performs well with FN factory ammo and is quite accurate. It’s more than enough accuracy to engage targets from 0-200 yards, and with a better optic, I feel I could have performed better during this test. Note that my zero is off a bit, and I neglected to bring the tool with me to adjust the optic. Since the group would tighten with magnification or a better optic, I am going to say this rifle is likely going to come in as a 2-3 MOA gun.

The dreaded plastic trigger is a hindrance to accuracy as well. It is nothing like an AR15 or anything familiar for that matter. It simply slides back forever until the shot breaks. It’s not going to enhance shooter accuracy, so it certainly can be a deficit to accurate shooting.

The controls are sensible and intuitive upfront. Rack the ambi charging handle, toggle the safety, and get to firing. The rear controls are comprised of the magazine latch. While ambidextrous, it requires a firm grip and practiced manipulation to remove. Needless to say, the magazine doesn’t drop free. It must be thrown out of the way. The AR15 is easier to reload, but practically it may be a wash as having 20 rounds more on tap gives the shooter more gas before needing to do a slow, cumbersome mag swap.

When running and gunning, I felt the optic was a severe limitation. It’s simply not bright even outdoors. It leaves much to be desired. However, despite it shooting a bit left (and me forgetting my adjustment tool) I made hits on steel from 0-100 yards. The gun flies with you when running and gunning. It feels like your holding a football that just moves with you. When you stop to fire, the gun snaps up and remains fairly steady. Everything was going well until I came to my shoot while moving section of the run and gun. I COULD NOT KEEP THE RETICLE STILL. It was dancing all over the target and I struggled to remain on target when moving. This was a curious development for me. How could a gun that shoots so well and points so good feel like I’m aiming while walking on marbles? Simple. Without more weight up front, the gun had nothing to dampen the muzzle movement. It moved with every step and reacted to my core.  I picked up my AR15 and did the same drill, and noted that the front sight on my A2 still danced on target but it appeared to me to be much more sedate. After I got my tempo I was able to bang steel while moving way better than I could with the P90. I believe it’s simply because the weight forward of the shooter’s hands dampens some of the movement of the front sight while shooting on the move. A very wild observation!

On last point on ergos and comfort: recoil. This gun vibrates on target. It simply recoils so little that it feels like cheating. Hammering out follow up shots is easy provided you can get freaky on the PS90’s trigger. That said there is no noise or concussion relative to a shorty AR. It’s pleasant to shoot and doesn’t need a compensator to stay on target.

The PS90 has never jammed for me while cleaned and lubed. I have had this rifle for years. It’s been in 30 degrees to 105-degree heat. The basic design is reliable and almost maintenance-free. The hammer pack is “self-lubricating” and the gun can probably survive and function fine with WD-40 as a weapons lube. There are no pistons, op rods, or anything that can really go wrong as it is a dirt-simple blowback gun.

That said, what’s a gun review without a bit of mud? Let me preface this test… in these conditions, all guns will fail. To gain a benefit from such a test means we must determine why a gun failed. Failure analysis will give us a glimpse into what components fail, and what components work well. I identified two major areas of failure on the PS90 1): The trigger fails to reset. The mud and gunk flowed through the rifle and immediately it began to suffer from trigger reset issues. The trigger had to be manually pulled forward for each shot. The analysis leads me to believe that sear return spring is simply not strong enough to push the sear, trigger bar, and trigger forward. Under normal operating conditions this isn’t a problem. With the extra friction in the trigger bar raceway and trigger itself, there isn’t enough oomph for the spring to reset the trigger group.

I field stripped the gun into its major components and then washed them out with a clean canteen of water. I attempted to pour water into all the operating areas and re-assembled. The trigger was sluggish, but the rifle began to operate again until I encountered failure point number 2): The gun ran well after the rinse until the magazine was at the last ten or so rounds. I was now getting hammer strikes but no bang. Removing the magazine revealed that they were unable to move down the ramp into the feed lips. This led me to believe that the extra grit caused magazine issues as the spring lost some tension as it expelled rounds until finally, it wasn’t able to overcome the friction of the final few rounds in the magazine.

I believe my two points, the magazine and trigger mechanism are the major issues the PS90 must overcome if faced with austere environments. Full-field strip and re-lube will get the rifle going again. Let’s re-iterate… that test will cause every gun to fail. It’s our job to examine the failure points and discuss them for our collective knowledge.

The FN PS90/P90 remains a unique, functional, and desirable firearm. It’s not a match gun, it’s not a deer rifle, it’s not a marksman’s rifle… It’s made to send a never-ending stream of 5.7 mm copper wasps at a target.

The high cost of entry is a concern being that this rifle runs $1400 dollars and ammo can be as close to 50 cents a round. So financially there are other solid choices that won’t break the bank. However, if you have the coin to drop on this weapon system it will serve you well as a self-defense weapon inside of 200 yards that you basically never have to reload. In urban settings, the gun shines. It is reliable under normal operating conditions.

The PS90 is a unique and fun firearm to shoot and has use as a maneuverable home defense weapon. Recognize that bullpup designs have their own pitfalls and make your decision based on the data presented.

If your interested in the PS90 please check it out at our site sponsor by clicking the link below!

Disclaimer: FN USA has no financial relationship with thenewrifleman.com and have had no contact with us regarding the review.