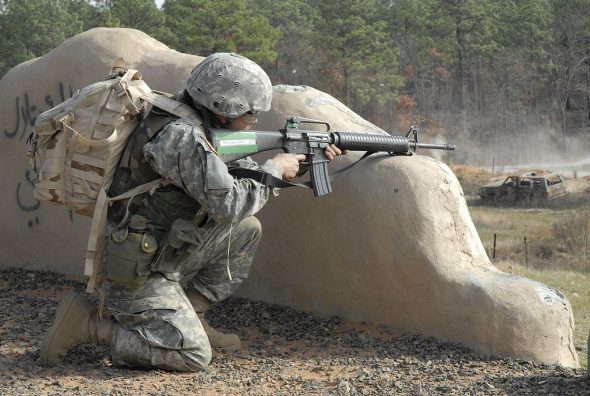 Cloning the M16A2 rifle isn’t hard, you just need to know where to look! Perhaps you want to build up a rifle like the one you carried back in the day, or perhaps you were inspired by the M16A2 you saw in Black Hawk Down… Regardless of the reason for your project, the M16A2 can be cloned fairly easily.

A picture is worth 1000 words. A movie with the man who led the development of the M16A2 is worth at least a million. One of my favorite videos on the M16A2 is shown below. Lt. Col. David A. Lutz was one of the drivers behind the M16A1 PIP program and oversaw many of the changes to the M16A1. Lt. Col. Lutz is still around gun forums and has been a blessing to our community. Thread’s like this one at AR15.com give us even more insight into the process that developed the features on the M16A2.

So if you are pumped and ready to build that clone now, then let’s get started. We will be building clones that are “functional” clones (the handling and feel of the M16A2) and “clone correct”  clones which will get you as close as possible to an issued M16A2. We can’t always find sources for old parts, so we will try to get as close as possible. Let’s begin.

It’s still possible to find carry handle rifles in stock on a few manufacturer’s websites, but unfortunately most of them are clones in look only. Many of these factory rifles are simply old stock with features and or components that no one wants. The Rock River Arms A2 rifle is a prime example. This rifle certainly looks like a M16A2 clone, but it is equipped with many incorrect features… and the one that particualy offends me is the HBAR barrel in 1/9 twist. If you just want the look, that should suit your needs, but if you want to clone the US M16A2 Service Rifle your going to need the proper barrel profile. While models such as the Rock River A2 certainly have the look of an M16A2, the HBAR barrel configuration is needlessly heavy, and the 1/9 twist limits you to lighter 50-60 grain loadings.

There is nothing wrong with these factory HBAR rifles as far as looks go, and indeed they can even be suitable for entry-level service rifle competition… but the real M16A2 is a lighter, better handling rifle. So if no one is cloning the M16A2 then what’s a boy (or girl) to do? Ya got to piece if together yourself.

So what makes a M16A2 clone a “correct” clone? A non-detachable carry handle with drum sights that adjust for 200-800 meters. A2 length stock with trap door. Gov’t profile barrel without F marked FSB and standard rifle feed ramp barrel extension. Button rifled 1/7 twidt. A2 hand-guards with a triangle hand-guard cap. It’s stupid simple, but no one really produces a factory correct model.

So do it yourself!

Let’s start with the upper first:

True clone enthusiasts will want to hunt down a FK marked A2 upper or a Colt M16A2 upper to make sure they get the same product line as the military, but these will have to be sourced individually. They will be quite expensive, rare, and harder to find. Shark Arms and Fidelis Firearms have some at the time of this writing 8/31/19.

There are several vendors who still supply A2 upper receivers in both stripped and assembled forms: Fulton Armory. JSE Surplus. Rock River Arms. Hunt around and you can find one either stripped or assembled. If you are choosing to build one from scratch, you’re a brave person. The A2 drum requires three hands, an old priest, and  young priest. If you don’t have any priests available on call, then use the Schuster Rear Sight Installation Tool. This little gem will help you compress the spring while allowing you to drive the roll pin through the upper. Follow my how to guide here.

Meet my A2 sight priest: The Schuster sight tool compresses the drum spring while letting me drive in the roll pin. Go in peace.

Once you have your upper pieced together, it’s time to find the correct barrel.  The correct barrel is a Gov’t profile, button rifled, chrome lined, non-f-marked FSB in 1/7 twist with an A2 flash hider and a standard rifle feed ramp barrel extension. There are a number of vendors selling barrels that are CLOSE, but not 100 percent clone correct. To get 100 percent correct, you need to hunt down Colt or FN barrels with the A2 front sight base.

True Clone Enthusiast: Getting authentic FN and Colt A2 barrels will be a difficult process. I do not have a source for these, and much like the upper you will need to go on the hunt. I have touched them. I owned one. They do exist.

For someone who wants to build a functional clone… There are several sources for A2 barrels, though none of the new barrels are 100% clone correct. The closest brand new barrel you are likely to find is the Windham Weaponry 20 inch 1/7 twist chrome lined barrel. These units actually feature the NON-F-Marked (correct) front sight base. They are also 1/7 twist, 4150 steel, chrome lined, and button rifled like the real deal! However, they do have M4 feed-ramps which is not clone correct. They retail now $215 for the sub assembly at Windham.

The A2 profile barrel in all its glory?

A note on M4 feed-ramps:  The rifle will shoot fine even if the upper does not have M4 feed-ramps. However, you can take a round file and cut your own feed-ramps without any issues. My A2 has run for years with hand filed ramps and has had zero issues to date.

M4 feedramps are not clone correct, but they will not negatively effect function if your A2 upper does not have feed-ramps cut.

If you need something a little cheaper for your clone, and don’t mind straying a bit further from mil-spec, you can grab a 20 inch nitrided barrel from JSE surplus. These barrels are the correct twist, profile, correct sight base, but are not chrome lined. Instead these barrels are black nitride treated (not mil-spec) and come with M4 feed ramps. For a functional clone you want to run for fun, this would be a good choice on a budget.

The barrel assembly should be finished off with a triangle hand-guard cap and some 20 inch single heat shield hand-guards. The best (and likely mil-spec) I have handled come from COLT or Windham Weaponry. Other hand-guards (especially $20 dollar sets) are often crooked with a big seam and they creak when you squeeze them. Yuck.

With your upper complete, it’s time to find the lower. Luckily this is very easy. Any modern, forged, mil-spec lower will do, and will be functionally correct if you equip it with an A2 grip and A2 stock… both of which can be found easily. Brownells, Windham, JSE, Palmetto State Armory, etc. all sell A2 stock sets. I have owned a number of A2 stock sets over the years, and they should feel “fuzzy” and not smooth. Smooth stocks tend to come from overseas, with the fuzzy correct stocks coming from the USA. PSA sells a stock set made in the USA. The rear reinforced area behind the takedown pin denotes a A2 lower receiver .

If you really want to go crazy, look for a COLT AR15A2 lower (expensive) or wait for a special run of M16A2 marked receivers from custom shops. These custom lowers are by far the easiest source for a clone hunter, as custom shops produce them in odd runs and give them “correct” (US GOV’T PROPERTY M16A2) markings. In case you managed to snag a GREY FN or COLT upper (lucky duck you) then you are going to need a matching lower. Some custom shops will run a grey lower so keep on the lookout. Sources for these marked lowers are Black Creek Precision, Nodak Spud, and, soon… Palmetto State Armory.

Nodak Spud will occasionally do runs of grey lowers as well as standard black lowers. This will help you match that FN receiver you purchased from Shark Arms!

So you have slapped your M16A2 clone together and you are happy with your gear… but are we done? There were a host of accessories sent out with the M16A2 over the years, and it would be a shame to miss them:

Slings, as issued, were the M16 Silent Sling, and the Nylon Web Sling. Either of those slings will be “period correct”. The Nylon web sling is the “rifleman’s” sling which can be used to get slung up for stable positional shooting. Many soldiers will remember this sling from boot camp and firing week. In addition to the issued slings, there are aftermarket slings which made their way into Iraq and Afghanistan during the war on terror. Since so many slings made it overseas, it would be hard to identify with two and three-point slings were personally purchased, and which ones were purchased by the military.

The M203 Grenade Launcher. You want a clone? Brownell’s has got you covered. Yes, even the M16A2 with M203 is available for a clone build. Check out Brownell’s m203 components here. One caveat… it is a 37mm flare launcher. So it has the look, function, and authenticity of a contracted M203 but without the Destructive Device ability. If you want to step up your clone game, that should do it just fine though.

Aimpoint gooseneck mount with CompM4s is yet another red dot seen on the M16A2. Also pictured is the Cotton Web Sling with J buckle, and to the rear of the first rifleman a M16A2 equipped with a KAC M5 RAS and aim-point placed in a very odd location.

The M16A2 was often supplied to rear echelon troops. In various photos over the years, we can see the M16A2 sporting some unique accessories. One of the more common is the M68 CCO with carry handle adapter. To clone this setup, you will need a Aimpoint M68 CCO or a Aimpoint COMP M4 and a Aimpoint carry handle mount.

The best source for the mount is Ebay, and search for Aimpoint Carry Handle… many listings will appear for the mount which retails for about $12 dollars at the time of this writing. As for the Aimpoint, many shops carry what you need.

The carry handle adapter comes in two versions, one as pictured in the above slide, and the other came equipped with a D clamp mechanism to help reduce the chance of the mounting screw loosening under vibration.

Prior to writing this section, I had my personal M16A2 clone build at the range. It was launching 75 grain pills with 24 grains of Varget. It was hitting steel from prone, sitting, standing, and benched. Focus on the front sight, crystal clear… pull the trigger to the rear. Fire. Round after round of pure joy, and round after round of no-nonsense, reliable operation. No buffer tuning, no spring tuning, no adjustable gas blocks, no free float rail. Just iron. With such a mild recoil impulse, sweet shooting characteristics, the M16A2 should be in every safe accross the USA. It is the final iteration of the rifleman’s weapon prior to the modern optic era … it’s easy to see why the M16A2 will be forever be an indispensable part of the black rifle’s history.

If you have a source for parts and A2 related gear, comment down below to help others find what they are looking for… after you get yours of course!

← Should I Lapp My Ar15 Upper Receiver?
Starting From Scratch: A Budget Load Out →
Scroll Up