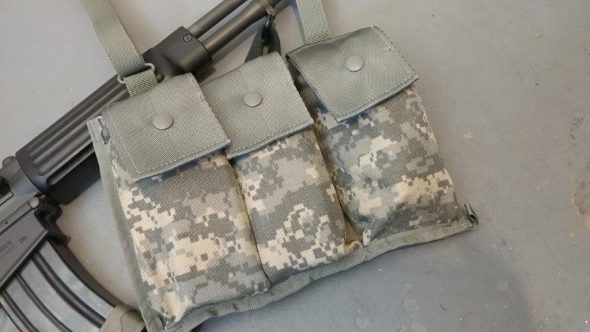 So that brings me to this short series: I have put together a few rigs on a budget and the very first one I am going to show you is about as cheap as you can possibly go on the scale. For the extreme budget minded, or for the newbies who want the basics… this series is here to get you going and to help you build up your kit from the (budgetary) ground up. This assumes you already have a basic rifle. I WOULD HOPE SO. So let’s get started!

Have Rifle, What Next?

So after you buy your gun, you need to be thinking mags, ammo, training, first aid. Get decent magazines. Get ammo. Get training. Get some first aid. Having a rifle and knowing how to use it is what separates you from the average recreational gun owner. Even getting some self directed training is better than none at all. There are some great books and resources online with self directed exercises and drills. To do many of these drills or to participate in training, we need a way to carry the magazines, ammo, and first aid. Can we do this without buying China-Com web gear? Yes we can. THE SANCTIONS JUST GOT TEN FEET HIGHER!

It turns out we can get pretty damn cheap and still be made in ‘Murica.

The MOLLE II Bandoleer Ammo Pouch, 6 magazine, NSN8465-01-524-7309 is a wonder of American made budget awesomeness. This thing costs around $6 bucks on Amazon with *free* shipping. This is a basic, bare bones, mag pouch with a built in carry strap. It is better made than anything from China. It feels robust, and looks like it will outlast cockroaches. This pouch will form the basis of my first article:

Amazon, you temptress you.

There isn’t much to this piece of gear. It is simply a 6 magazine pouch which holds two magazines per pouch. It has a carry strap for over the shoulder or purse carry. The fact that it holds two magazines per pouch is key. The depth of each pouch allows you to carry other supplies in lieu of 2 magazines. The nylon covers are seat-belt quality and snap over a high quality button.

I chose to outfit this bandoleer with four magazines and a basic first aid kit. With this setup, you will have 150 rounds on tap (assuming loaded rifle) with a TQ for any limb injuries that could occur. The kit is basic, but by simply bringing this to the range with you, you are likely more prepared than 99% of gun owners. That’s kinda sad, but it’s reality.

The Essentials and Nothing But.

Total cost of this setup: $95 dollars. The magazines are obviously the most expensive component. If you already have the mags, your set back is around $48 bucks for pouch and a basic blowout kit.

The biggest drawback with this setup is that it doesn’t hold PMAGS. They just don’t fit. USGI mags it is and it must be. The next drawback is that bandoleers like to flop around. I worked with the bandoleer concept many moons ago at practical rifle competitions. The downsides of the bandoleer were made apparent. When you go prone, it swings down in front of you and then you are potentially laying on it. When you run, it can bounce around. It can be a pain in the neck… but it’s far better than nothing, especially only costing $6 bucks.

But wait… QUE ES ESO? The bottom corners of the pouch are loops which can accept clips or even paracord. Yes, it can become a chest rig, albeit a bit uncomfortable around the neck.

Anything can be a chest rig, if your brave enough.

The components of the bandoleer can move to an upgrade in the future. Just dump the mags and first aid out and put them in something better. Sure, save for good equipment as your budget allows, but something this simple can be in every beginners basic kit and it affords you the ability to run in competitions, to take classes, and to have the basics of self defense at home ready in a minute’s notice. Load some wolf in the magazine, save your pennies for that pie in the sky instagram kit, but until then you have basically what you need.

Can’t get much cheaper than the USGI bandoleer. Make us of it however. Cheap essentials. Christmas gifts. Bandoleer and first aid for every rifle in the house. Gift for your shooting buddy. I will tell you what. If you are just starting out, get the rifle, the ammo, the mags, and this kit. Show up to a local (reputable) class and learn to run that gun. So long as you show up with a zero’d rifle and an attitude of learning, your going to get respect in spite of your PSA kit, wolf ammo, and $5 dollar magazine purse. First time I showed up at a match, I felt like a dweeb next to some of those kits, but I learned much from Freddie’s stages in spite of my budget.

Next episode of this series will be a step up in budget: The ACU Fighting Load Carrier.

← How to Clone the M16A2 Rifle
Reloading: Should I crimp? →
Scroll Up