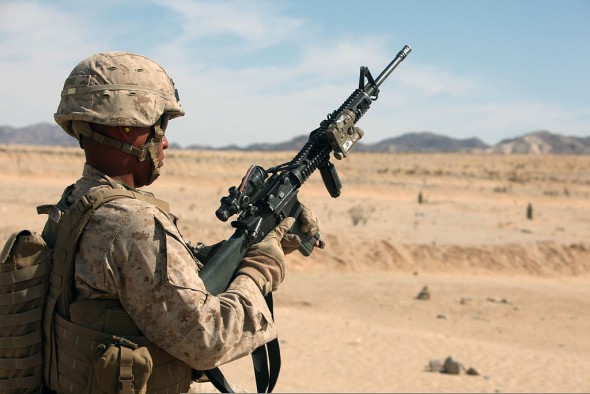 Several military units still run the 20 inch rifle platform in “modern” configurations. I would like to take a look at the three most well known systems and analyze the setup. Please consider any criticism of any setup just observational from a weapon standpoint. I respect that different units and soldiers have to work with what they are given. That said, I think anyone running a 20 inch rifle would do well to look at military’s running a rifle setup as an inspiration for their build. I would recommend against “cloning” a build as we can build rifles with superior components than what the military equips the soldiers with. Let’s get started:

The Marines have one hell of a rifle. Note how the marine is holding the toe of the stock against, what appears to be, his deltoid / bicep. The rifle is being used to scan the area with the ACOG in the photo, but many shooters use this hold to bring the optic up to the eye without shifting the head around. I can observe two issues with the photo and gear. 1) The A2 stock is too long to use with armor and 2) the ACOG’s short eye relief does not permit a back up iron sight. This goes hand in hand with the stock being too long.

The non rubber but-pad of the A2 stock likes to slide off the side of nylon / armor. The pocket between the pectoral muscle and the deltoid is eliminated when using soft armor. With the short eye relief of the 4x ACOG and a non adjustable stock, the Marines are constantly holding the rifle on the deltoid and must face the target at a 45 degree angle. This Marine is a good example of this phenomena.

You cannot use the A2 stock with armor very well. It slides off to the side and it won’t stay put. The M16A4 is equipped with a KAC M5 RAS which is a non free-floating rail system. I have handled a rifle equipped with an A2 stock, M5 RAS, and detachable carry handle. The rifle is heavy. The KAC M5 RAS is outdated and outclassed by other rails on the market. The ACOG on top only adds more weight to the M16A4.

If you anticipate setting up a rifle for SHTF a clone of the M16A4 would be hard to recommend. The A2 stock is too long and the KAC M5 Ras has been supplanted by lighter, more versatile rail systems. The overall profile is long and heavier than it should (or could) be. One of the great choices here the Marines made is the ACOG. Finally owning one myself, I can see what all the fuss is about. My wife never shot past 25 yards before in her life. I let her have my rifle with the ACOG and she was pulling off hits at 200 yard “headshot” sized steel plates after telling her where to put the chevron. When a piece of gear can make a novice into a 200 yard “head shot” capable shooter… wow.

Overall the M16A4 is a wonderful piece of equipment to look at. If you don’t own body armor the A2 stock and ACOG could probably work for you pretty well. If you want to build a fighting rifle, look at the M16A4 as inspiration and not as a blueprint. For a civilian an M16A4 clone can be overkill as a practical rifle.

EDIT: Shawn over at www.looserounds.com pointed out that the Marines now equip ACOG’s with a new mounting system that allows them more flexibility for eye relief . It appears to be the R-Com E mount sold by GDI.

The Canadian C7A2 is a very cool rifle. It features a carbine tele-stock with an H2 buffer, an Elcan C79 optical gun-sight, and a clamp on “triad” rail system. Of immediate note is that the Canadian soldier can shoot the rifle squared up with the target and the stock is actually on top of his armor where the pocket would be. He can shoot squared up to the target where the Marines have to adapt to a 45 degree stance with the M16A4. A telescoping stock is a great addition to a 20 inch rifle, but depending on how you equip your weapon is can feel front heavy.  The TRIAD rail and whatever gizmos one would attach would further compound the front weight.

The Canadians equipped their rifle with the C79 optical gun-sight. The C79 is a quality, though outdated, piece of equipment. As comparison, the ACOG found on the Marine’s rifle is half the weight of the C79 and has internal adjustments vs the Elcan’s external adjustments. The Elcan’s adjustment system is both heavy and exposed to the environment. The C79 was my first experience with a quality optic. I purchased one off the EE in the early 2000’s and it was great. Big eyebox, tritium post, range adjustable turret… Now that I have the ACOG I can say Trijicon’s product is vastly superior in design.  The Elcan C79 is simply outclassed and outdated. If you find one cheap and can’t bring yourself to drop coin on an ACOG, I would say get one. The glass is quality. The design is outdated.

The fore-grip mounted to the plastic hand-guards is a great lever for cracking the hand-guards. The plastic with heat shield isn’t the thickest or most robust platform for a foreword grip. It is hard to recommend doing this unless you have a Magpul MOE which is both thicker and more robust than stock hand-guards. The TRIAD rail is a very KISS idea but i would have some concerns about mounting gear that far down the barrel. I wonder how the point of impact shifts when adding or subtracting accessories so far out on the barrel of the weapon?

Overall the C7A2 heads in the right direction with the tele-stock and simple layout. I see very little need for the Triad’s extra rails as I, at most, would mount a light to my rifle. I am not in the military and I don’t have lasers and other night vision goodies… yet. The Elcan is good, but having owned both the Elcan C79 and the Ta31 ACOG… America got the glass right on the money.  If you want a TRIAD rail, Bravo Co. sells an American made version. Click Here.

They have a Command Arms telescoping stock, an Aimpoint CompM4, and a Aimpoint magnifier. Aside from the monolithic carbine upper receiver and bolt on extender it is still a vanilla 20 inch rifle platform.

Again the tele-stock is a good addition. The Aimpoint COMPM4 is a solid RDS. The Aimpoint magnifier adds versatility to the system along with the extra weight, but at least it can be fully detached from the rifle when not in use. I would love to get my hands on a IUR upper receiver and the extended rail provided it wasn’t ridiculously heavier than other options now on the market.

The situations we are likely to encounter in civilian life where we would actually need to grab our rifle could be handled just as well as a carbine in a variety of scenarios. My appreciation for the 20 inch platform is the velocity and excellent shooting characteristics of the weapon. It is smooth, and very reliable. The longer gas system uses less pressure to push the bolt into the receiver extension and ergo less stress is placed on the bolt as it cams out of the barrel extension. The pressure of the cartridge pressing against the chamber walls is also lessened considerably compared to carbine platforms and the bolt can extract the spent shell easily.

Ultimately most platforms be it carbine or rifle can be run reliably for anything a civilian shooter can dish out. I prefer the 20 for its positive shooting characteristics. The overall length is not a concern in my shooting. Here is a great video from Andrew Tuohy at the Vuurwappen Blog. If you haven’t visited Vuurwappen I would suggest spending some time there. Of  particular note is the high-speed video and his study on bolt carrier velocity and what makes an AR15 reliable.

Note: The images above are, to the best of my knowledge, public domain. If anyone deserves credit for any picture referenced please email me at [email protected] so I can credit the work.

← This Weeks Post Hosted at www.LooseRounds.com
Running a Rifle in a Carbine World →
Scroll Up