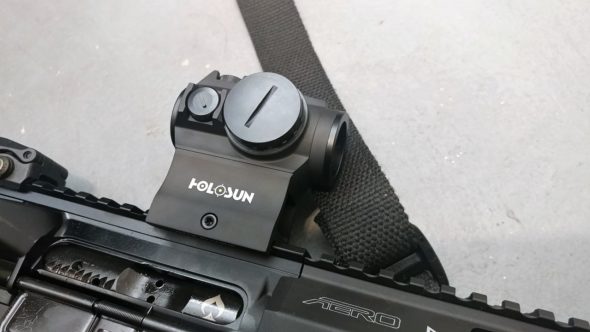 A “gold dot” sight? Yes please? New concepts are met with hairy eyes suspicion in the gun world.  There is nothing worse than beta-testing a new gizmo, and having your hard-earned money go to waste because, “No Sir. I don’t Like it.” Last time I checked, no one asked for a “Gold Dot” sight… Green was the new hotness working its way into various dot sights, and along comes HoloSun with a left field submission. Does it put red and green dots out to pasture?

The HE403R-GD is one of the many models available from HoloSun. As a first time owner, first impressions of the HoloSun are positive. The gold dot sight is a Aimpoint Micro esque clone with a rotary dial switch, recessed adjustment knobs, and includes a lower 1/3 and low-rise mount. The supplied mount has a steel foot clamp, and is tightened by an included hex key. The sight operates on a standard 2032 battery. It features two NVG settings, and 10 daytime settings. At setting 6, it sports 100k hours of battery life. Price? Around $180.

Build quality feels solid. The anodizing is a smooth black and construction appears clean. Glass is crystal clear with no obvious tint. The front lens has a slightly golden tint instead of the usual red tint. The emitter is located between 5, and 6 o’clock and is overall un-obtrusive.

The adjustment turrets are sealed with a rubber gasket and once removed, the caps themselves are used to adjust windage and elevation. Clicks are positive and the turrets seem to be well made. The mechanical switch clicks from setting to setting with a satisfying clunk. Overall build quality is excellent, and no alarms are being raised in my head.

At first glance, the dot appears golden-ish kinda maybe sort of. Depending on background and ambient light, the dot can look bright neon yellow to a mostly neon yellow with a touch of nuclear  green. In the video, the camera makes it look more green than it is, keep in mind to the human eye the amber element is more obvious. Brightness is not an issue; setting 12 it gives off a crisp nuclear glow in daytime, full bright environments.

The dot required excessive windage adjustment to zero out of the box. This possibly means that it was not factory zero’d at the middle of its adjustment range, OR that the mount was canted, OR that my new build was shooting way off. I did get it zero’d at 25 yards eventually, and I did not have any issues past that. I installed irons after zeroing the gold dot, and found them to be close to a neutral setting as far as windage and elevation. Perhaps the factory mount is slightly off-center? Unkown at this time. Aside from that issue, the dot functioned as deigned. Outdoors, the dot was easy to spot, and was bright enough to prevent washout on any target, especially at the higher settings.

Indoors in low light, I found the dot needed to be run at around setting 9 or 10. Setting 12 resulted in window bloom, and setting 3 through 8 could be washed out by a weapon light at close ranges. Moving back to across the room distances, the hotspot of my WML diffused enough to make the lower settings visible, but not enough to be comfy. I would say that my favorite setting so far is 9 for all around no fiddle indoors, outdoors, day time, night-time, low light, weapon light use. If I am purely outside in the daytime, I crank it to 11 or 12. Since setting 6 is nearly useless in bright light or with a weapon light, I do not consider it to have 100k hours of battery life if left always on at a usable level for self-defense.

During wet weather testing, the dot exhibited no evidence of water infiltration. I shot 180 rounds in steady rain, and let me tell you that it was very difficult to obtain good target visuals through glasses, and then through the gold dot. Having three pains of glass between you and the target… all beaded with water, really made it a challenge to hit steel. This is no fault of the Holosun, but just an observation for a glasses wearer.

After a few magazines, I threw the rifle and Holosun into the water and pulled it back to myself via the sling. No water infiltration occurred. I then continued to shoot then for a few more magazines until I saw lightning in the distance.

A few weeks later, I conducted basic shoulder level drop testing to evaluate the optics zero retention. After three drops onto dry soil, I observed no major issues from a functional standpoint. Zero was retained and the range session was wrapped up without issue. By this time, I had changed the mount to a Daniel Defense mount, and I do not recall having difficulty re-zeroing so perhaps the sight left the factory without being placed at a neutral zero. Regardless, once I did get it zero’ed I had no further concerns.

As of this writing, the optic has been on four months straight at setting 8. The dot remains bright and easy to pick up.

The Holosun HE403R-GD is a robust optic which will satisfy the needs of shooters with a mid-level budget. At $180, I feel happy with the purchase, and there are no concerns from me about its performance as a civilian shooter. I would hope that Holosun is setting the optic to neutral windage and elevation from the factory, but perhaps I got a optic finished on Friday afternoon. Other than the excessive dialing to zero the optic out of the box, the Holosun is impressive for the price. Changing the mount to a Daniel Defense fixed mount gave me more confidence than the factory mount, but I met no issues with the basic mount and I am happy it is included.

The Gold Dot concept is just as valid as red, or green dots… I appreciated the dot outdoors as it was bright and obvious against foliage. It may be weaker against white backdrops and bright weapon lights, but I was unable to wash it out until danger close distances to the target. Like any reticle/color choice, it has its ups and downs.

I give this optic a recommendation for shooters looking for a solid red dot sight. If you want to pick one up for yourself, check it out at my sponsor Brownells.com

Disclaimer: this optic was purchased with my own cash money. I have not had any contact with any Holosun personnel or media managers, and was supplied with no financial or product support for my review.