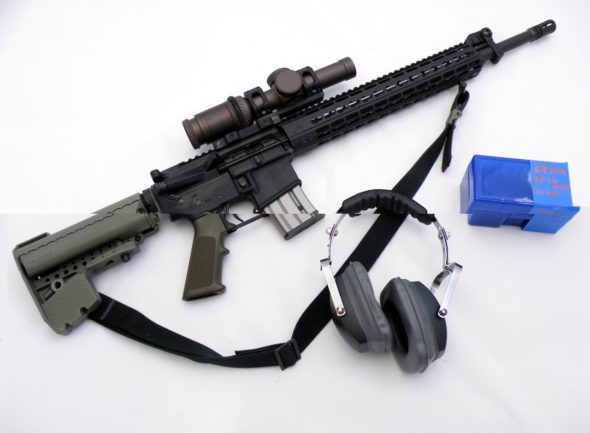 Its been 12 years since I let the first shot ring out of my used Bushmaster AR15. Since that day, I have been a card-carrying member of the “afflicted”: black rifle disease. I have studied the platform nearly every day for the past 12 years. I have seen the platform evolve in many ways. The rifle I use today is the result of my study and experience building AR15s. The hallmark of the AR15 is the versatility it can offer the shooter, and that’s what I wanted to create. A rifle that does it all.

There are many ways to configure a general purpose rifle. Many would copy the military style builds, but the military hasn’t had an “up to date” rifle since the introduction of the lightweight M16 in Vietnam. Since then, the military has introduced many changes in the platform that have *not* given the soldier a basic, good “all around” rifle. Currently with the M4A1 we have a compact carbine that can arguably called yesterday’s news as far as AR15 components go. On the other end of the spectrum, though the marines are moving on to the M4 platform as well… the M16A4 is also not the best use of component selection.

The inflexibility of military procurement seems to be the biggest issue. Politics also seem to play a role in what our soldiers are given. That said, the M4 and M16A4 are just not using the most modern components that civilian shooters have used for years. The M4 would benefit from a longer rail system, and “in theory” a mid-length gas system for more efficient operation… but then the bayonet wouldn’t work. Doh. Well, would a 16 inch barrel hurt?

The M16A4 could benefit from a telescoping stock, a free float barrel, and a few inches off the barrel length. Having seen the actual military power-point slides of the M16A4 PIP (which I cannot share, sorry) the program was a fantastic upgrade to the existing M16A4: It introduced a free float rail, removed the front sight tower, added a 16 inch barrel, and introduced a telescoping stock to the M16 platform.

M16A4 PIP mock up: 16 inch barrel with mid-length gas system, Daniel Defense rail, compensator, telescoping stock… overall it looks very similar to a off the shelf civilian rifle. This is one version of two PIP rifles.

The M16A4 PIP was a fantastic update to the M16 that may never see the light of day. The program produced a modern iteration of the M16/AR15 weapon systems utilizing components that civilians have used for years. It features slightly improved ballistics over the M4, a softer shooting mid-length gas system, a free float barrel which would benefit both platforms, and keeps the telescoping stock. It’s a meld between the M16A4 pole-arm and the M4 carbine with improvements on both.

Of course the military scrapped the program.

So when I set about building my rifle, I took the overall design philosophy from a blending of military and civilian ideals. Who are the best civilian shooters and what are they using to win competitions? How can I turn the race gun concept they use into a durable, and capable modern weapon system? I believe I melded the best features of the AR15 from the civilian side and military side of the coin. A race gun that’s a tough, fighting rifle. General Purpose as Hell and a Rifleman’s rifle. After running this gun for almost a year now, I will be modeling all future builds off the following design philosophy:

So what makes my rifle?

This product offers the shooter a “match grade” chrome lined, externally phosphated barrel assembly in a tapered profile. Sticking with tradition, I chose a chrome lined barrel for barrel life longevity and retention of accuracy. The chrome lining should help prevent throat erosion for many more rounds than a stainless barrel, thus preserving some of the match grade accuracy that went into the creation of this product. The thick-at-the-rear profile with the gradual taper helps manage heat near the chamber and manage weight towards the muzzle. So far the Criterion has worked as advertised, and for a balls to the wall rifle that can do anything, the CBI barrel is a good choice.

Going 18 inches allows me versatility with my loadings. I believe in matching a cartridge with a barrel length that offers efficient use of the powder. Efficient powder burn gets me more bang for my buck if you will. If I spend all that time re-loading bullets… why do I want to waste some of the money in a fireball out of a SBR? The efficiency of 18 inch barrels allows me to extract all the velocity I can out of my reloads, and that results in less wind drift and a flatter trajectory.

A rifle built for versatility would benefit most from a 16-20 inch barrel when chambered in 5.56.

The AP M4E1 upper receiver was another specific part I chose for the build due to its qualities. The AP M4E1 has a direct bolt on rail assembly that has a large amount of contact area with the rail and bolts into place with 8 hex screws. This large area of interface between the rail and the receiver resulted in an extremely tight fit between the rail and upper. When installed, I believe the stiffness of the rail is only bested by monolithic systems. Being that it’s user serviceable and can be replaced if damaged, the rail suited my needs for a modern rifle while not breaking too far with conventional AR15 design. I don’t need battle worn markings or upper receivers in the shape of a dragon. Not my style. I need something modern and I see the M4E1 as an awesome upgrade over traditional receivers.

After studying the M4E1, I struck up a conversation with Aero Precision about the platform. I was convinced and ordered it. Expectations were exceeded.

The Razor HD II… let’s see. A modern rifle should have optics. Master the irons, and move on. Optics allow you to realize the full potential of the rifle and projectile. Your naked eye cannot see distant targets very well, it sure as heck cannot identify them (friend or foe?), and they don’t help you much in the dark. Optics help with all that. Choosing the razor was a painstaking ordeal. It was hard to find that optic that was just right, but then I realized the HD could accomplish all my goals. From point-blank to 600 yards, the HD has had me covered. A flexible BDC, 1/2 minute adjustments on the windage and elevation knobs, and daylight bright illumination. It’s a good choice (among many) for a general purpose build.

The BDC is good for my two loadings: M193 and now my 75 grain Hornady loading. To re-zero between them, I just need two clicks of adjustment and then I put the caps back on. I can use the BDC… or I can dial up my dope on the turrets. I have a bright red dot at 1x and a mid-range bullet lobber at 6x. That’s versatility.

The front sight is mounted to the barrel instead of the free float rail. It is important to keep the front sight off the FF rail if you are going to shoot with sling tension. Rails can flex under the strain of sling tension and this will move the front sight leading to missed shots. Keeping the sight on the barrel is a better choice for a backup sight. I liked the hood on the PRI, so I went with that. Keeping the sun off the sights will lead to a consistent sight picture without glint on the BUIS.

PRI clamp on: I can also swap barrels pretty easily if the CBI barrel ever wears out.

The MBUS Pro has an important feature in a rear sight: a large eye cup. Having a scalloped eye cup is a great thing as the more light you occlude from the eye, the larger the pupil dilation of the shooter. The larger the pupil dilation of the eye, the *MORE* parallax free the iron sights become when using the small peep. Some of you might be asking where on earth did I learn that. Here you go.

The rear sight is important, and Magpul put some thought into the MBUS pro.

The lower is nothing special save for the A5 system. I chose a VLTOR A5 assembly to ensure parts commonality between my rifles, namely the buffer spring. The extra weight of the rifle buffer adds to the reliability of the rifle. Next upgrade will be a better trigger. The rifle also features the SAP sling as a modern answer to the GI web sling and ancient leather Turner sling.

Vltor A5 stock on my rifle with a SAP sling. The Short Action Precision Sling is a modern constricting cuff type sling that offers a method for two point carry and quick slinging up.

Build what you like. This is a hobby after all… that under certain circumstances becomes *not* a hobby, but a general purpose rifle wouldn’t be a bad thing in your inventory. Match the ballistic properties of the bullet to the barrel to ensure optimal ballistic performance. Balance the standards of quality that the military uses with the updates and modern equipment afforded to us in the civilian marketplace. Finally balance that with your needs as a civilian, law enforcement officer, etc.

Build a rifle that compliments the projectile. I don’t and wont ever own a SBR in 5.56 less than 14.5 inches (with pinned flash hider). At some point you have to ask, why am I wasting all that beautiful fireball juice outside the barrel? Why compromise the ballistics of the 5.56 over a few inches of barrel? More velocity never hurts. Better penetration, flatter trajectory, less wind drift, and less concussion are some of the benefits of keeping it > 16 inches.

The Sig brace is one of the worst products to hit the AR15 community in recent memory, but its “cool” to have what we couldn’t have before. Sure. As a side effect, we now have tons of new shooters with a specialized, short-barreled AR15 who will likely never truly understand how to shoot that rifle or why shorty ballistics are harmful to accurate riflery. It’s a dying and lost art. The knowledge of what, why, and when you should choose certain components is being replaced by what’s cool, or by marketing hype over components and junk that just don’t matter.

Do your part to fight back. Discuss why efficiency with the 5.56 is important. Educate people on WHY peep sights are more advanced than they once thought. Help people at the range understand the benefits of a modern shooting sling. Tell them why, at some point, we may need something more than a “home defense rifle” with a sig brace and 10 inch barrel.

If SHTF ever erupted, and I got to pick from a handful of rifle owners… I will pick the dude who is rocking a weapon that has a patina from lots of use, and is equipped with a high-end optic, and has some match ammo, and rolls up in a Chevy Geo. That tells me that he *uses* his rifle, he values it enough to invest his hard-earned time and money into the rifle, and that he understands why ammo selection is important.

That guy will likely be a Modern Rifleman.

← A Look at Trijicon’s New MRO Red Dot Sight
How To Record Bullets In Flight @ LooseRounds.com →
Scroll Up