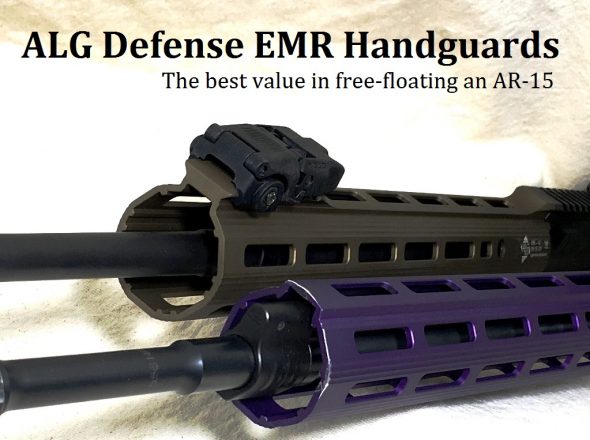 A while back I wrote an article exploring if a free-floated rifle barrel was necessary for a combat rifle and the answer was generally no.  I’m still convinced of that, BUT, what if you want to wring out the most accuracy from your barrel, or you want the options of additional mounting points for accessories? If the answer to free-float is yes, what free-float handguard should you get?  I’ve tried many of them and I have settled on the ALG EMR series.  The top three reasons I chose ALG are the handguard mounting method, the size and ergonomic design of the handguard, and the price. Not only are they the best value for the money, I think they have the best combination of features for any money.  All of the ALG handguards shown here were purchased with my own money.  I have no connection with ALG whatsoever.

ALG Defense is the value brand side of Geissele Automatics, makers of very high-end and very expensive gun parts. The ALG line is simpler and moderately priced.  If I’ve heard correctly, ALG is owned by Bill Geissele’s wife and ALG are her initials, and her favorite color is purple… so you will see a lot of purple products. EMR stands for Ergonomic Modular Rail.

My precision rifle, mid-length gas with a 12″ EMR V2

Before I make my case, let me say that I am a nerdy civilian in my late 40’s with a small budget.  I have been shooting and building AR rifles for many years and fit best into the modern-Minuteman category.  I am neither a door-kicking infantryman nor an LEO.  I need a simple, reliable rifle that can serve neighborhood watch and also boogaloo duty.  I don’t have a lot of money to test gear that doesn’t satisfy and I don’t have much interest in fashion, particularly gun fashion. Trendy gear or Gucci-gear irritates me. My gear must be practical, affordable, self-serviceable, and meet my needs. I regularly test myself and my gear at local “tactical” shooting matches and have used ARs with standard A2-type handguards with great success…. but after writing the Before-And-After free-floating article, I decided to test my limits with accurate bench shooting with an AR-15, and using a free-floated barrel is necessary.  What handguard to buy?  I settled on the ALG EMR series, and it would take a lot to make me use something different at this point.  I am thoroughly happy with them.

Once installed with the purple barrel nut wrench, the handguard slides on and is bolted down to the sturdy barrel nut. It’s a perfect and precise fit.

The first free-float handguard I bought was an early Troy brand that attached to a standard GI barrel nut with little c-clamps.  That didn’t seem too sturdy to me and I quickly sold it.  A very popular current design method for various handguards is to have a split at the bottom of the handguard that uses bolts to pinch it together around the barrel nut, and I have one of those. But this friction-only method or the later addition of adhesive (glue?) or a bolt that goes in a groove on the barrel nut never impressed me. By pinching the handguard together at the bottom, it creates stress on the metal which can lead to failure, especially under tight sling tension. BCM claims on their website that the squeezing at the bottom causes the top of the rail to slightly deform, so their mount squeezes at the top. Well, okay.

A clamp-on handguard above and the EMR direct bolt-on below. The EMR design is stronger and puts less stress on the handguard.

The ALG EMR avoids all of this metal stress by simply bolting the handguard straight on the barrel nut, no stress on the metal, and no stress on you in attaching it. It is very easy to assemble and easy to take the handguard off of the barrel nut if need be. It does require a special barrel nut wrench, but that’s only a $5 extra charge, and you’ll use it for all the other EMRs you will buy. The EMR barrel nut and handguard mating surface is long, which prevents flexing or slipping at the barrel nut end when force is applied to the front end.  There are more rigid mounting designs than the EMR, such as the LaRue, but they are bulky, complicated, and expensive. The EMR serves my purposes well.

Look at that gap! Sweet! Once assembled, there is a slight and necessary gap between the handguard and the upper receiver. This prevents the handguard from making contact with the upper when using a loaded bipod or other shooting aids like a tight sling

Ergonomics and other Design Features

The second feature that makes the EMR a winner is the shape of the handguard. The E in EMR stands for ergonomic, and yes it is.  It feels really good in my hand, unlike a quad rail. When the human hand grips something, it’s most comfortable if that thing is round, not square. Corners suck. The EMR has no corners, except on the Picatinny rail (if it has a rail). It’s embarrassing a bit, but I want to touch it. It feels like it belongs in my hand.  I want it there.  That may just be my preference, so let’s move on to something more objective.

The diameter is just the right size, not too big, and not too small.  The trend in free-floating handguards is to make them smaller in diameter, to the point where some are now labeled “super-slim”, and longer too, out to 15 or more inches.  But this has produced a problem.  When fired, a rifle barrel vibrates, and a free-float handguard is supposed to allow the barrel to wobble freely.  These narrow handguards do not give the barrel or the covered gas block room to freely move, and they bang around inside like the clapper on a bell. Try this: take a free-floated rifle barrel and hold it in one hand by the handguard, then take the palm of your hand and push the muzzle to the side.  Can you push hard enough to make the barrel or gas block touch the inside of the handguard?  Too small!  If you can apply enough pressure by hand to get contact with the handguard, it’s happening every time you fire the rifle. This problem gets worse the longer the handguard gets. (Editor: load a bipod? Check your gas block. It may be touching something.)

Super skinny handguards do not leave enough room for the barrel and gas block to move freely.

The EMR is large enough in diameter to give enough room for the barrel to vibrate without touching the inside of the handguard, and yet small enough to be sleek and easy to handle.  It’s about as big around as a toilet paper tube in your hand.  My advice if you purchase ANY free float tube… ALG, or otherwise, is get one just long enough to cover the gas tube interface with the gas block.  Super long handguards turn into super long levers when pressure is applied to the front end, and you don’t have to be Archimedes of Syracuse to know that a little force on a long lever can move or bend quite a bit. Shorter equals rigidity.

ALG EMR: Plenty of room inside for a low profile gas block to vibrate during firing and not touch the inside of the handguard.

Discontinued Faxon on the left, ALG EMR in the middle, old-school DPMS on the right

The shorter the better. When choosing a free-floating handguard, choose one that will just cover the gas tube connection to the gas block. The longer the handguard gets, the more it will bend under pressure.

The EMR also comes in various configurations, labeled 0, 1, 2, and 3.  Variant 0 has no attachment points save for a ring of basic ALG slots at the end. Variants 1-3 all have M-Lok slots along the length of the handguard.  Variant 1 has no top rail, variant 2 has a short M1913 Picatinny rail at the front end for a front sight and smooth ramp at the other end to transition from the upper receiver rail, and variant 3 has a full length M1913 top rail.  It may be a secret, but the “not M-Lok” slots on the V0-E will take some M-lok devices that do not span two slots, not perfectly, but they will work. All EMR handguards also come equipped with anti-rotation tabs and two integrated anti-rotational QD slots at the base of the rail at the 2 and 10 o’clock positions. There were some keymod EMR handguards made at one time, so there are some out in the wild of you have your heart set on that system.

V0-E is smooth with slots for a special ALG rail at the front (but some M-Lok work, shhh!)

V1 has M-Lok slots all around, even on top

V2 has M-Lok slots all around, with a smooth transition from the upper receiver rail and a short section of rail at the front for a BUIS. If you want a BUIS, this is the smooth rail to get

The third feature that makes the EMR a winner is the price.  As of this writing, EMRs at Brownells run between $145 and $175 based on length and variant.  Sometimes you can buy clearance or blemished products right from ALG’s website, and for a while the V0-E handguards were on a blowout clearance for under $50.  I bought several.  Even at full retail price, I can’t find another handguard that has as many features and does the job as well as the EMR at its price point.  It’s simply the best handguard in its class.  However, in looking at various vendors in writing this article, I cannot find any V-1 or V-0 handguards in stock.  That may be due to production shortages, but I hope it isn’t because ALG has decided to discontinue them.  These simple, well-engineered, and robust handguards fill a need that nothing else can do.  If you want a V-1 or a V-0, search the gun boards and used markets.  They regularly sell for under $100 used. But don’t forget the purple wrench!

closeup of the front rail section on the V-2

If you want to use BUIS, get the V-2. ALG offers a bolt-on rail for the smooth top rails, but it might interfere with the gas block underneath. The V-2 has the rail already machined in place, with lots of room for the gas block

An M-Lok flashlight mount fits on the V0-E. It’s not an exact fit, but it will work.

← Primary Arms SLX MD-25 Review: Best Budget Red Dot of 2020?
The Modern Minuteman Rifle Concept: An Ar15 That Can Do It All. →
Scroll Up