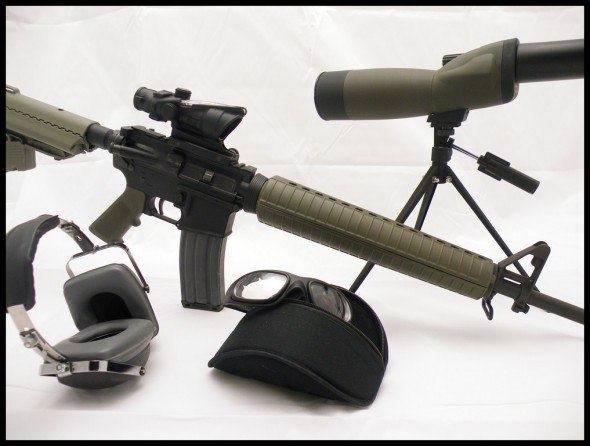 Winter is here and I am in the basement. Its during this time of cold solitude that we can take our equipment and prepare it for the competitive season. During my first competitive season I learned many lessons, and I like to keep passing them on. Keep in mind, that despite your best efforts, junk breaks all the time, but their are steps we can take to give our best effort at keeping your gun running and to keep the important bits from falling off during prolonged use.

These exposed screws are just asking to fall out if a thread locker isn’t used.

Nothing will ruin your chances quicker than screws backing out and things falling off your gun. If your weapon has threaded screws, there is no reason not to use a locking compound. Among the strongest for heat resistance is ROCKSETT. Its well respected for being heat resistant, yet it is removable by the common man when the part needs to come off. The screws on my Aero Precision M4E1 got a nice dollop before final torquing.

Need a paint pen? Head to the nearest Wal-Mart.

If you still rock thumbscrew mounts like I do, then its important to torque them down. I had a thumbscrew rear sight on my LMT BUIS back out during competitions and all of a sudden I couldn’t hit anything. Guess what? Finger tight was useless. The LMT sight was wiggling at the end of that run. Now I use the flat slots to torque my screws down far tighter than hand tight. I also mark the amount of torque I need to ensure repeatability of the mount. I also mark the optics position on the gun to ensure I don’t mis-slot it when it comes off and goes back on.

If it can be staked, stake it!

Ugly? Yes, but it has stayed put.

See that ugly, crappy stake job there on the castle nut? Its held up for many shooting seasons and hasn’t loosened. Its ugly, but I don’t care. It stays put.

Some good staking on this bolt carrier

I hope your gas key has good staking, give it a look over and try to wiggle it. This gas key is staked solidly and doesn’t wiggle.

Does your carrier group stand up on a fully unlocked bolt? If yes, then your gas rings are still good to go.

Testing my gas rings by placing the bolt carrier bolt down. If it stays put without falling into the locked position, your gas rings are still tight enough to form a decent seal.

If it falls down to the locked position, replace the rings.

So these are a few things I went over on my rifle today in preparation for the first range trip of the year and to prepare for the 2 gun series I signed up for. I am really looking forward to the function test in addition to a review of the Criterion 18 inch Hybrid Contour Barrel.

← Leupold’s D-EVO and LCO Look UN-Revolutionary.
What If My Range Only Goes to 100 Yards? →
Scroll Up