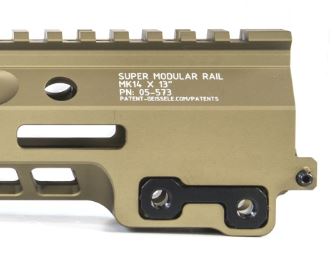 Modern free float rails are really slimming down. I have some concerns. I have really come full circle for my thought process on super skinny modular rails and my conclusions are not re-assuring. As AR accessories have progressed, we have moved towards ergonomics and modularity. We have lengthened free float rails and slimmed them down. Warfighters need room for grips, lights, and lasers so it’s understandable that shooters want the real estate. Well… What we have done is created a long, skinny, skeletonized beam and weighed it down at the end. Is this the formula for durability? Read on:

Take this with a grain of salt until we receive some more clarification from the military, but the following appeared on a Facebook URG-1 group page. A user posted a spliced PPT image from an unknown slide series which claims to show the Geissele rail suffering damage during drop testing:

“During testing the rail when dropped shifted 10+ moa while a m4 only saw 3 moa. Source is a pp presentation the army put together. Anybody have anything on this?”  User MadMax 1611 – Geissele rail scuttlebutt Editor’s Note: Geissele has deleted the thread.

This army PPT presentation lacks context. We don’t know the specifics of the info, and perhaps it is illegitimate. As a result of the above slide and those very same questions, several Mk16 owners on AR15.com decided to put the issue to bed by performing their own very simple drop tests. The results?

Let’s take a look at a sample of some user posted photos after their own drop test:

Collage of damage to the rail – Original Images and additional images in thread: Geissele rail scuttlebutt Editor’s note: Geissele has deleted the thread.

The user revealed that the gas block made contact with the rail causing significant interior deformation and loss of MAWL zero with his drop test. The test was then repeated with a brand new rail and another user recording the test:

So we have several cases with the URG-1 deforming upon impact (with mawl attached) according to these users on AR15.com. In the above video, the gas block again contacted the inner rail and appears to cause some damage. Now would these rails fail without a MAWL? That’s what we don’t know. My bet is not. The added weight of these laser aiming devices no doubt play a role in the deformation as they simply add weight to the end of the beam and exacerbate the flexion upon impact. The MAWL weights 10oz by itself! So are  modern thin and skinny free float rails durable enough to handle these devices?

Geissele is well-respected and makes “bombproof” products. Bill notes that the Mk16 was designed to meet the customer’s specifications. We have many rails from a variety of MFG’s that are outwardly similar to the Mk16 and feature plenty of MLOK slots on every facet. I think they would meet the same fate. I think the lesson is that longer, skinnier rails in general will be weaker than the thicker, shorter quad rails of the past. Case in point:

The M4 KAC RAS showed less deflection in the PPT slide. Why? I think its simply stronger by design. The KAC RAS attaches to the hand-guard cap and delta ring assembly. It is not free-floating. This means that the major support structures of the rail are the rail itself *AND* the barrel. Together they form a more durable structure than the Mk16. Can any free float rail compare to the strength of a quad rail assembly wrapped around a M4 SOCOM barrel? I am beginning to have my doubts.

Turns out the old warhorse KAC RAS still has some game in this day and age.

I have had these concerns for some time, but I didn’t have really enough data or examples to make a convincing argument. I began to write about my concerns in July with my DMR article. I noted that its relatively easy to twist and shift long skinny rails. With these issues rearing their head on the MK16, I think I have some additional examples to bolster my argument. Many other skinny rail designs could/will suffer the exact same fate when dropped. If your laser and BUIS are no longer able to hold zero due to impact then we would consider that rail a no-go. Minimal gas block clearance, long skinny beam with lights and lasers at the end… It’s a zero shift waiting to happen! These issues from impact are of concern enough, but think about this as well: the barrel whip of skinny barrels can also cause a rail to contact the gas block. This will be exacerbated by MID LENGTH gas systems.  This may lead to inconsistent accuracy.

Long, skinny, skeletonized, and weak with very narrow clearance of the gas block does not a confidence inspire.

There are several failure scenarios with a skinny free float rail:

These scenarios weren’t a wide-spread issue with older free float systems. I have been here a long time. I first purchased an AR in 2002 and have been obsessed ever since. Go back a few years in your mind. Think about our old quad rails with lots of internal clearance, thick walls, and more weight. (Ugh, I don’t miss the weight!) Now flip over to the modern era where we are equipping  longer, skinnier, narrower, skeletonized systems with very little clearance between the gas block and rail. Which one will tolerate impact better? I thought so too.

So how do we get around this? I have a few suggestions:

Solution 1: Choose a rail length which allows the gas block to remain exposed.

This is an obvious solution for the super slim rails. In addition to removing the tight clearance issues, the shorter rails will also be stiffer. The modern rails pushing 15 inches are less stiff than their 12, 9, 7 inch (etc) counterparts. It’s just leverage. The longer the rail, the more leverage the aluminum must resist to ensure it doesn’t bend. Shortening the rail and exposing the gas block stiffens the rail and ensures the gas block plays no part in damaging the interior of the rail.

I found the Aero Precision Atlas S-One to be super slim and ergonomic… in fact its my favorite rail… but the clearance is so tight below the supplied gas block that MLOK accessories contact the gas block when installed. I am likely going to order a shorter model that sits behind the gas block.

Not worried about impacts? What happens if you mount a bipod at the end of a 15 inch rail? Is the bipod load causing your rail or MLOK accessories to contact the gas block? There goes your primary optic’s zero as now your rail has applied pressure to your formerly “free floated” barrel. Some gas block and rail combos are so tight that hand pressure on the barrel can cause it to contact the rail!

What if you drop your rifle and the rail is now contacting the gas block? Bye bye primary optic zero. Bye bye BUIS zero as it’s now canted with the rail. This is not a good scenario.

Solution 2: Choose a rail with a larger I.D.

Though these rails can still shift on impact, if the clearance between the gas block and rail is large enough then it’s one variable that can be eliminated. Your BUIS may be tweaked, but your primary optic will remain un-affected. If you MUST hide your gas block under the rail, get a rail with more, and not less, clearance around the gas block.

Old school rails might not be high-speed… but good old quads may in fact be stronger than M-Lok simply due to the extra material of the picatinny rail. I don’t own the above rail anymore because it stopped being high speed! Don’t I feel dumb.

The impetus for writing this article is to air my concerns regarding super slim / super skinny rails. I believe my concerns to be valid for all skinny rail systems and we should be aware of rail length, gas block clearance, and be aware of the effect of heavy accessories at the end of a long rail. One drop and your gear is out of alignment. BUMMER.

From here, I hope our collective knowledge continues to improve. I hope I have opened some eyes regarding this recent trend towards modular, skinny, long free float rails. Sometimes its good to take a step back and examine equipment from outside the you-tube bubble. We buy this stuff for sport, but we recognize it can be used in emergencies as well. We hope we never have to worry about our optics losing zero in a life or death scenario… yet several thousand miles away there are individuals who depend on the strength of their equipment to stay in the fight. Our collective passion (and greenbacks spent!) for the black rifle has helped usher in an era of R&D unmatched by any other weapon in existence. As a community, we must also recognize that there are limitations and dead ends… even if those dead ends are popular and enthusiastically received.

Update 6/19: I have been observing the ongoing saga and it is necessary to note that Geissele has locked and deleted threads and blocked users who ask questions about the drop testing on platforms such as IG, Facebook, ar15.com, etc. I am sure the team will stand behind the rails warranty, but silencing critics and deleting questions is not a good showing.

Be aware, keep your rifle ready, your powder dry, and build them to be ready for anything.