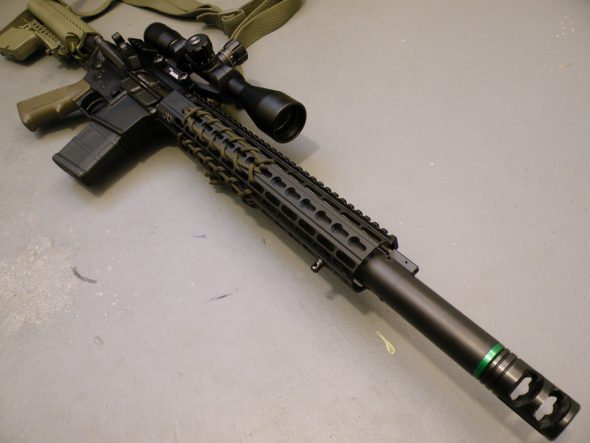 Over the last few years, the quality in the A15 barrel market has improved substantially… even basic, free floated barrels have been shown capable of 1 MOA or better with quality ammunition. Not only has the quality improved, but so has the pricing. In spite of any advancements the market has made on cost and quality, barrels still face the same problems that they faced 100 years ago; harsh firing schedules deteriorate accuracy and will anneal the steel, groupings walk as the metal heats up, and accuracy nodes have to be “isolated” to get the most out of a product. At the highest levels of competition, shooters will discard a barrel after a few thousand rounds to make sure that the barrel isn’t a factor in their overall score.

Teludyne Tech says they have found the answer to these age-old problems… through what can only be described as a total departure from traditional barrel manufacturing methods. Teludyne’s answer to the quest for accuracy is simple on paper; they begin by turning down your existing barrel to a skinny profile, they then insert it into an aluminum sleeve and fill the void between barrel and sleeve with a proprietary compound. The pressure the compound exerts on the barrel is said to be something close to 13k psi which adds stiffness and structure to the bore. Additionally, the composite compound acts as a heat sink by drawing heat away from the bore and towards the aluminum jacket, and then to atmosphere.

That’s hard to digest… Let’s break down some of the benefits and concepts that Teludyne claims the SJ system accomplishes:

Teludyne claims that their Straight Jacket stiffens the barrel some 900% over a similar profile steel barrel. So how does that help? For starters, the increased stiffness negates the accuracy loss from barrel whip. Everyone who has seen high-speed video of a Ar15 firing has seen the barrel dance and whip as pressure is built up and released in the propulsion and expulsion (uncorking) of the projectile. Skinnier barrels will have more whip, and heavier barrels, being stiffer, will have less whip at the cost of weight. When a barrel whips, there is the potential for the barrel to release the projectile on a slightly different X,Y axis with each shot. If you eliminate whip, then you are eliminating a variable that will get in the way of accuracy. Ideally, a traditional barrel with the correct “tuned load” will release the bullet on a consistent manner with each shot.  The Straight Jacket ensures that each shot is released on the same X, Y Axis so there is little need to seek out a harmonic sweet spot with the barrel.

So what else does it do?

The proprietary compound injected between the bore and sleeve is our next stop. Teludyne claims the composite moves heat efficiently from the bore to the exterior aluminum sleeve. In effect, the entire barrel external of the bore becomes a giant heat sink. Literature provided denotes that “every shot is a cold bore shot.” There have been both anecdotal and substantiated reports claiming that the Straight Jacket keeps things cool. Cal Zant noted, again in Modern Advancements Vol 2, that the Straight Jacket was the coolest barrel tested under FLIR observation. Anecdotal evidence stems from YouTube where we see shooters put their pinky into the barrel chamber after long strings of fire and suffer no injury. By keeping the barrel cool, Teludyne claims there is an increase in weapon reliability and a substantial increase in bore life.

Teludyne Includes their muzzle brake which matches the OD of the barrel.

Temperature extremes also are reported to have little effect on the Straight Jacket. Teludyne sent off a 300 Win Mag barrel for a before and after evaluation to H.P. White Laboratory and published the results for all interested parties. They also had a forensic firearm examiner make sure the barrel was not swapped or tampered with other than the installation of the Straight Jacket. It can be accessed Here.

In addition I found this quote on a few press releases:

Comparative analysis of the Teludyne URG1 placed side by side to a match grade M4 resulted in cold bore accuracy improving by 75% right out of the box, and after firing 120 rounds in 2 minutes, accuracy improved by 671%. Subsequently, at 600 meters, the URG1 grouped at 7.07 inches versus the match grade M4s 54 inches tested 15 minutes after 220 rounds of rapid fire. A thorough validation of TTI’s accuracy claims has been conducted, documented and published by both TTI and by H.P. White Laboratory, Inc.

I applaud Teludyne for going the extra mile and pushing their product with published testing data. It shows a great deal of confidence in their product. I am no H.P. white Lab, but I am going to do my best.

This is the start of a series of reviews and experiments on the Straight Jacket system.

My sample of the Straight Jacket system was installed on to a Criterion chrome lined hybrid barrel chambered in .223 wylde. Prior to the jacket installation, the barrel a few thousand rounds down the bore prior to this point. It was typically used in slow fire environments and long-range shooting at New Holland Rifle Pistol Club and was never pushed to the “cooking bacon” point by a harsh firing schedule. With the Straight Jacket now in place, I will start testing and evaluating the barrel on a running basis. I am no H.P. White Laboratory. I will do what I can to catalog and evaluate this barrel with the readers over time, and share results on a running basis.  I initially did a before and after comparison between the Criterion Pre and Post Jacket, but several factors have made me realize that the data is skewed. (note: one factory Hornady load I tried is so terrible, and would make a laser gun look like a mini 14) I will publish the data, but first I am going to isolate a few more variables.

I have hit the range twice now with the system and it is too early for conclusions other than, at this point, I feel that I am limiting the barrel. I shot one ten round group that made my eyes pop. I had “flyers”, but with 6 shots landing in at .31 minutes… something is up. Six shots don’t just land on top of each other like that unless something is very consistent. I didn’t hand load them either, I shot semi-auto. The photo / group in question will be published with my first article on the SJ system’s accuracy.

I have decided to conduct this review in several phases, the first phase being accuracy evaluation and I will be re-working some of my loadings to remove ES, SD, and jacket construction factors from the equation. After the first range session, I realized that some of my loads aren’t up to snuff. Are they limiting the barrel? That’s what I don’t want. The barrel must be allowed to speak for itself.

So what’s it cost? Some may scoff at the price, retail cost on the Teludyne Tech website for the AR conversion runs a bit south of $900 dollars. In 5.56 it may seem like a steep entry for such a diminutive caliber, but understand that TT can Jacket any caliber you send to them. I have 5.56 guns, so I got a 5.56 gun back for T&E. Simple as that. If you are shooting a barrel burner, it may be well worth the cost to defer the time and energy it takes to re-barrel, break in, and sight in.

I have been quite disappointed by several media and YouTube celebrities who have obtained a Straight Jacket system, but then failed to follow through with thorough testing. If half of the claims from Teludyne are true, then we have a breakthrough sitting right out in the open. Expect accuracy testing, heat testing, and rapid fire evaluations. A picture must be painted that is both FAIR and THOROUGH. I will do my best guys! I have been compiling video as well.

Look for this barrel in the coming weeks Right Here.