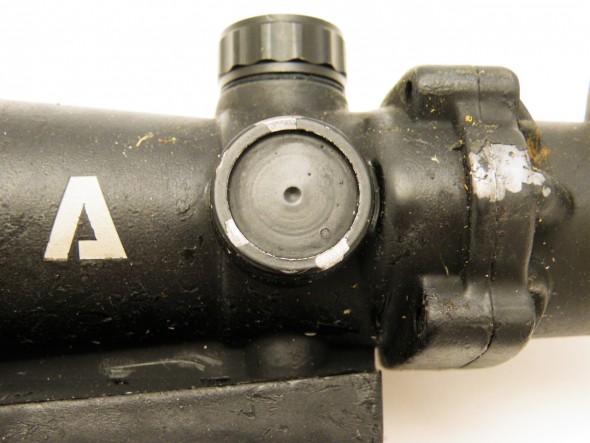 I just don’t know the guy. For your information, Glyn Bindon was an entrepreneur who has had tremendous influence on our military and AR15 community. The ACOG is iconic and is a trusted combat optic that has served our fighting men as well as shooting enthusiasts with a compact optic with industry leading durability and illumination… and eye watering price. Many readers know I have been waiting patiently for a price competitive ACOG to make its way into the market. Now that Trijicon’s patent on the ACOG is expired, I want a product that I can recommend to people that is both tough and just as intuitive as the ACOG itself.

Mr. Labita (see that?) started a company to bring affordable weapon sights to the people and I have been watching them for a few years now. They sell some stuff that I do not have interest in, and other stuff that I very much had interest in. The ACOG clone known as the AT-AGB 4x was that product I was interested in. The sight has been sitting on my shelf for a year before I was finally able to put it through its paces. I blame life.

When I first received the sight, I examined it closely and side by side with my TA31F. Right away I could tell a few things: the Atibal product incorporated design elements of the real deal ACOG. The prismatic assembly was cut and angled the same when examining both through the objective. The field of view and eye relief are exactly the same as a 4X ACOG. The dimensions front to back are nearly identical. It shares the familiar TA01-NSN reticle… While there may be some mechanical differences in the assembly, this is no doubt much of Glyn Bindon’s design in a $350 dollar package.

So as a budget ACOG, how does it stack up? The primary claim to fame for the Trijicon ACOG is its battle proven durability. It’s a tough optic thanks in part to its forged housing and internal adjustment assembly. This is a key point for any product wanting to be an ACOG… is it as tough as an ACOG?

Before I even mounted the ATIBAL to the gun,  did some impromptu drop testing. I threw the AT AGB at the ground, at a tree, and on hard surfaces. My impromptu test was simply to see if I could shock anything in the optic loose. No dice. That’s a good sign. I then loaded it up and took it with me to the range. I got it sighted in roughly at 50 yards as my time at the range was running short… The AGB is a 1/4 x 1/4 minute optic and sighting in was typical and without issue save for the turret assemblies lacking directional arrows.

In the video below, I let gravity slap the optic around some. I shot this optic with my 69 grain plinkers and was quite surprised that it continued to maintain zero and nothing was breaking. It is important to note, as I did in the video, that this model is Atibal’s 1st gen model, and the newer At-AGB 4x has some upgrades over this older piece: adjustable focus ring, better quality glass, and a new coating. I have not handled the gen 2 model.

So far would sat that I like the optic for its utility and price. If this is anything close to as durable as the original ACOG series from Trijicon, then this is going to be a fantastic option for the legions of individuals who want a tough optic on their rifle, but can’t afford the price tag of the ACOG. While a bit un-refined compared to the real deal, if it gets the job done, that’s what matters in the end. I can afford a $1200 variable with a mount, but… not everyone can. If I can find products to recommend to people that will better equip them to be riflemen at their budget, then game on. So far the Atibal looks to have captured some of that Trijicon magic in a tough and affordable clone.

The Atibal 4x seems to have the durability to stand up to some horrible abuse, but it needs illumination. The changes in the now available gen 2 model are good changes and I would like to see Atibal continue to develop this line into a full featured illuminated optic. If this optic proves as tough for others as it did for me, then I wouldn’t hesitate to equip a few rifles with it… but without illumination you are at a serious disadvantage unless you piggyback a red dot. So far, I give this a recommendation for people who want to shoot for sport or recreation. It is a budget ACOG. I *want* to recommend it for SHTF as it seems tough, but it needs illumination.

I mentioned some of my thoughts on the AT-AGB 4x to the owner and discussed the optic and its future; if generation 3 comes to fruition the way Mr. Latiba envisions… damn. I await with baited breath. He has big plans for his company and several new products on the horizon that are a step up for his optic offerings. Japan anyone?

You can label me a early supporter of Atibal. After watching the company interact with people in various forums I can also say Mr. Latiba seems keep a level head despite his vocal detractors. It’s important to me that a company *NOT* treat people like dirt in order for me to recommend them.

√ Compact form factor is equivalent to ACOG in most specs: wide field of view included

x Turret cap height makes it hard to use BUIS

x Turrets are not marked with POI direction changes

x No Illumination to this line as of yet