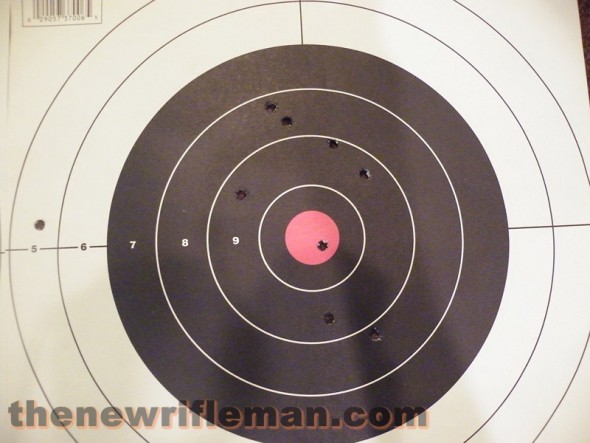 Yesterday I stopped by the range for a quick day of shooting and testing my new ammunition. I mentioned in my last post that I started reloading as a way to shoot for less money.

I shot a test group from a wooden block rest at 100 yards with my irons and you will notice quite a difference in group size.

I am aware both photos aren’t done to scale of each other, but you can clearly see the 60 grain reloads have much less spread than the green tip. Once I obtain a shooting platform where I can eliminate my user error I will repeat this test to see just what the rifle and ammo can do. While I don’t know how much more accurate my reloaded ammo is compared to XM855, I can see that in the same situation I was shooting a tighter group and spending less on ammo. That works for me!

My self assessment, again, was at 25 yards using a 25 meter reduced 300 yard simulated target.

90 Points total. My scoring system is as follows: hit in the ring is 10 points, a hit outside the ring is 5 points, and a miss off target is zero points. 150 possible points. I had some real zingers and flyers but this score is much better than my last attempt.

I will be doing a post about reloading to illustrate that you don’t need a ton of gear to get a quality product. I don’t have a reloading bench. I use scoops to quickly measure a powder. I don’t have a tumbler. I spent a total of $140 some odd dollars on reloading equipment and another $150 on 8lbs of powder and bullets. I used brass I had gathered over time before I realized I would be reloading.

It is a easy process once you understand it and if you have the time to reload you will save yourself money for a better bullet.