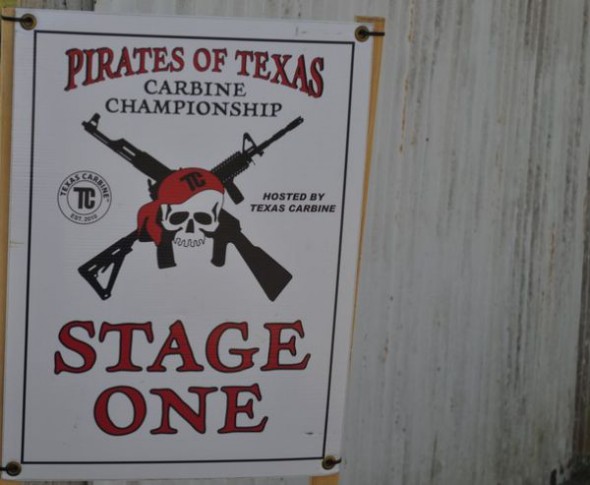 It’s been about 3 years since I competed with a rifle IIRC. Last time I was all geared up, I had the match carpet tugged out from under me by a phone call and a family member in need of a visit to the ER. Didn’t even get to fire my first shot. Now that I am in Texas, I looked around and signed up for the Texas Carbine Championship match in Corpus Christi. I learned some more lessons from this match just as I have from every other match I have attended. As you put round after round down the pipe, you have an opportunity to learn something from your rifle, your gear, and your personal performance.

My rifle is a home brew piece which you have seen recently on the blog. It’s a Ballistic Advantage Hanson SS 16 inch mid length barrel under a Larue 12.0 handguard, a “forgot who made it” upper receiver, a mil spec bolt group, and a Superior Arms “out of spec so I filed down the magazine well” lower, a standard GI trigger, and Vltor stock and carbine buffer. I topped the rifle off with the Atibal Velocity 1-4x for some versatility. This gun is not a race gun. It’s been built off of spare parts, and standard AR gear to ensure it functions with a variety of ammo. I have never competed at these events with a race gun, instead I choose to use a rifle I would call a basic AR15. Something anyone reading might already own. This is the same reason I chose to use a mil-spec equivalent A2 for High Power a few years back. I don’t want a specialized gun just made for winning games, I want a rifle I can rely on and use in a life or death situation.

The event was seven stages, mostly close range, and two distance steel stages rounded up the course of fire.

A boringly reliable gun is an advantage all by itself:

Many shooters ran into problems. Several had a jam or malfunction every other stage or every other other stage. Hard to put a finger on who and what and why, but running ammo that barely cycles your rifle, running lightened buffers and lightened bolts, gassing your gun just enough to cycle, or just plain bad luck, are all reasons your rifle could go down. I saw one case head separation on a .308 reload which was the first shot of the day. Bad luck. I saw multiple little failures that had to be cleared on the stage and that helped me gain a few slots on the leaderboard I’m sure. I was overall a boringly, consistently, mediocre shooter. The keyword here is consistent.  My gun didn’t go down, and that allowed me to just keep shooting, and shooting, and shooting. While I was nowhere near as fast as the dedicated guns and more experienced shooters, my gun made up for it in some stages by just continuing to function.

Federal M193 was my ammo of choice and I ran it through a Ballistic Advantage Hanson pipe… M193 is loaded hot, had a huge muzzle flash, but gave me plenty of gas to run my mid length carbine despite the dust building up through the match. One of the reloads I heard discussed between some shooters was something along the lines of a .223 45 grain bullet over Varget. Varget is a slow burning powder, and stuffing as much varget as you can behind a lightweight bullet which doesn’t take up much case volume is a great way to get a very gassy gun. That slow burning Varget will still be burning after the bullet has left the barrel and that excess gas will push on the compensator baffles of a race gun. Ingenious old man, ingenious… His gun shot flat and he was an amazing shot as well, but IIRC he had a failure during the course. The particulars of his setup are not to my knowledge (buffer weight, bolt, trigger, etc) but that machine was likely tuned to that loading. Did it affect the reliability? Maybe… Or maybe it was plain old dirt. Who knows? I was proud of my rifle since it never once waivered. I attribute this to using “standard” components, proper ammo, and good magazines.

A variable is just too useful:

Well, this one isn’t that hard of a concept. Stage 7 was a 190 – 220 yard steel shoot from a barrier in which the shooter must engage and hit all targets before moving to the bridge. The bridge was a bridge suspended by chains which could move fore, and aft, side to side, freely. This stage sucked. My 1-4x Velocity was a great tool to have for this stage. It has a simple free floating duplex crosshair and I cranked it up to 4x on this stage. Many other shooters were running a 1x optic of some sort, and I suspect these shooters had the most trouble at this stage. As the bridge moved with shifting body weight and gunfire, you had to watch your target and wait for the sway of the crosshairs to align with the steel. Fire. Most shooters timed out, which means that the stage time limit was reached, and un-shot steel was counted as a did not engage. I managed 7th out of 117 shooters on this stage. I cleared it and I could not have done it without a variable. I needed that magnification to clearly see when my crosshairs lined up with the steel, and here a red dot would have been not too useful.

The steel is difficult to see, but its back by the water. The sun was in my eyes and wearing the cap front ways with the gopro clip was screwing with me, so I didn’t record this stage.

I might have given up some speed at the close range stages to a red dot, but when I was cranked down to 1x, I had a clear view of my targets and shot as fast as I could go. The variable wasn’t slowing me down, it was my muzzle flip that was costing me time on each shot. A red dot wouldn’t have improved my speed much at this point. Being able to pick and choose my magnification for the stage was a invaluable tool and my rifles will all carry a variable of some sort forever. It makes a huge difference. A general purpose rifle should have a general purpose optic.

A Compensator Is a Balancing Act:

The M4-72 is an amazing compensator, but the gas blowback is a hurricane. If I shot this on the dirt form an unconventional position, I would worry the sand would blind me temporarily.

I used a M4SD for the competition. Much less gas all over the shooter and the ground, but less recoil reduction. Question your setup, do you want a race gun or a all around rifle?

A compensator dedicated for 3 gun can be a great tool for steady shooting. I saw some amazing setups where the barrel just didn’t move. Some stages required all shooters to manage their gun in an enclosed space such as a tube, simulated building, or walled area. Those compensators were face slappers in enclosed space, and something a bit more subdued would be nice at the sacrifice of recoil management. These are race guns, and they can afford those compensators, but had the stage made us shoot on the ground from unconventional positions, those race comps would have dusted crops. The dirt in Corpus Christi was fine, dry, and copious. One of those race comps let off in dirt would have likely blinded you with debris and made it impossible to shoot effectively. My Griffin M4-SD compensator offers a bit of recoil reduction, but is more of a comp designed to mimic the size and shape of a standard A2 flash hider and thus has a single baffle and vents gas in all directions except 6 oclock. It surely would kick up dust too, but nothing like the leaf blowers I saw at the match. Again I realize they use those compensators for the sport aspect, but I am discussing this as a warning to anyone to not go too crazy with the compensators on a defensive rifle. I ditched my M4-72 compensator for the same reason and went back to a weaker performer with the hope that if I shoot close to the dirt, I will have less crap blown around.

What a great match! I saw some awesome shooters, was schooled, but managed to be consistently mediocre enough to score 27th out of 117 competitors. My squad had some of the top performers in the match, and I thought I was doing much worse than I was based on their kick butt performance. I was a little rusty and began to regain composure towards the end of the match, so it pays to calm down and slow down if necessary. Make the shots count. My rifle functioned flawlessly, and this gives me confidence with this relatively new build to keep shooting it as is and I know I can count on it based on this match and all the shooting and testing I did after building it. Get a variable and learn to use it. The Velocity was also a “non issue” in that it was reliable and gave me no drama. It added much to my long stages and gave me the advantage I wanted when shooting distances that seemed “easy at the range” but when under pressure became very difficult.