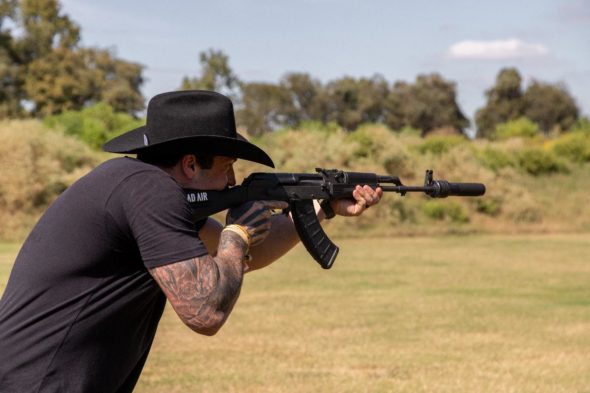 In the past few years, there have been a growing number of American gun owners who have become interested in the AK series of rifles. Since we have our own domestic rifle, the AR series, there is a relative lack of good training materials on the AK. Here, we’d like to help address that just a little bit by giving some commentary on training with the AK.

We’ll start with a few important notes for getting the AK zeroed. From there, we’ll talk about the manual of arms and how it differs from the AR, before rounding things out with short discussions about accuracy expectations and accessories you’d want to consider.

Tools for Zeroing the AK47

To get your AK47 shooting as well as it can, we recommend getting two important tools that will serve you well. First, there are special targets available that come with instructions for zeroing the AKM series of rifles in accordance with their iron sight markings and Soviet doctrine.

From there, to adjust the front sight you’ll need an AK front sight tool. These are a little pricey for AR folks, who are used to using either cheap sheet metal tools or, more likely, the tip of a bullet. Check out this website if you are looking for some good promos. But, assuming you don’t lose it, you’ll only ever need one AK front sight tool, so get one and keep it somewhere safe.

Of course, you’ll also need ammunition for sighting the rifle in. Here, cheap, steel-cased surplus ammunition is more than fit for the task and is often more consistent than commercially made ammunition today.

Before you get into other parts of training, it’s worth dedicating an entire range session to getting to know your rifle for the sake of zeroing the rifle and also memorizing the sight picture and trigger. These basic parts of learning how to shoot a particular weapon system well are basic, but they are also fundamental to getting the most out of the weapon platform. In well-trained hands, an AK is an exceptional rifle, and you’ll soon learn why it’s been so popular for over half a century at this point.

Rifles are all somewhat similar. Make sure it’s loaded, point the dangerous end at the target, and squeeze the trigger slowly for best results. That’s why a lot of AR shooters think they can pick up an AK and think they’ll do well. Here, it’s vital to take a second and walk through the important differences so you don’t stumble so much with your AK.

To load an AK, inserting the magazine is a little different than in an AR. For an AK, you need to seat the front of the magazine first, then rock it back into place. When the magazine is seated, pull on it to make sure you got the rear part in well. Then, the charging handle is on the right rather than on the back: most right-handed shooters prefer to use their left hand, brought over the rifle, to cycle the bolt and cock the weapon?

If the bolt won’t go back, that’s because your safety, which is a piece of sheet metal that physically prevents the bolt from traveling, is in the up position: most people will find that they can bring the safety, which is on the right side of the receiver, down with their right-hand index finger with a little practice and some maneuvering.

Once you’ve expended your ammunition, things are way different from an AR. For one, the bolt will go forward after the last shot and you’ll know you’re empty when you get a click. Then, to get the magazine out, there’s a paddle by the trigger guard rather than a button on the receiver.

We recommend taking some time, without live ammunition, practicing loading, cocking, and reloading the AK until it’s a smooth operation for you.

Keep in mind that the AK47 was designed as a frontline infantry rifle meant to replace submachine guns and carbines in Soviet Military service. Hitting a target at 1000 yards was entirely possible in 1914: accuracy does not win modern wars by itself. The volume of fire, on the other hand, makes a big difference.

That’s why the AK is about a 2-4 MOA gun depending on the particular firearm: you can expect 2-4 inch groups from a bench rest at 100 yards. Assuming your goal is to use an AK as a defensive weapon, it is totally reasonable to expect, with iron sights, to make hits on a human-sized target at 300 yards. More than that, and you’ll need both magnified optics and a fair bit of luck as you’ll be beyond the effective range of the cartridge. The AK is a combat rifle first and foremost: you can get good accuracy out of it but this is not what we would be willing to call a precision sharpshooting weapon.

Assuming your AK is a defensive rifle and not simply a toy, we think it’s incomplete until you put a sling on it. On a simple AK build that might be all that we do.

If, on the other hand, you’re considering getting a little more contemporary, then it might be worth looking around for a front handguard that has some rail sections that allow for the installation of a weapon light at the very least. Whether it’s with a side receiver mount or on the handguard, a red dot sight can also be a good option. Lastly, we think that some kind of small hand grip also makes the recoil a bit more manageable for a lot of shooters.

In this piece, we’ve looked at some training tips to get you up and going with an AK47. While it’s a little different from an AR, especially in terms of the manual of arms, a lot of the same general principles apply.

With just a little bit of practice, a few tools, and some ammunition, the AK series of rifles are reliable, reasonably accurate, and perform well for a wide variety of purposes.

← The Meprolight M21: Missing the Mark
Sidearm Sunday: Is .30 Super Carry Worth it? →
Scroll Up