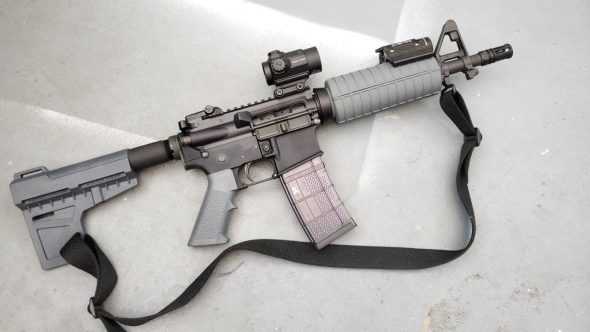 When did you realize you were going to be a gun owner? Was it was going shooting with a friend or family member and wanting a gun of your own, or are you looking to get a gun for self-protection and/or concealed carry due to the riots and civil unrest going on near you? Or perhaps it’s just wanting to exercise your 2nd amendment right as a red-blooded patriot. Whatever the reason, we are constantly seeing a stream of new shooters visiting, and covering the basics is an ongoing process. When you buy a gun, you aren’t buying just a gun. There are a few more things you need to ensure you can use the rifle effectively.

When you buy a gun, obviously you need magazines and ammo to go with it, I will count 3 extra mags and 1k rounds of ammo as a base. Not everyone will buy 1000 rounds of ammo to start since it is so scarce, but if you can… you should. You can learn a lot with 1k rounds.

What all do you end up buying for a gun though? You have magazines and ammo, what more might you need? This part is going to be more relevant for new gun owners vs existing gun owners, however, you know what you have and what you don’t have. So pick and choose what applies to you. You are going to need a sighting system if you don’t have any, let’s call this item number 1a). Item 1a) could be iron sights, it could be just the rear sight, or it could be a red dot. Item 1b) would be the top priority if you already have a full set of irons (front and rear sights) with that being said, 1b) is a flashlight because you can’t shoot what you can’t see. Item number 2) that you need would be a way to carry your firearm. Whether that is a sling for a rifle, or a holster for your handgun, you need a way to carry it. And last but not least, 3) a cleaning kit. You need to be able to clean your gun to keep it from malfunctioning and running like a sewing machine. There are the top 4 necessities right there, Sling, light, sights, and cleaning kit. Everything after that is nice to have, but you will buy them anyway because well, they’re nice to have.

I feel like this is a no brainer, but I wanted to touch base on it. If you don’t have sights, you can’t shoot accurately. Your sights are a system to align your rifle with your target. You need irons or an optic. Iron sights are cheap. The Magpul backup irons are good enough to get you started. They are cheap and work. If you wanted to get a red dot, which has been proven to be much more effective and easier to use, you are looking at spending a minimum of roughly $150  for a Romeo 5 which I recommend, or $250 for a Holosun 503 which has outright been impressive, and the Trijicon MRO at $419 are all optics I would recommend and have personally used. TNR recommends each of them.

If you want to use your rifle for some longer range shooting while maintaining the ability to have a 1x magnification power the Vortex Viper gen 2 1-6x  is a great option and an optic that I really miss. I am currently testing a Leupold 1.5-4 VXR patrol and I highly recommend it as well. I will be starting a review on the Primary Arms 1-8 ACSS scope soon, hopefully, by September or October, you should see an article on it. Finally, if you can afford it, the Sig Tango6T is one of the best optics I have used to date.

Having a light on any home defense gun is a must. If your rifle comes with sights, get a light first because you can’t shoot what you can’t see. Your eyes, need enough data to assess the threat and align the gun. A light is essential for half the day. For a rifle light, I have used an Inforce WML and it worked. I had it mounted at the 12 o’clock position. I liked it, but I had a difficult time, in the middle of the night when my wife asked me to check out the bump in the night, to actuate the pressure pad, so I got rid of it. If the ergonomics work for you, that’s great, use it, it’s solid. I currently have a streamlight protac HL-X in an Arisaka Mlok Mount and I love it. The stock mount for the light and pressure pad are cheap, but will work.

As for handguns, I carry the Inforce APLc every day. It has not failed me, it is easy to use, affordable, and I’m on the original battery over a year later. While I’m not using it often, it’s not draining and still going strong so you can set it and forget it. Apparently the APLc has been discontinued though. So sorry. Another Streamlight handgun light or surefire will do the job though!

For a home defense rifle, it’s debated whether or not you should have a sling. On one hand, should you need to restrain a member of your family because they walk out in the middle of all this, you need to control them… having the ability to retain your rifle while you grab a kid is vital. On the other hand, it’s the middle of the night and your sling could get in the way of manipulation if it isn’t being used. I am left-handed, so slings and right side ejection guns don’t mix well. However, the Vickers sling from blue force gear quickly became my favorite sling for an AR15. I will review it in the future. Slings, as demonstrated in Kenosha, are also are tools of weapon retention. Kyle never lost his rifle. He is slung up.

A quality holster is to a pistol as a sling is to a rifle. Retention and snug fit are important. As for holsters, I have only used the TREX arms Raptor holster. I wish I had the extra mag carrier (sidecar) holster, but oh well. It’s a great holster and I have been happy with it. It’s a kydex holster with a “claw” to push against your belt thus pushing the grip in to your body helping to minimize the outline of the gun on your shirt. It works well, and I’m not nervous to be spotted.

Sling, light, and sight on my Home Defense Rifle. Sling is off when I stored and only put on when I go shooting.

I have never bought a cleaning kit. I have pieced together my own but never bought one. There are so many good products to clean your firearms it doesn’t matter what you have in my opinion. My kit consists of a bore snake, a spray-on solvent cleaner, Q tips that my wife can’t find cause I have them, old rags that can get dirty or paper towels, a soft bristle brush with a regular and skinny side to get small parts/areas. An old toothbrush will do, and oil. Motor oil can work in a pinch, I have used Hoppes 9 oil and solvent. I like the Lucas oil gun oil, it’s a small container with a very precise applicator which I appreciate. If you just oil any modern gun it will run, but clean your gun every once in a while.

While this can apply to any gun you want, it should be your main concern on your home defense rifle. My AR Pistol that is my go to HD gun, is equipped with the Protac HLX light, and an MRO on a midwest Mount that I have done a review on already. I have a sling for it but I do not have it on while it’s mounted in my safe on the wall because it won’t fit and gets tangled. The cost of my HD rifle setup (optic and light) is about an extra $570 from Brownells. Once you add in the Vickers sling and cleaning kit, that’s an extra $690 for everything I have for one rifle. You may have bought your rifle for $600ish from PSA, but you could spend more (or less) than that in an optic, light, sling, and cleaning kit.

The handgun that I carry every day is the M&P 2.0 compact with an Inforce APLc in the Trex arms Raptor holster. Right now my handgun setup (light and holster) is an extra $160 however like I said, the APLc has been discontinued. My handgun cost about $500 and I added on another $160. If you get an optic that cost goes up a lot more. You have the price of whatever optic you get, and the optic mount. So the handgun price can get up there quickly as well.

This is the section of stuff you don’t NEED for shooting, but it makes your life easier. Such as a dedicated range bag. I have a 5.11 rush 24 bag that I use as a range bag. I know where everything is in it too. Having a range bag that you can leave your staple gun in for hanging targets, or a laser range finder which is another nice to have. I keep a multi tool with a bit kit in there to tighten any screws that may come loose because having your scope mount come loose with no way to fix it, ends your day shooting. Or a shot timer for instance. Super nice and fun to have, not a necessity. Another nice to have is electronic ear muffs. I use the walker razor ear pro, they amplify sounds like talking, and walking, but they deaden the gunshot. Super nice to have for when a friend is calling your shots, or a range instructor is talking to you. And my favorite nice to have is a shot timer, it’s almost a necessity, but not for everyone. If you’re the shooter that just wants to focus on making sure you get good hits at a good speed but not too worried about time, you don’t need it. I wanted a way to track my time on how fast I was doing up drills for an example. I want to push myself to be as fast and accurate as I can. It’s also fun when your friends get together to see who has the fastest draw and stuff too!

There you go, for all you new shooters… buying a gun isn’t just buying a gun. You’re also buying a way to aim, a way to see, a way to carry, and a way to clean. Those four things will cost anywhere from $430 to $690 but it’s worth it. Obviously, if you can only afford a gun at first, get the gun, then a light* and the rest come in when you can afford them. Having the nice to haves are things that you might buy eventually. I go shooting with friends who shoot on occasion and they think the earmuffs are cool, so they buy them… but the little orange plugs are cheaper and effective. Some friends end up wanting a range finder, or a shot timer… again all nice to have. Have a complete fighting rifle first. Like I said. Buying a gun isn’t just buying a gun… it’s a system of aiming, visually assessing, retaining, and maintaining.

Light* just means like I stated earlier, if you have irons get a light before you get an optic. Otherwise, get some irons or a red dot if you want to jump straight to it. Nothing wrong with going straight to a red dot, as it’s so much easier to use than irons. Just have a way to aim, and then get a light.

← My Medic 25% Off For Emergency Preparedness Month
Dry Fire Discussion: More than Just Snapping In →
Scroll Up