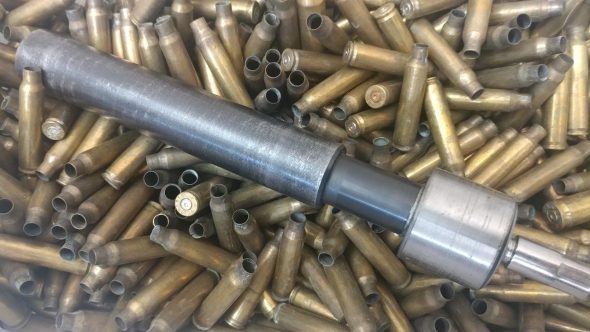 Have you ever been involved in an argument over how useful or useless the receiver truing tools are? If the answer is yes, go ahead and hit subscribe button. Do it, get on the mailing list.

“Upper receiver lapping is unnecessary” When the topic of receiver lapping comes up, there are two camps… the believers, and the non-believers. What can a $15 dollar tool that attaches to a drill do that a $15k CNC machine can’t? I have had that question myself. It is an interesting proposition… does a modern AR15 needs a fool in the garage with a hand tool to enhance the accuracy of the platform past the factory? This has led to many heated discussions online. After purchasing the tool for myself, I came to my own conclusions.

My opinion is this: No receiver is assembled in this house without the receiver lapping tools sweet, sweet kiss. Now for my story:

When I opened the Wheeler Engineering package, I had some concerns. I was kinda sad that the Wheeler tool I opened looked sloppy. I’m talking “It’s Friday afternoon and we clock out in five minutes but we also live in China” sloppy. It had a flex shaft adapter drilled OFF CENTER. It was blued the worst god awful bluing I had ever seen. THIS THING IS GOING TO MAKE MY RIFLE BETTER?

I promptly took it to a precision rifle shop and had them check it out on the lathe. Surprisingly enough, the two important surfaces… those which rotate in the receiver and against the receiver face were true. The tool was OK to use as is, but they cleaned it up a bit for me. So why did I buy this thing in the first place? My Larue 12.0 Equipped A2 rifle. Ever since I installed that rail, I noted that the barrel leaned a little closer to one side than the other. This rail sat perfectly straight in my earlier build, so I suspected the A2 receiver was to blame, and not the rail.

The A2 also had excessive L windage dialed in. Yet another sign to me that something wasn’t quite right. In spec enough to function sure, but I wasn’t happy about that sloppy aperture being so far off dead center. I wanted it PERFECT.

Off came the rail, on went the lapping tool, and when I re-assembled everything was straight in the rail. Sighting in was even better. I was a few clicks off the center of the wind-age. A few clicks? Two clicks off dead center. DED CENTER. DED.

The A2 rifle shot well, it certainly didn’t need to be lapped. It was reliable, the windage was acceptable, and it was a lot of work to tear it down and rebuild, then re-zero. So is it necessary? More and more, I would argue, that yes it is. The propagation of skinny rails that hug the gas black have made it imperative that the gas block remain centered in the rail. Even a little bit of lean will reduce the clearance of the gas block enough to where it could possibly contact the rail, thereby disrupting barrel harmonics.

I think that is a pretty compelling argument in and of itself, but still many (including industry professionals) will say it’s a useless or unnecessary process. “The receiver faces are trued better from the factory on our najita kiwata 24.5 axis warp drive mill than you can ever meet at home with your $20 dollar junk tool and a hand drill, you peon idiot scum!” At least, that’s how I feel about the no lapping ninja’s and their typical response. Very Dismissive. Hurtful. It goes straight to the heart of my human pride it does.

Well well well… have I got a link for them…

A user had a rail that was crooked… or was it?

The link above is a user at AR15.com who noted that their rail was “crooked” and in that thread, a Midwest Industries rep (AKA PETE) came by to deliver some top-notch customer service. They took the upper, checked the rail, checked the barrel extension, and finally discovered what I knew all along… the upper receiver face was not true. They used a $25 dollar hand-drilled lapping tool to correct the issue, and magically, the barrel became centered in the rail.

Does all this seem excessive? Nonsense? It’s not nonsense. Everything matters. Detail is everything. If you want the same thing to happen the same time as last time you need the same things to occur each time, every time, and all the time, just like last time. Got it? A crooked barrel and the unique, off-axis harmonic whip will add a wildcard to your load development. The thermal expansion of the receiver during long strings may allow the barrel extension to slip and shift with each shot since you only torqued that barrel nut to 35 ft-lbs. Your optics might need excessive wind age and you lose half your POI adjustment to the left, while your R windage has double than is necessary. Getting the picture?

How much do these details matter? I would like to refer you, kind readers, to an article titled “Secrets of the Houston Warehouse” and the excellent summary at precisionrifleblog.com. This article is eye-opening to understanding how the smallest variables affect accuracy. The author had to install a barrel assembly by PULLING the assembly towards himself to make sure the lapping compound would make full contact with the threaded barrel and receiver. To neglect that step would be destructive to the finest pursuit of accuracy.

Accuracy is Incremental. In some cases, truing your upper receiver may only help to an un-measurable degree. In other cases, it may make much more of a difference to shooters who can see their barrel is visibly off-center. Almost touching one side of the rail is a clear problem waiting to surface.

After reading that, if you don’t understand the relationship between the small details and precision, then God help you. You may not be concerned with that much detail, because your rifle is a self-defense carbine. That’s OK, it’s understandable. If you are an industry professional who can’t let go of the dogma and explore the possibility that yes, there are benefits to receiver lapping, then it’s inexcusable. Now there are some receivers that are likely more quality controlled than other brands, that’s for sure… but Spike’s is a will known, quality brand. Is their six-axis off? I have my suspicions it’s related to the anodizing:

Could uneven growth of surface anodizing be to blame? If there is an engineer in the house, please tell us what you think in the comments!

So, should you lap your upper receiver? Do you appreciate centered sights, evenly loaded bolt lugs, consistent barrel harmonics, barrel centered in the rail, and the potential benefit of enhanced precision? Then yes.  If you don’t want those things, then no. Don’t do it. If your rifle zero’s fairly close to dead center then you may not need it at all. You will receive too little benefit to tear down your rifle. All I know is that my rifle improved significantly in centering of the barrel in the rail and centering of the windage to a  near-neutral position. I got rid of the free float rail, and the rifle is still dead nuts to center when I re-zeroed.

If you need a tool, Brownells now carries their own in house receiver lapping tool. Check it out here.

Till next time, LOTHAEN OUT.