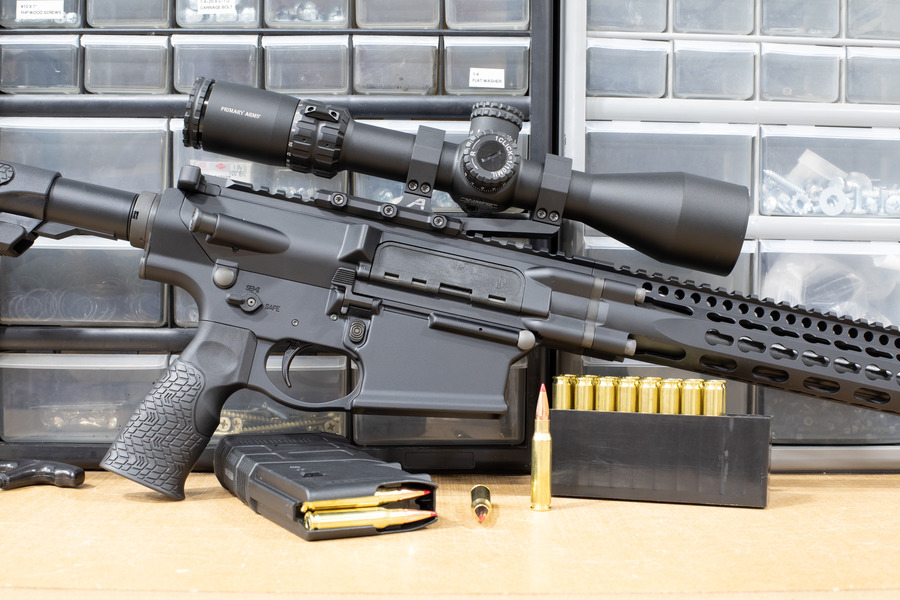 As the market continues to see supply chain concerns and sourcing issues thanks to overwhelming demand and a difficult last 18 months in the manufacturing sector thanks to concerns that were outside of everyone’s control, there are still AR-15s available.

Primary Arms offers several “in stock now” AR-15’s across a broad spectrum of use cases that allow you to find a great rifle or carbine during a difficult time for finding a gun at all, at a reasonable price.

And it will detail the audience of shooters who they might be best suited for.

The FN America FN15 5.56 AR-15 Patrol Rifle is an excellent hybrid option for those looking for some of the “old school cool” that comes from the original AR-15 design, and yet require the modern upgrades that make the AR-15 so special. This hybrid design is made by one of the preeminent military contract companies on the planet. It also features furniture from one of the most beloved aftermarket Furniture manufacturers in the AR-15 Spectrum – Magpul.

Made for a no-nonsense shooting experience, this isn’t a highly customized factory rifle, but prioritizes reliability, quality of life and harmony in value across the component parts selected by the manufacturer for this carbine. Originally meant as part of a contract offering to law enforcement agencies across the United States, this relatively standard 16-inch barrel all black A2-style carbine features some notable upgrades, while still maintaining the footprint and overall aesthetics of a standard mil-spec rifle. It still has the front A2-style sight and has an A2-style flash hider.

It also features a flip-up rear iron sight and flat top on the upper receiver to ensure optics mounting is an option, in addition to the iron sights. The Magpul MOE furniture includes an M-Lok system of mounting brackets so you can accessorize the forend appropriately.

A very reasonable price point is attached to this factory rifle, known for its high-reliability, good accuracy, and tough durability. The barrel is a chrome-lined 16-inch chrome moly vanadium steel barrel marked for the 5.56 NATO round. When you combine the basic components selection along with some of the upgrades from the FN Factory like the Magpul furniture and the FN combat trigger, you get that signature reliability and classic feel of the original AR-15, and the modern accuracy and consistency of a new factory concept piece.

A premium factory AR-15 from Daniel Defense with California compliant parts means you’re getting quite a rifle from one of the most impressive manufacturing facilities producing “made in the USA” AR-15 today. Not only has Daniel Defense invested heavily in 5 axis machinery and in-house proprietary engineering procedures that allow them to source basically every component built on their rifles in-house, but they have bought into the concept whole-heartedly.

This also gives them complete control over a mostly automated manufacturing process which sees a team of dedicated professionals finishing and custom-fitting rifles together with exceptional tolerances and a fantastic track record.

Simply having high quality machinery in-house, doesn’t equate to having one of the highest rated factory rifle systems on the market, however. Daniel Defense combines high quality engineering, good quality gunsmithing and fitment procedures at the factory, and utilizes heavy Innovation built on the back of legitimate high-volume contracts with agencies all over the world, including many in the United States.

The feedback they’re able to receive through distribution channels, dealership networks and agency contracts allows them to continually refine the process to build one of the finest AR-15s out of a factory in the United States.

Because California has some esoteric regulations regarding the AR-15 and other semi-automatic sporting rifles, it’s important that a factory rifle meets stringent requirements in order to be shipped and handled properly throughout the California-compliant ecosystem.

This means that things like the extended flash hider have to be permanently pinned and welded to the barrel to ensure a minimum overall length and barrel length. There’s also a factory-installed magazine lock which is required by California law. To remove the magazine the takedown pin for the receivers needs to be removed and the upper receiver needs to pivot forward.

However, despite some unwieldy components for many mainstream shooters, this system has been adopted heavily in California where sport shooters recognize the quality of manufacture of the Daniel Defense name.

This California compliant model also features interesting innovations and characteristics like a flared magazine well, a heavier buffer assembly, factory-staked gas key and gas system components; a rear quick detach sling swivel cup and a 12¼” M4A1 RIS Rail Interface System II (forend), that allows a lot of accessorizing potential for the rifle. The barrel is marked 5.56 NATO and the overall weight of this carbine is 6¾ lbs., and it runs on a gas impingement system.

While many shooters will recognize that the Daniel Defense rifles generally occupy a space with a premium price point, the creature comforts and user quality of life benefits that come from buying a factory fully integrated rifle like this as well as the warranty and finish quality of the Daniel Defense AR rifles means it’s directly in line as a high-value option straight from the factory.

A lot of bang for your AR-15 buck and it shoots all types of both 5.56 and .223 Remington ammunition

Many shooters already know that you cannot safely shoot a 5.56 NATO cartridge out of a 223 Remington marked barrel. The resulting overpressure can be dangerous and far from being simply a poor practice, it really is a safety concern.

One of the most interesting innovations over the years for creating harmony between the 223 Remington cartridges and the 5.56 NATO cartridges has been the .223 Wylde chambering. It allows the shooter to shoot any factory ammunition and most reloads (any that fall within factory specs) for either cartridge without concern that they’re creating a safety issue or an overpressure situation. The .223 Wylde chamber also allows a bit more accuracy from the 5.56 NATO and maintains most of the accuracy from the 223 Remington with the specialized chamber dimensions.

This Battle Arms Development Workhorse AR-15 rifle in 223 Wylde with a 16-inch barrel features a free floating rail with M-LOK handguard and a full-length picatinny rail to ensure you can mount any accessories you need to customize your AR-15.

The price point is just barely over $1K allowing you plenty of budget and a great canvas to work with, in accessorizing that rifle. As a workhorse firearm it features an ambidextrous charging handle, quick detach takedown pins, and extended mag release and bolt catch, and a B5 Bravo adjustable stock.

For the money, you’d be hard-pressed to find an AR-15 from the factory as well outfitted and able to shoot the variety of cartridges available as this particular AR-15.

The perfect AR for teaching kids to shoot on the platform

The next AR on this list isn’t a centerfire rifle. However, it does offer a lot of advantages in training new shooters or children on how to utilize the AR-15 platform going forward. Smith & Wesson has invested heavily in their M&P 15-22 sport line which utilizes a substantially similar footprint and style to the AR-15 which would normally come in a centerfire rifle round chambering like .223 Remington or 5.56 NATO.

This particular firearm allows a lot of customization with the M-LOK handguard, and it features a picatinny rail and flip up backup iron sights, allowing for any mainstream optic to be mounted easily. The caliber of choice is .22 Long Rifle which offers a mild recoil, cheap volume shooting, and an overall lower cost basis to get into the rifle then your normal mainstream centerfire AR-15s.

The incredibly easy to control and understand rifle built by Smith & Wesson allows new shooters and those unfamiliar with the patterning and use of the AR-15 an entry-level option to learn on.

Because the 22 long rifle is so easy to shoot, and the costs are so insignificant, relative to centerfire cartridges this makes for a very good transitional rifle for those who aren’t yet ready to shoot the plethora of options available on the standard AR-15 chassis. It is also a fun plinking option for those who are tired of spending their whole paycheck on a range trip due to rising ammunition prices.

Slightly lighter weight and slightly smaller dimensions afford an easy to understand and easy to use rifle which is still substantially similar to the AR-15 in its most basic format.

For those who need a transitional rifle to help move young shooters or inexperienced Shooters into the next platform level, and still want a cheap way to enjoy significant volume shooting at the range, might look at a 22LR rifle like this one.

Tactical upgrades on a flawless factory rifle from Geissele

The Geissele 5.56 super duty AR-15 rifle in green with a 16 inch barrel is a fantastic factory option for those who want something that feels overtly tactical, while still maintaining a minimalist perspective without frivolous add-ons, which offers them the ability to customize to their specific needs.

The Geissele factory is known for producing high-quality triggers and extremely functional full rifles as well as other high-end accessories and component parts. What you get when you buy this rifle is the factory’s ability to leverage economies of scale and produce a flawless rifle from factory with a ton of upgrades without having to charge for each component part at a premium.

The SUPER DUTY rifle offers a high-end fully matched upper and lower receiver with what Geissele calls the “Reliability Enhanced Bolt Carrier Group” and includes their “Stress Proof” bolt. They also put an SSA-E X group, with a lightning bow trigger into the lower receiver to ensure short, crisp trigger pulls for those who have no tolerance for a standard trigger group. The chrome lined 1 in 7 twist offers a great variability in cartridges and loads that the SUPER DUTY can shoot.

Essentially this rifle offers match quality from the factory at a cost savings, with the integrated components that one would already be spending on in the aftermarket after they bought a fully built rifle from any other factory.

If you look at it from the perspective of high-quality fit and finish, exceptional quality assurance and quality control, and the innovation of the parent company that is manufacturing the component parts, you end up with a truly high-end offering at an exceptional price that has to be customized only minimally, because you receive all the core component upgrades as part of the initial purchase.

The specific shade of green on the exterior rifle components offers a unique take on the tactical side of things and gives you something that you can truly call your own once you customize it with the aftermarket parts you desire on the front end and on top of the picatinny rail. The exceptional trigger and robust furniture as well as the premium customer service, and warranty from the company means you’re receiving a firearm that you don’t have to worry about for many years to come.

Even though it’s been a weird couple of years, and the firearms Market has been difficult to predict, and supply and demand has been wreaking havoc on the desires of sport shooters everywhere, right now is a great time to find fantastic rifles built at the factory with excellent component parts. The above five AR-15 rifles are proof to that point.

Any of them offer an exceptional user experience, and each of them offer something specific to the shooter that requires that specific slant while making a choice for their next, or even their first AR-15.