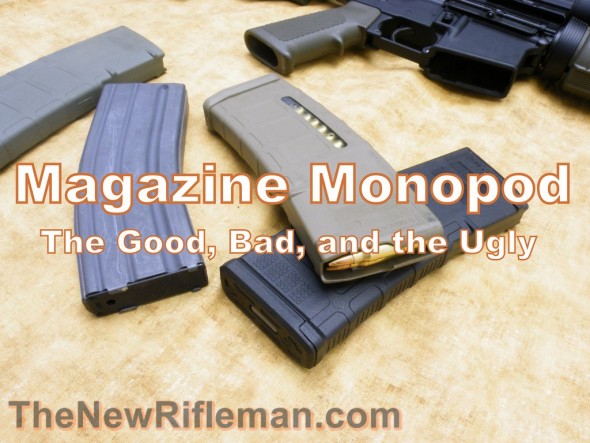 Lots of conjecture out their about magazine monopodding. There is plenty of debate over whether it will cause magazine related stoppages. I found, with my two rifles, that the issue of stoppages could be related to not only the rifle, but the brand of magazines. What are the distinguishing features of a rifle that will have failures when mono-podding vs one that will function fine?

An Easy Way to Stabilize the Shot

Monopodding the mag is a quick and easy way to stabilize the shot. Recently it has gained more and more popularity judging by discussions on ar15.com and m4carbine.net. The crux of the argument belies the old military “doctrine” of never-resting the rifle on the magazine. Various posters report thousands of rounds on a monopodded magazine and they will report the stability benefits of doing so. Others report failures to feed.

I examined my rifles to judge the suitability of monopodding the magazines and came to a few conclusions.

1) Monopodding success or failure depends on the magazine, magazine well, and also the magazine release of an individual weapon

Where do the issues lie?

I have two rifles. PSA and a Maine manufactured Bushmaster. The PSA is a flat top DD upper with a Rainier Arms mil-spec bolt and carrier. The Bushy has an surplus FN A2 upper with a Windham Weaponry bolt carrier and a Mil-Spec bolt.

Place your favorite magazine brand into rifle. Press rifle down on to magazine with decent weight. Hold down magazine catch with thumb. Cycle charging handle.

Did you feel any resistance?

The USGI has the thinnest feedlips and did not affect function in the flat top or A2. The PMAG gen 2 with the thicker feedlips scraped the bolt carrier of my flat top, but not my A2. PMAG gen 3 was the worst offender. This was interesting since the Gen 3 has Mag-well stops molded into the mag. The Gen 3 scrapes the bottom of the bolt heavily on both my A2 and flat top rifle when applying monopod pressure.

I removed the follower and spring from the magazines and repeated the test. Same results. P-Mags can introduce some friction into the feeding system.

What About the Rifle?

Factors that are in play here, I suspect, are magazine well tolerance since magazines can wiggle fore and aft (which could elevate the rear of the mags feedlips into scraping the bolt carrier), and magazine button / magazine catch placement. The PSA has more wiggle in the magazine catch assembly then the Bushmaster. It is miniscule difference, but with all the other factors combined it may be contributing.  Will problems be immediately apparent with your setup? That too depends…

So where does the extra friction lie in the reliability equation? I shot my fully loaded Gen 3 Pmags while monopoding. I pushed down heavily on to the rifle. I had no malfunctions. The velocity of the bolt carrier and a strong buffer spring were able to overcome the resistance of the feed-lips scraping the bottom of the bolt… but what if things get dirty? Perhaps you take a carbine class and the oil, dirt, and burnt powder start to increase the viscosity of your oil. The bolt carrier slows down a bit due to the grime, powder, and thicker oil.

Then you go prone and monopod the mag. You fire one shot and then possibly a Failure to feed. I didn’t put a 500-600 rounds down range at the last range session I went too, so I couldn’t test the Gen 3 Pmag further than that. For now I will stick with USGI magazines. Perhaps I will start investing in L plates as well. The NHMTG USGI mags have been 100 % in both my rifles so I will continue to buy these magazines along with Magpul followers. Some things to consider are that the mag catch area stamped out of the mag may fatigue over time and eventually the aluminum feed-lips may start scraping the bolt carrier. If that happens time to trash the magazine.

Time to start numbering magazines to keep track of trouble mags in the future.

I love PMAGs, but I won’t work them into my routine for shooting off the magazine monopod. I think I am asking for a malfunction. The stability advantage of shooting from monopod prone is great enough that I will use USGI mags for now.

Individual weapons and setups are wholly unique. Different magazines and unique rifles could deliver an equation that is unreliable under the right circumstances. It is important to test different components and find something that works well for you. My rifles like USGI magazines and the bonus is I can monopod off the magazine without introducing reliability issues. While I didn’t failures with the Magpul products during my limited testing, I feel the feed-lips scraping the bottom of the bolt carrier while monopoding will lead to reliability issues. I have learned my rifle can tolerate a magazine monopod with USGI mags. I will invest in some L plates to use this technique on hard and soft surfaces.