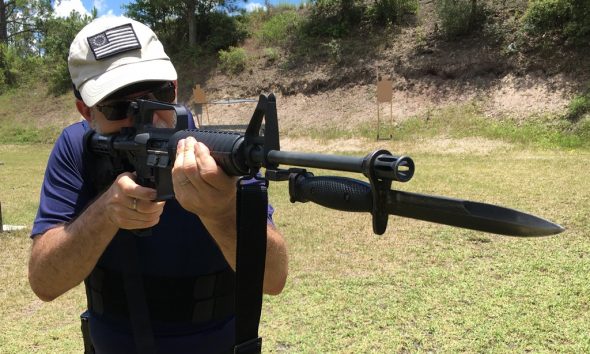 Your primary home defense rifle needs to be able to take a bayonet, and you need to have a bayonet ready to mount to it.  You scoff, of course. You think, “I’ll just shoot them.  The military hasn’t used bayonets in years”.  But I ask you to remember what you’ve seen on the nightly news for the last few weeks and think about it.  What are you going to do when you find yourself in the middle of a violent mob that will rush you and kick your head into the pavement if they decide they don’t like you?  The military may have abandoned the bayonet, but I’m not in the military. Most of the time I’m at home with my family.  I have to think about what benefits me and my situation. I have seen enough videos by now to convince me that a sharp, pointy blade on the end of my rifle is very good, for two reasons.

The bayonet is on the rifle. And the chair is against the wall.
The bayonet barely fits this 14.5″ midlength with a pinned extended flash hider… but it DOES fit.

First, it serves as a psychological motivation for people to keep away from you.  Occasionally, pointing guns at people does not seem to have an effect.  I know a man who spent time in the military over in Iraq and he commented that he could point a gun and angrily shout commands, but when he reached for his knife people started to take him seriously. Why is that?  I think it’s because most people have not been shot, but everyone has been cut or stabbed by something at some point in their lives.  Most of us understand blades at a much deeper psychological level than we do bullets. If a mob rushes upon you to do violence, a gun pointed at them may not deter them much if they don’t think you will use it (shooting it probably will), but if there’s a bayonet on the end of it, they will avoid it. If they rush you, you don’t have to take much action; they will be the ones injuring themselves. No one hates their own body, but cherishes it and cares for it. Nobody will willingly impale or cut themselves.  A bayonet is like barbed or razor wire for your person, clearly stating “STAY BACK”.  A group of friends all together with bayonets pointed outwards would be even better.  Your rifle needs a bayonet.  Your friends need bayonets too.

the classic.
just look at it.
a dangerous beauty.

Secondly, it does serve as a backup to bullets.  Years ago I went to go see the zombie movie World War Z and sat by myself in the theater to kill some time.  The protagonist has to fight zombies and he taped a butcher knife to the end of his rifle.  I thought it was silly, but he had to fight on a tight stairwell and the rifle, as a firearm, was worthless.  The distances were just too short.  The zombies were grabbing and clawing at the hero, right up in his face, and the knife on the end of the “stick” was used to deflect and push them back. All of a sudden it didn’t seem so silly anymore.  I know; it’s a movie… But it looks similar now to the video I see from Minneapolis, Atlanta, NYC, Seattle, etc.  If you can’t use your rifle as a firearm, either because you are out of ammo or the bad guys are right up in your face, a bayonet on a rifle can be useful. Your rifle needs a bayonet.

But can your rifle take a bayonet?  Maybe not, even if it has a bayonet lug.  If you have an AK, your rifle will more than likely take an AK pattern bayonet if it has the lug.  If you have a 20-inch rifle or a 16-inch midlength AR-15 with a bayonet lug, it will take an AR-pattern bayonet.  But many older 16-inch AR rifles have the shorter carbine gas system, and although they have a bayonet lug, a bayonet will not fit properly.  The end of the muzzle is too far from the lug.  The bayonet will go on the rifle, but the seating ring will sit on the thinner barrel rather than be held properly by the flash hider.

16″ carbine with an extender and bayonet. This device promotes social distancing.

Some companies make an adapter to correctly mount a bayonet to a 16-inch carbine barrel.  The one I bought is made by  Triple-R products and functions as a simple extender for the lug.  It is meant to be attached and left on the rifle.  It looks a little goofy, but it is made of blued steel and seems robust.  It was about $30 and worth the money in my opinion.  My primary critique is that it had a lot of sharp edges and corners. But I want the bayonet sharp and the mount smooth, so I spent about an hour filing and sanding it down and rebluing it. A quick-release model is also available.

The bayonet mounted to the 16″ carbine gas rifle with the Triple R mount. It seems solid. We shall see. Without the extender, the bayonet muzzle ring would rest on the thin barrel- not very effective.

But there are problem guns with no easy answer.  What about a short-barreled AR pistol, or a dissipator style rifle with a front sight base all the way out towards the muzzle?  Some companies make a short bayonet handle to fit these firearms, but they look flimsy to me.  I suggest you get a decent bayonet and cut it down to fit if you have the skills.  Another problem is a “modern” free-floated AR rifle with no front sight base or a bayonet lug. I’ve only seen a few adapters to mount a bayonet to the handguards, either Picatinny, M-Lok, or keymod, but they are either outrageously expensive or look gimmicky.  I think the best way to mount a bayonet to these rifles is just to create a blade that mounts directly to the handguard without using the lug feature at all.  I think there’s a market for this and hope companies someday offer direct-mount bayonets.  In the meantime, I hacked up a spare front sight base to get the barrel ring with the lug and then drilled and tapped it for three set screws.  It now serves on a rifle with a low profile gas block and a free-float handguard. It’s ugly, but it works.

Here’s an answer to a short-barreled rifle: a cut-down bayonet! Unfortunately, this is not for sale on cmmg’s website.

A problem rifle: How do you fit a bayonet on a free-floated rifle with low profile gas block? I cut off the barrel ring with the lug from a standard front sight base and drilled and tapped it or three set screws. It works, But if someone would make a lug or a blade that mounts directly to the handguards, that would be better.

If you want to buy a bayonet for an AR rifle, I suggest getting a surplus M7 bayonet.  They are selling right now in the $25-$50 range for used but decent.  Even eBay and Amazon have them. Occasionally new knockoffs can be found for less, and maybe less quality too.  Bud K online currently has a stainless one from China for under $20 that has decent reviews. This would be a good option for a cut-down bayonet to fit a short rifle rather than cutting up a sentimental GI bayonet.  If you want fancy, the new M9 GI bayonet and commercial ones will cost you a hundred dollars or more.  My only suggestion is NOT to buy a bayonet that either has a serrated or saw-back edge or one that has a hollow handle as a “survival” knife.  If you perform a bayoneting, the serrated or saw tooth edge will get caught on ribs or other rigid objects and be next to impossible to remove, and the hollow handle blades notoriously break.  It is true that I have no experience bayoneting anything, and have never received official government bayonet training.  But my dad fought in Korea and told a story or two. His advice was to turn the rifle sideways so that the blade goes between the ribs, parallel with them, instead of thrusting straight out with the blade edge perpendicular to the ribs, which usually resulted in a stuck blade.  But that’s all the advice I can pass along.

Surplus USGI M7 bayonet on the left and a Sarco “economy” knockoff on the right. The knockoff will work.

The riots and anarchy we see should make us consider every single tool available to us.  The bayonet has its place in the citizen’s toolbox.  Your rifle needs a bayonet.  Get one.  There are some shopping links below that will give you some options.

Side mount to modern handguards:

← First Time Gun Owner Standards
Barrel Bedding for the Precision AR-15: A How To Guide →
Scroll Up