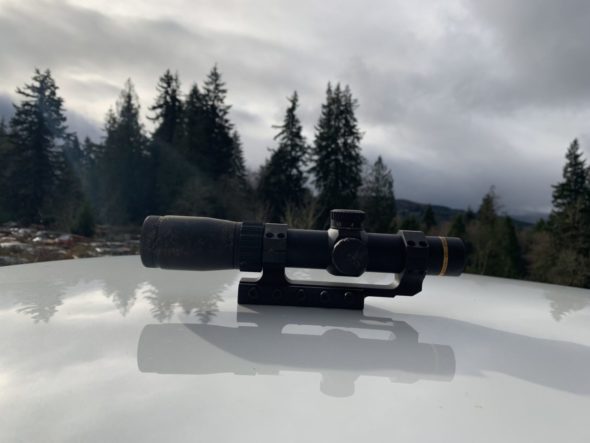 The Leupold 1.5-4 power scope is a versatile all-around scope suitable for shooters on a budget. While many models have moved to higher magnification in recent years, a 1.5-4 is still a versatile choice.  In testing, I found the VX-R Patrol to be lightweight, with crystal clear glass, and it was durable, with dependable turrets. The bright illuminated dot, easy to use reticle, and Leupold warranty lead me to believe this is a solid purchase. In keeping with full disclosure, Leupold sent me this scope to review, so shout out to Leupold for that. However, I try to not let that affect my review of the product. While I might not beat the optic as much as I would like, I still do what I can. If I owned the optic, I would beat it like a red-headed stepchild. However, I don’t have the money to pay for this optic should Leupold say I did too much damage to it, otherwise, I would buy it and then test it from the start. So here we are. Just wanted to get that out of the way.

Although I didn’t torture it as much as I could have, we still dented the earth!

Another view of the reticle on 4 power

The Leupold VXR Patrol scope is a 1.5-4 power scope with daylight bright illumination. It has an illuminated dot inside a black reticle (what Leupold is calling their Firedot MIL Ring reticle). The optic Has a field of view on 1.5x of 74.2 feet at 100 yards and 29.4 feet at 100 yards on 4x magnification. One thing that is quickly noticeable is the weight… and not because it is a porker. his scope weighs a whopping 9.6 ounces according to Leupold’s website.

Let’s dive into the individual features a little more. Starting with the illumination… it has a very bright reticle, I have been mainly testing it during the fall here in the PNW, so I haven’t had the brightest conditions for testing, but it hasn’t even been close to being washed out. I still have two or three more brightness settings to go through before I could max it out. The reticle is BRIGHT and I love that it’s just a simple dot that lights up. Too often you have competing optics lighting up large portions of the reticle and I feel like that becomes distracting. With Leupold keeping it simple, the up-close shots become more precise because I have a defined point of aim that my focus is being drawn to.

Another awesome feature are the Leupold custom dials. These dials are calibrated for a 55gr 223 bullet at 3100fps. I believe that you can get custom dials for free with this scope or any Leupold scope that comes from the custom shop? (Don’t quote me on that) The dial allows me to very effectively dial into whatever distance I want to shoot at on the fly. If I’m at 300 yards, rotate the dial into the “3” hold the dot on the target and shoot.

Good view of the elevation turret

This scope has an auto-on/off feature as well. Scopes already have such poor battery life, especially compared to red dots, that this feature becomes a lifesaver. When you accidentally forget to turn your scope off your battery won’t be drained. I’m not sure exactly how long it takes to turn off, but I haven’t had to replace my battery in it yet. I have had other scopes for review for a shorter amount of time and replaced the batteries twice. This means two things. First of all, I’m forgetful. Second of all, well I forgot already.

Just kidding, gotta love dad jokes! Scopes have a very low battery life, especially if you leave them on in brighter settings, so with the Leupold being forgetful won’t punish you with a dead optic.

Either way. If my cheap Sig Romeo5 has an auto on/off that has been nothing but reliable and I bought it for less than $150. Why can’t scopes have the same technology?

Side view of the scope. Capped windage turret and elevation adjustments max out at 5.9 mils and 650 yards due to the zero stop turret.

Now for some minor criticisms. Let’s be honest, the majority of AR15s in America have a 16” barrel. So why would we use the velocity of a 20” barrel for the pre-configured dial. That is frustrating for me, and possibly more so for the patrol carbine application.

On the reticle itself, the top half of the vertical post kind of obstructed the target and I felt like I couldn’t be as precise. I was testing another scope when I did this review, and the reticle had a donut and dot reticle for the main aiming point. I was able to be much more precise with that since I could make out just above where I was aiming and that made a huge difference.

The marked group was before I had a definitive target to aim at. Didn’t think that would lead to good results. Reshot the group at 50 yards for torture test

The Leupold VXR Patrol passed the drop test with flying colors. In total, I dropped the rifle about 10 times. It was dropped from shoulder height, on the rifle itself, each side of the scope and directly on top of the optic, there was no noticeable shift at 50 yards and it was still dead on at 200 yards on steel to confirm zero.

After a series of drop tests, the zero did not shift. Tip of the pen is 2 bullets in one hole (one from the previous group, one from 2nd group after drops)

After the drop test, I did realize that the exposed turret moved which is no big deal since the elevation turret has a zero stop… I decided to test the tracking and repeatability. After the drop test, walking to the target and back to check my work, I was rotating the turret nonstop. Got back to the 50-yard mark and had “ZERO” problems with the zero shifting.

After the drop test, I did a turret tracking test. I shot this group as the control.

After the first group, during my walk to check the results. I twisted the turret nonstop. Maxed it out in both directions MULTIPLE times. My wrist hasn’t hurt that much since I was a teenager… anyways, there was no shift at all, leading me to believe that the turrets tracked extremely reliably like you would expect from Leupold

The glass quality on this scope is great. Definitely not the best glass I have looked through (that would be the Tango6T), but it’s also not meant to compete in that range. With a price of $650 on Leupold’s website, and being able to find it for around $200 less depending on where you look, it’s well below the cost of a Tango. The quality of glass for the price range is great. I noticed no distortion around the edges and had phenomenal clarity.

The brightness of the reticle was actually very surprising for me. Today was a perfect day for testing the brightness as everything was wet from all of our rain, but the sun was shining BRIGHT on thanksgiving, and I was shooting right into the sunlight. I had no problems being able to see the illuminated dot with my eyes with the sun at my 1 o’clock. With some other scopes I have used. I have had the reticle get washed out with less harsh sun conditions, so this is a big win for Leupold!

Started the day with up drills. I was averaging .8 to 1.1 seconds

This scope is definitely a very good scope to have in your arsenal. In my opinion, I think this is a perfect short to medium range optic. With a little more work with this optic, you could very easily stretch its legs to 350 yards and further. I would say this could be a 400-500 yard optic, but that would be pushing it for most people. Being a “dot reticle” you could use it to hold over pretty easily out to 3 and then continue to hold over further, or to dial it in. You can use it as a close-range DMR scope and dial in very precisely, or use it as a good general-purpose scope. If I had the ammo, I would love to put it on a shorter AR pistol and have a very light and handy setup. I would toss this scope on a rifle and just throw it in the bed of a truck and it would be good to go.

Long story short, 0-300 yards would be this scopes prime range. But with a little practice, you could get out to 400-500 yards with ease.

The illumination control is a push button. You go all the way up, then work your way back down. Kind of annoying, but the auto-off feature helps a lot!

Leupold has been around for a very long time, they know how to make good scopes. All of their scopes are built to the same minimum standard in their own in-house torture tests. Their VXR Patrol that I have passes the same test as their $2000 scopes. While I would like to see some different reticle choices from Leupold, buying this scope, with their warranty, you won’t have to worry about much. Whether you have this on a rifle to off coyotes on the farm… Or on a rifle to get you through the zombie apocalypse. I have confidence this scope will see you through whatever you throw at it!

Got the scope nice and dirty for scientific purposes!

Check out the VXR Patrol and more Leupold products at Brownells